The Pale Orc
Azog the Goblin

Ruler of the Orcs of Moria

Kill Thorin Oakenshield (succeeded) and his Company including Bilbo and Gandalf.

Destroy the Line of Durin (partially succeeded).
Wipe out the Dwarves of Erebor, the Men of Lake-Town and the Elves of the Woodland Realm.
Steal the treasure of Erebor and take control of the Lonely Mountain for his master.

He was portrayed by Manu Bennett who also played Slade Wilson in Arrow.

Azog and his orcs took over the mines of Moria, having possibly been sent there by Sauron, and he became one of the most influential orcs in the northern lands. When the dwarf lord, Thror, visited Moria in the hopes of possibly rebuilding it, he was captured and brought to Azog. Declaring Thror a thief, the goblin had him tortured for two days, killing and beheading him upon hearing of more dwarves outside Moria. The orc proceeded to call out to the dwarf, Nar, from over the gates, that those who tried to steal from him would meet the same fate and that he was the king of Moria. Azog even refused to let Nar take Thror’s head back, throwing a sack of coins at him to scorn him, and ordered his goblins to hack up Thror’s body and feed it to ravens. This action would generate incredible hatred for Azog amongst the dwarves and Thrain, Thror’s son, would mass an army of dwarves in war against the goblins. After nine years, Azog’s forces in Moria met the dwarves in battle and he was finally killed in the fight by Dain Ironfoot, after killing his father, Nain.

At some point, Azog and his orcs took over the mines of Moria. When Thror led his people to try and take over Moria, the Pale Orc engaged them and slaughtered many of them. Azog himself engaged Thror, having become determined to wipe out Durin’s descendants. He succeeded in killing Thror, driving his son, Thrain, mad with grief and causing the dwarves to retreat. Azog then engaged Thorin Oakenshield, who struggled against the Pale Orc and was soon forced to replace his shield with an oak branch to defend himself against the orc's attacks. However, Thorin refused to fall, and eventually managed to slice off Azog’s left arm. Badly wounded and enraged, Azog was dragged back into Moria by his orcs, while the dwarves rallied and defeating what was left of his forces, though they were almost utterly wiped out. Thorin believed Azog dead, but he lived on and swore revenge on the dwarf, though was unable to track him down for 60 years. When Azog and his forces came down from the North, they began fighting with the skin-changers. Eventually Azog turned this into a sport, capturing skin-changers to torture for his amusement, and managed to drive them into near extinction, leaving only Beorn.

The Hobbit: An Unexpected Journey

Eventually, Azog’s forces learned of Thorin’s expedition to reclaim Erebor and a group of them managed to corner the company, only to be driven off by the elves. The survivors, Yazneg and Fimbul, returned to Azog, who was angered by their failure and threw Yazneg to some of his Wargs to be devoured. He then ordered his forces to find the dwarves, offering a bounty to anyone who brought Thorin to him. Azog managed to track Thorin’s Company to the Misty Mountains after being informed that the Great Goblin had captured them. He came across them after they had just escaped from the mountains and managed to corner the group on a cliff, forcing them to climb into some trees. Azog ordered his Wargs to kill them all except Thorin and they eventually forced the company into one tree, hanging precariously over the cliff. Thorin came out to fight Azog, but he was unable to match the Pale Orc, who struck him repeatedly, sending him to the ground. He ordered one of his minions to take Thorin’s head for him, but Bilbo and the other dwarves suddenly leapt to his defense. Before Azog’s forces could overwhelm them, the Great Eagles suddenly came to the company’s aid, carrying them to safety and killing the orcs and Wargs, but Azog survived, though he was enraged that his prey had escaped them.

Azog continued to pursue the dwarves with his pack of orcs coming close to catching them. However the dwarves managed to take shelter in the home of Beorn and Azog found himself unable to attack, due to Beorn taking form of a giant bear guarding the house. Azog planned to attack them on the road again, but Bolg arrived, informing him he had been summoned to Dol Guldur at the behest of the Necromancer. Azog went to the fortress, where an army of orcs was being assembled and spoke to his master. The Necromancer told him their time would soon come and Azog would lead his armies forth. The Pale Orc asked about Thorin, reminding his master that he'd been promised the dwarve's head. The Necromancer simply replied that soon all would be slain, before withdrawing. Unwilling to give up the hunt, Azog sent Bolg to hunt Thorin and his company instead. Much later, when Gandalf arrived at Dol Guldur to investigate, removing the concealment spells the Necromancer had placed, Azog waited with his troops, before ambushing Gandalf and managing to disarm him. However Gandalf used his magic to escape Azog, fleeing into the fortress, and the orc sent his forces after him. But the Necromancer managed to subdue Gandalf personally. Afterwards, Azog led his master's army out of Dol Guldur, heading towards the Lonely Mountain.

Azog approached Erebor with his vast orc army while learning from Bolg that an Elf army under Thranduil was also approaching. Azog told Bolg to head to Gundabad and ready their other army. When the battle occurred, Azog commanded the army from the north, using flags from atop Raven Hill. He sent part of his army to attack Dain's dwarves and the other half of his force to take Dale, splitting the allied armies and resulting in the death of several women and children.

Thorin, who was at first suffering with dragon-sickness inside Erebor, charged out into the battle and joined up with Dain. He decided to kill Azog and send the army into chaos without a leader. He took Fili, Kili, and Dwalin and they rode up to Ravenhill on mountain goats. Kili and Fili scouted the ruins of the fortress there, but Fili was captured by Azog, who impaled him through the chest before being attacked by Thorin, Kili, Dwalin and Bilbo, the latter having just arrived to warn of the army led by Bolg. Kili attempted to avenge his brother, but was killed by Bolg who was slain by Legolas Greenleaf. Thorin then engaged in an epic duel with Azog to avenge Fili's death. He managed to throw Azog down the hill but Azog struck a fearsome blow with his mace, knocking Thorin onto the frozen lake.

Azog held back, sending several orcs to kill Thorin, who was assisted by Legolas firing arrows from a stone tower. Thorin was almost slain on the edge of a frozen waterfall, but Legolas aided him by throwing the sworc Orcrist to him. Azog then engaged Thorin in a climactic fight to the death, this time using a massive flail instead of his mace. His blows cracked and shattered the ice, allowing Thorin to dodge around him. He then picked up the heavy stone on the flail and tossed it back at Azog, causing him to sink into the water beneath the ice. As Thorin followed his apparently lifeless body floating beneath the ice, the orc's eyes closed and he appeared to have died.

However, Azog used this as a deception, stabbing Thorin in the foot through the ice with the blade on his left arm. He then burst through the ice and attempted to impale the dwarf with the same blade, but Thorin used Orcrist to hold back Azog's weapon. Eventually his strength gave out and Thorin was mortally wounded by the orc - but this also allowed him to fatally stab Azog through his armor and right through his heart. As Azog collapsed onto the ice, Thorin drove the sword through his body and right through the ice, leaving Azog pinned to the frozen surface of the river. Azog met Thorin's gaze a final time before finally dying.

Azog also appeared in the 2014 video game Lego The Hobbit and has officially been released as a Lego mini-figure in the Lego Hobbit sets 79014 (Dol Guldur Battle) and 79017 (The Battle of the Five Armies).

Azog is much stronger and more aggressive than a human, which makes him a fearsome opponent. He primarily wields a mace and has a metal arm forced into his arm where his hand was severed. After taking command of the Necromancer's orc armies, Azog wears armor and has a large blade where his prosthetic hand used to be. He demonstrates himself to be a very capable and cunning commander and also rides a huge white Warg. 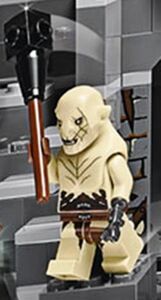 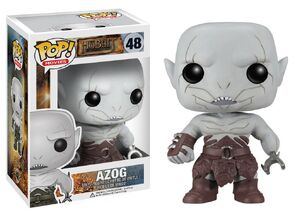 Azog and Thorin fighting for the first time 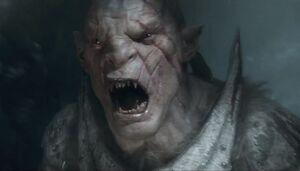 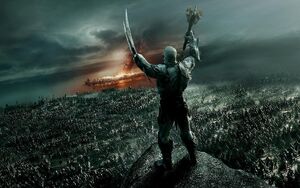 Azog's death at Thorin's hands.
Add a photo to this gallery 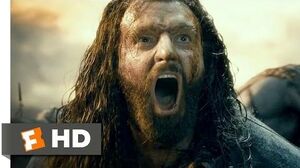 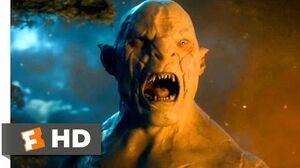 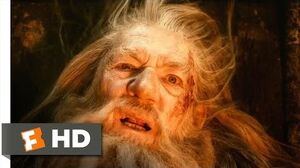 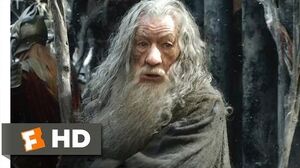 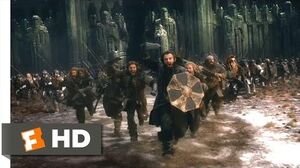 The Hobbit The Battle of the Five Armies - To Battle! Scene (5 10) Movieclips 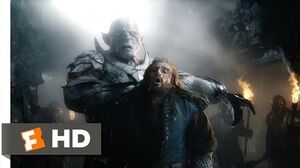 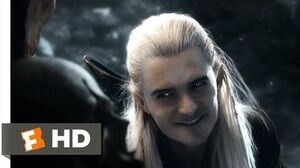 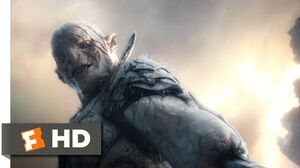 Retrieved from "https://villains.fandom.com/wiki/Azog?oldid=3489310"
Community content is available under CC-BY-SA unless otherwise noted.