Knight of the Order of Saint Dumas

Watching Batman and learning his tricks

Kill Batman.
Become the new Batman.
Deliver "Divine Justice" upon Gotham's criminals.
Confront the order for brainwashing him (all determinant).

He is voiced by Khary Payton, who also voiced Killer Croc in Arkham Origins.

Watchers in the Wings

When Bruce Wayne is brought into Arkham City, Azrael watches him from a nearby rooftop. During Batman's time in Arkham City, Azrael studies him closely. Batman encounters him on four points in Arkham City, but everytime he approaches Azrael the latter disappears in a cloud of smoke, leaving a mysterious sign behind. After analyzing all four signs, Batman tracks Azrael down to the church, where Azrael confronts him. Azrael reveals that he has closely watched Batman and has come to deliver a message:

After delivering the prophecy to Batman, Azrael once again disappears in a cloud of smoke and is not seen again for the rest of the game. However, Batman keeps Azrael's prophecy in his database.

Heir to the Cowl

Nine months later on Halloween, the Scarecrow attacks Gotham along with a group of other supervillains. While trying to defeat them, Batman finds a burning bat symbol on a rooftop and investigates to find out whether it's a message or a threat. Arriving on the roof Batman finds Azrael kneeling near the symbol. He tells Batman that the prophecy has come true and that Batman will not survive the night. Azrael claims that he has been sent to become Batman's successor and Batman considers it, claiming that Azrael must first prove his worth. He loads a simulation in which Azrael must fight groups of enemies without being hit. After Azrael has passed, Batman tells him to contact him again if Azrael is ready for the next challenge. During the game, Batman must watch out for the burning bat symbols to find Azrael again.

After collecting sufficient data, Batman heads to the clocktower to find out more about Azrael. While analysing the data, Batman finds out that Azrael has been sent by the Order of St. Dumas, seemingly to learn from Batman to take his place. However, while investigating a microchip that had been implanted into Azrael's brain, Batman realises that Azrael's true mission is to gain Batman's trust and then kill him, as the Order believes that Batman's refusal to take life prevents criminals from facing true divine justice. Turning around, Batman sees that Azrael has entered the clock tower. Batman appeals to Azrael, claiming that he has been manipulated by the Order and that he can choose not to follow their orders. It is up to the player whether Azrael realises that he has been brainwashed and sets out to get revenge on the Order, or whether he tries to kill Batman and is defeated and arrested at the GCPD. 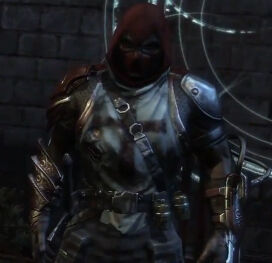 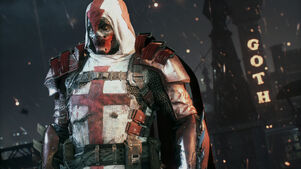 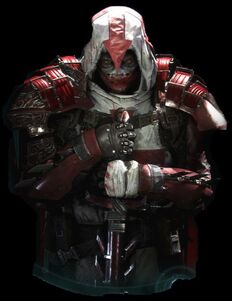 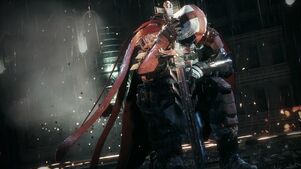 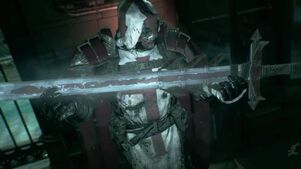 Azrael with his sword.