Arm wrestling (he has never lost in it).

Have some fun fighting.

Get his revenge on Kokonoe and Tager.

Azrael is an antagonist introduced in BlazBlue: Chronophantasma. A muscular man nicknamed the "Mad Dog" who enjoys fighting to an obsessive degree, he is addicted to finding strong opponents and committing a battle between life and death. Due to his superhuman strength, he likes to impose limiters on himself to enjoy the battle. He has no distinction of friends or foe, and will attack anyone on sight.

Azrael in fact belonged to Sector Seven. However, his destructive tendencies along with his friendly fire rates caused him to be locked away in prison. After Takamagahara's destruction, someone from Sector Seven saw it fit to release Azrael to the battlefield once more. Despite being under Sector Seven, a group opposing the Novus Orbis Librarium, the game already branded Azrael as one of the antagonists of Chronophantasma.

Azrael is a member of Sector Seven who mostly moves from one place to another to find opponents. He is obsessed with using only raw power to fight, but cannot pull all the stops, due to his superhuman strength. He wanted to search for the Azure Grimore, which is used by Ragna the Bloodedge.

After a phone call by Relius Clover, Azrael is released from prison for him to take Ragna the Bloodedge's Azure Grimoire, but is warned by the heads of the corporation he cannot go all out with fighting, placing a limiter on him that makes him unable to fight those who do not want to fight, barring Ragna, Kokonoe and Iron Tager. After being told that he was frozen for around two years, Azrael becomes angered and tries toattack on the staff who released him, but fails due to his limiter. After accepting the fact, he is told he must take the Azure and take out Kokonoe and Tager for concerns of treason. Despite his limiter, and that he was inactive for a long period of time, Azrael easily destroys a soldier's arm with a "gentle pat" minutes after he's released.

Immediately after, the begins to search for Kokonoe, breaking into her laboratory, but teleports away after Kokone tries to use her Assaulting Broken Bunker on him.  Because of this, Azrael continues his hunt for her and TR-0009.

During his search, Azrael runs into Bullet and recognizes the emblem on him, saying he remembers it. After Bullet asks where he last saw it, Azrael replies that he cannot say, since he does not remembers people he beats. Azrael then says that he heard that Bullet was also trying to find Kokonoe, but Bullet does not reveal where she is, and fights Azarel, much to the man's glee. After realizing that she cannot beat the man, Bullet uses a smokescreen bomb to escape, as Azrael resumes his quest once more.

Traveling to Yabiko's downtown, he finds Tager with Litchi Faye-Ling, and knowing that fighting Azrael is a horrible idea, runs away with Litchi, but are interuppted by Nu-13, who is there, to deliver Litchi to Relius Clover. Knowing that she cannot save them both quickly, Kokonoe teleports Kagura Mutsuki to there for a distraction. With Tager planning to set up the teleport,  Azrael and Nu team up to duel Kagura and Litchi, Tager finishing and teleporting the heroes after they were close to losing. Now alone, Azrael and Nu are deadlocked until Hazama arrives, jokingly asking if they are going to propose. Later, Azrael comes across Celica A. Mercury and Hakumen near the Lakeside Port. In a bold attempt to  keep Celica safe, Hakumen fights Azrae, but Celica sets up a Light Screen to flee with Hakumen after a impasse.

Kagura then starts a tournament called "Battle of Ragna the Bloodedge"  to trick Azrael so Kokonoe can deal with the brute. The plan works without a hitch, but when Bullet is planned to fight Bob, Azrael, having bested pretty much everyone, entered the tournament to have have fun and defeat Bullet, beliving since she was going to steal his foes..Bullet accepts his idea to find her, and after Bullet asks if Azrael knew her in the past, the man replies that he  doesn't just find her unit's emblem familiar, but also said that he was requested to help them in the past, where he betrayed them, but one managed to get away from him. After asking where this happened, Azrael reveals it was a few years before he was imprisoned. With all the answers she needs, Bullet fights the man but loses horribly, as Azrael continues to pummel Bullet, with Tager and Ragna having to watch. After several failed attempts to teleport Bullet away, Ragna jumps to fight the man, as Bullet is warped away.

Azrael is enraged that Ragna doesn't unleash his Grimoire, but upon seeing Celica, threatens to kill the girl if Ranga doesn't use his Azure. When he isn't met with a response, Azrael tries to attack Celica, but Rachel tosses Gil towards his attack, saving her.  Ragna then prepares to uses the Grimoire, but after getting flashbacks of the possibly natsy outcome of it due to their previous fight, he decides to not use it.  A now furious Azrael insults the man for now using it due to he thinking Ragna would understand the agony of now pulling all the stops. Kagura then fights Azrael, and when she is knocked out for a second, but Azrael is unable to exploit this due to the limiter. enters the arena and fights with Azrael, but during the fight, Kagura lost consciousness for a second. During said second, Azrael is unable to resume his relentless assault due to his limiter, Kagura getting the idea to just not fight, causing Azrael to be even more angry. Before he can release his rage, however, Kokonoe teleports him to Tager, so he can punch him as a stress reliever. After the punch, Kokonoe then teleports the man into a "dimension prison" to keep him locked up.

Having escaped his prison, Azrael teamed up with Hades to defeated the Qualified, Hades promising the man that she can open a door to the gods. Inside the Embryo, Azrael duked it out with Kagura, but was defeated by was bested by both him and Jin. Trinity then warped Azarel back to his cryogenic cell.

Azrael adores strength and fighting, and treats the battlefield as a "hunting ground" to find powerful opponents to best. He is also arrogant, challenging the Six Heroes, and when he does, he holds back in the fight. Despite his nature, his dislikes it when people pick on people weaker than them. He seems to be entertained by strong opposition. In battle he can not contain himself, and he will attack anyone, friend or foe. For him the battle is not about victory or defeat, but rather life and death. When he loses, he is shown to be disappointed or angered, the latter being rather annoyed when he was defeated by Kagura, but expresses happiness afterward, as he felt what it's like to lose.

Azrael is a man with a muscular build littered with tattoos, blue hair, red eyes, and a blue goatee. As his attire, he wears a white coat positioned over his shoulders, white pants with two belts, and white boots with golden toes.

Azrael possesses immense natural strength which he uses to combat opponents instead of weapons or mystical advantages. Azrael also possesses equally immense durability to complement his drive to battle powerful opponents. His raw physical power is so great he must wear multiple limiters to limit himself from quickly killing his foes. In his Arcade ending, it is revealed that the power limiters he uses are in fact the tattoos that adorn his body, which are actually a seal known as Enchant: Dragunov. Azrael's Drive is The Terror, where he can reveal weak points on his foe. His Over-Drive named Mind Colosseo, is a mental attack where he always reveals a weak-point on the foe.

Azrael has been shown to be one of the most powerful beings in the BlazBlue universe. Even with Enchant: Dragunov limiting his power, he easily defeats Jin Kisaragi, Iron Tager, and Valkenhayn R. Hellsing. He also overpowers Rachel Alucard and is strong enough to force Ragna into activating the Azure Grimoire to fight him. 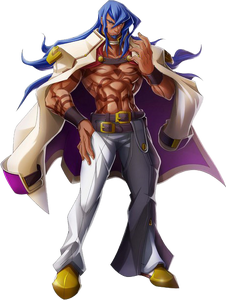 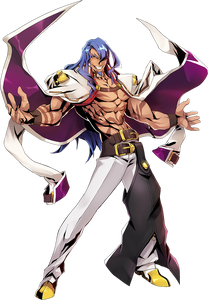 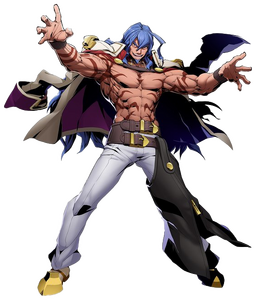 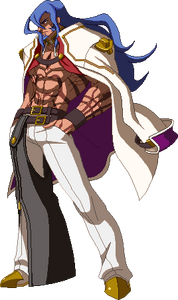 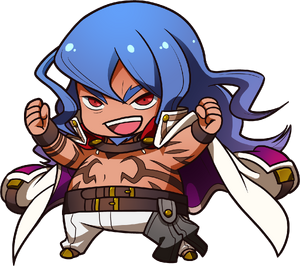 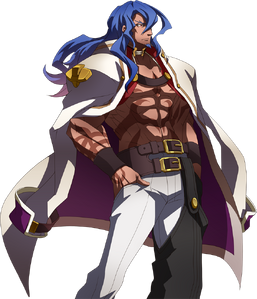 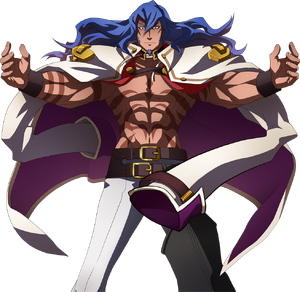 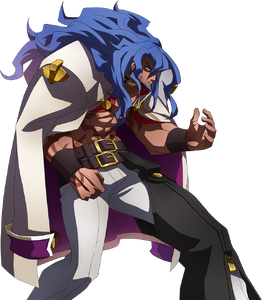 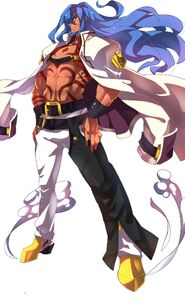 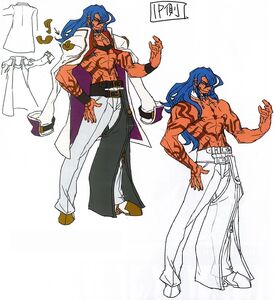 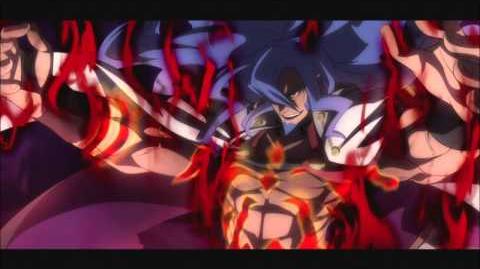 Retrieved from "https://villains.fandom.com/wiki/Azrael_(BlazBlue)?oldid=3556610"
Community content is available under CC-BY-SA unless otherwise noted.