Azro (also known as Shorty) is a gypsy and the main antagonist in the 1994 film Monkey Trouble. Unlike other characters, Azro's name isn't mentioned, but he does use an alias by the name of "Dr. Benjamin Stevenson" to report his missing monkey and to keep his name hidden. He's divorced, lives on the streets in his trailer, and is an alcoholic.

He was portrayed by Harvey Keitel.

Azro's wife divorced him due to keeping a capuchin monkey named Fingers (later named Dodger by Eva, the film's protagonist), around the house and hated him for keeping him around. To get money, Azro would put on shows on the beach with the monkey where people would give him money. He trained Dodger to be a Klepto and to steal money and anything valuable such as wallets, jewelry, gold, or silver. After Dodger runs away one morning after being mistreated brutally by Azro, Azro gets a job offer by two mobsters, who request the use of Dodger to help steal some high priced goods.

After discovering that he's run away, he spends the week trying to find him but doesn't have any luck until the weekend, where he discovers that he's been staying with Eva. Then after finding out that Eva's been taking him to the pet shop daily, he visits the shop and captures Dodger, then picks his son Mark up then heads over to the "big boss'" office to demonstrate what Dodger can do. First he meets with the boss' henchmen Drake and Charlie to demonstrate Dodger's theiving, but Dodger was taught by Eva that stealing is wrong and Dodger refuses to take any valuables. When Drake and Charlie are summoned into the office by the boss' assistant, Azro and Dodger sneak out of the office right away.

Dodger escapes from Azro's trailer, which is towed by his pickup truck, but then a pedestrian alerts him and then Azro and Mark search the park for Dodger.  Azro eventually comes up to Eva and asks her where Dodger is and she doesn't know. He then tells her that he doesn't steal anymore and kidnaps her and escorts her around the park to find Dodger. Eventually the cops and Eva's family finds her and then Azro tries to escape, but is encountered by Drake and Charlie. Then the police and Eva's stepfather Tom, who is a police lieutenant, arrests Azro and then discovers some stolen jewelry that Azro had on him including a pendant belonging to Tom's wife Amy. 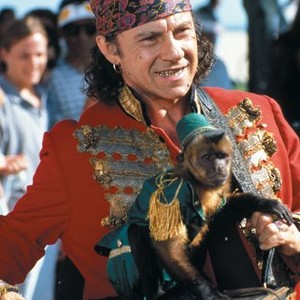 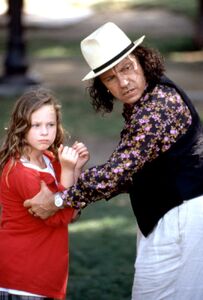 He kidnaps Eva, thinking she knows where the monkey is.