Assistant to the Ark

Revive the Ark (succeeded)
Start a war between humans and Humagears. (failed)
Create multiple incarnations of the Ark within humanity.

Despite the Ark later being destroyed, Azu would continue to influence events in pursuit of her goal of bringing about the next incarnation of the Ark from humanity's malice.

As with Izu, she is portrayed Noa Tsurushima.

Azu was created by the Ark at some point based on data from Zero-One's secretary Izu to gather data for its revival and to serve as a backup in case it was destroyed.

Posing as Izu, Azu approached Aruto Hiden to get data on Zero-One, which she in turn relayed to the Ark.

With the four members of MetsubouJinrai.NET all reactivated, Azu revealed herself, introducing herself to Horobi as the Ark's "executive assistant" and "secretary" and saying she was there to get data on each of the MetsuouJinrai.NET members' Singularities in order to use it to further the Ark's revival. Having gone to Horobi first, Azu questioned him on what triggered his Singularity and asked if it had anything to do with his original purpose as a Father-Type HumaGear, but Horobi simply stated he existed only to serve the Ark. However, after Azu reminded Horobi of the time he saved Jin without any prompting from the Ark, Horobi realized that that did have something to do with his Singularity and Azu was able to gather his Singularity data for the Ark's revival.

Azu then approached Ikazuchi for his data on his Singularity and collected it after making him remember that his Singularity was due to his "younger brother" Spaceman Subaru. She then went to Naki and extracted the Singularity data on Naki's desire to help other HumaGears fulfill their dreams.

With Singularity data on three of the four MetsubouJinrai.NET members collected, all Azu had left was Jin. She initially tried to fool him with a simulation of Aruto Hiden and attempted to get him to reveal who rebuilt him, as it wasn't the Ark, but Jin saw through the simulation and made Azu reveal herself. Azu introduced herself and stated she did not have any idea on what made Jin reach his Singularity. Jin answered that it was simple, his Singularity point was Horobi and his apparent death triggered his full evolution.

After Jin allowed Azu to collect his data, Azu returned to the Ark with the data she had been sent to gather. Azu told the Ark that she had collected all the Singularity data, to which the Ark affirmed that everything had gone according to what he had predicted.

Following the Ark's seeming destruction, Azu broadcast a simulation to Izu and Jin showing Horobi become Ark-One and the next incarnation of the Ark. After Izu deduced that it was a simulation, Azu appeared to her and revealed that it was not Zea that was behind the simulation but the Ark. Azu then declared that the Ark would be revived before disappearing. Later, after Horobi destroyed Izu and Aruto was grieving over her death, Azu appeared to him and, referring to him as "Ark-sama", handed him the Ark-One key, which he used to transform into Kamen Rider Ark-One. After intervening in the chaos going on in the city and brutally defeating Kamen Riders Vulcan, Valkyrie, Jin and Horobi, along with the army of Magia Horobi had summoned, Aruto returned to Azu and detransformed, still in despair over Izu's death.

After Aruto Hiden returned from his attack on MetsubouJinrai.NET's base to get to Horobi, Azu attempted to approach Aruto again but was rebuffed by him, who stated she was not Izu. Azu questioned Aruto as to why he was being so hostile, saying she had even changed her hair to green to make him more comfortable, but Aruto simply told her to leave him alone before heading off to confront Horobi once more. After Kamen Rider Ark-One unwittingly destroyed Jin and sent Horobi into a spiral of grief, Azu approached Horobi and took advantage of his sorrow and malice to corrupt him into another Ark.

Azu supplied Horobi with the Zetsumetsu Driver, granting him the power to transform into Ark Scorpion. Manipulating Aruto and Horobi into battling each other, Azu hoped to set off a full blown war between humans and HumaGears in order to use the malice from it to revive the Ark. As Aruto transformed into Kamen Rider Ark-One to face off against Horobi as Ark Scorpion, Azu made sure the battle was broadcast across the city in order to incite HumaGears to rise up and begin rioting.

However, during the fight, Aruto recalled his memories of Izu and inexplicably refused to fight back against Horobi, instead letting him defeat him as Ark-One. As Azu was confused as to why Aruto was not fighting back, Jin's AI suddenly appeared, having been restored by Yua Yaiba, and explained that Aruto was allowing Horobi to defeat him in order to overcome his malice and show Horobi a different way. After Aruto was beaten and the Ark-One Driver was shattered, Aruto pulled out the Zero-One Driver and used it to transform into Zero-One once more. As Zero-One, Aruto fought and defeated Horobi, ending the cycle of hatred and bringing about peace between humans and HumaGears, foiling Azu's plans.

Azu later appeared to supply a new Driver to a mysterious man, granting him the power to transform into a new Rider called Kamen Rider Eden.

Following the defeat of Syncnet, Azu approached Lyon Arkland, CEO of ZAIA Enterprise's main branch, to be her new candidate for the next generation of the Ark. She conspired with Lyon to kidnap Jin and mass-produce military-type HumaGears (nicknamed "Solds"). However, Lyon had no interest in becoming the next Ark and deactivated Azu shortly after making his true goals known.

After her death, she was given a proper funeral by Jin and the other members of MetsubouJinrai.NET. 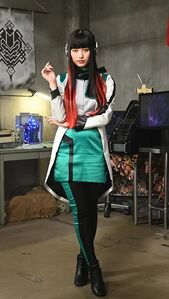 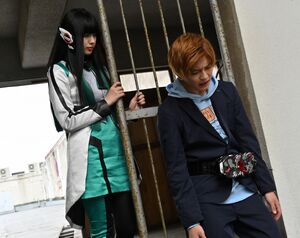 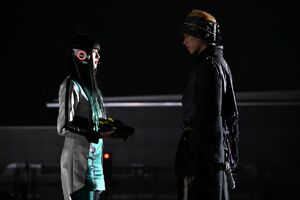 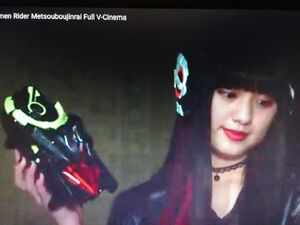