Conquer the world just like his father, Sozin (failed).

Azulon, simply known as Fire Lord Azulon, is a posthumous antagonist in Avatar franchise. He is the father of both Iroh and Ozai, as well as the grandfather of Zuko, Azula and Lu Ten. He was also the father-in-law of Ursa and the son of Sozin.

Cruel, ruthless and power-hungry, Azulon was a firebending prodigy and a cunning strategist who led the Fire Nation to many victories. Azulon reigned for almost the entire duration of the Hundred Year War, and his actions directly resulted in the near-complete annihilation of the Southern Water Tribe, specifically its waterbenders.

He was voiced by the late Walker Edmiston, who also played Enik in the Land of the Lost TV series, and Catso in Runaway Ralph.

Azulon was born to Fire Lord Sozin and his unnamed wife (or concubine) sometime after Sozin's Comet arrived. Azulon was a firebending prodigy, and was personally trained by his father. In his time, Azulon was considered to be one of the best firebenders in the world, and no one would dare challenge him.

Azulon then became a successful general in the Fire Nation Army, and as a general he was even more ruthless than his father. His leadership in several Earth Kingdom military campaigns (particularly the conquest of the Hu Xin Provinces and the Battle of Garsai) won him great respect, and expanded the Fire Nation's colonies greatly. After Sozin died, Azulon was crowned Fire Lord. During his years as Fire Lord, he was responsible for the genocidal attacks on the Southern Water Tribe which nearly wiped out all of the waterbenders. Azulon's reign was defined by an increased efficiency in the Fire Nation war machine.

When his first-born son, Iroh, lost his only son in the Siege of Ba Sing Se, Ozai tried to usurp Iroh's birthright, stating that his children are alive. Azulon, outraged, ordered Ozai to murder Zuko to see how it feels to lose his son. However, what Azulon didn't know was that Ursa, Ozai's wife, had heard about this and was unwilling to let her son die. Knowing that Ozai wanted the throne, she provided Ozai with a poison that he used to kill his father, thus saving their son but making Ozai the next Fire Lord.

Despite his short appearance in the show, Azulon was characterized as cold, inhumane, calculating, and merciless (much like his son, Ozai and grandaughter, Azula). Even his own people thought that Azulon was uncaring and frightening. As he was a prodigy in both firebending and military strategy, Azulon demanded perfection from those under him. He continued most of Sozin's policies, ruling the Fire Nation autocratically and through fear. In general, he was regarded as a very capable leader by his subjects. The Great Gates of Azulon, that guarded the Fire Nation Capital, were built in his honor.

Azulon was obsessed with power, and never stopped trying to attain more, even as an old man. Even his second son's marriage was arranged specifically to ensure a powerful bloodline. While his father, Sozin, had attempted to use the Fire Nation to better the world, Azulon was instrumental in shifting the direction of the war to use the world to better the Fire Nation. Fitting to his ruthless nature, he did not let the death of innocent civilians restrain his efforts in winning the war.

In his later years, Azulon became even more distant and bitter towards the people around him, even his own family. Azulon was especially distant to Ozai and his children, as he referred to Ozai showing off his children as "pomp". However, Azulon was shown to deeply respect Iroh, and did not seem to blame him for abandoning the seige of Ba Sing Se. Azulon was outraged that Ozai would attempt to usurp his brother's birthright, as Iroh had just suffered the loss of his son. Azulon's cold treatment of Ozai inadvertantly led to not only his own death at Ozai's hands, but also Ozai's dysfunctional and controlling relationship with his own family. 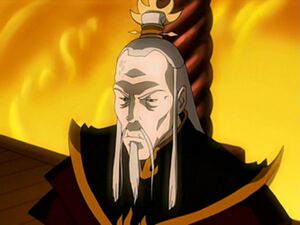 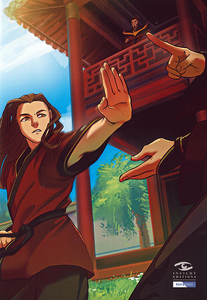 Azulon received firebending training under the supervision of his father, Fire Lord Sozin. 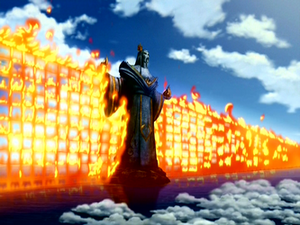 The Great Gates of Azulon feature a statue of Azulon in the middle. 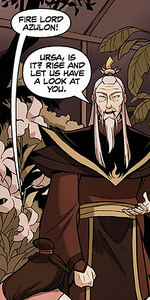 Azulon warmly greeted Ursa before telling her the reason for his presence. 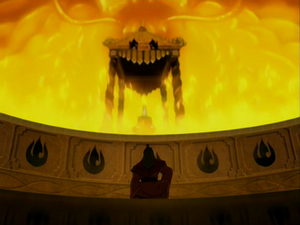 Azulon demanded respect from those around him, including his son, Ozai. 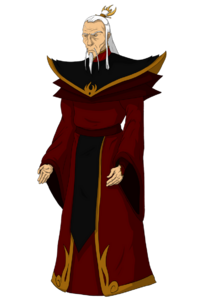