Remain of being the King of the Wuji Kingdom.

The Azure Lion (in Chinese: 青毛獅子), also known as the Lion-Lynx Demon (in Chinese: 獅猁怪), is a recurring antagonist of the 16th-century Chinese classic novel Journey to the West by the late Wu Cheng'en, and its multiple adaptations. He is the steed of the bodhisattva Manjusri, who had ascended into the mortal realm and caused trouble twice.

In the 1986 classic adaptation series, he was portrayed by Dong Honglin as the Lion-Lynx Demon, and Jia Shitou as the Azure Lion Demon.

The Lion-Lynx Demon at Wuji Kingdom

Years ago, the King of the Wuji Kingdom (烏雞國) was going to be promoted to be a deity by Manjusri, who posed as a regular monk. The King, however, unsure of him being good, tied Manjusri up and drowned him into the water for three days, until when he was rescued by the Buddha. The Buddha ordered the Lion to ascend into the mortal realm to let the King pay back for it. Here, he posed as a Taoist, save the Wuji Kingdom from a drought. The King thus promoted him as his brother-in-arm. One day, during a walk with the King in the royal garden, the Taoist threw a magical orb into a well, lured the King to see it and then pused him into the well as well, and impersonates him for 3 years. Three years later, the ghost of the dead king appears to the recently-arrived Xuanzang in a dream and begs him for help. Xuanzang, Wukong and their party managed to revive the King, and expose the demon's true identity. After a long fight, the Lion-Lynx Demon disguised as Xuanzang, but Zhu Bajie managed to deduce the fake one by a special cite that used to keep Sun Wukong in control, that only the real Xuanzang knew. Afraid, the Demon tried to flee, only to be then surrounded by Xuanzang's students. As Wukong is about to kill him, Manjusri showed up, told him to stop and explained the reason of his works to Wukong. Manjusri then took the Lion back to Heaven.

The second time Xuanzang's party met the Lion, he is now a demon king at the Lion Camel Ridge, along side the Yellow Toothed Elephant and the Golden Winged Great Peng.

When Wukong and Zhu Bajie fought the three demon kings, the Azure Lion eventually swallowed Sun Wukong, much to Zhu Bajie's horror. However, the Monkey King managed to cause trouble inside his stomach. The Lion then pretended to agree to open his mouth and let Sun Wukong out, but secretly intended to bite him to death when that happens. However, Sun Wukong sticks out his weapon instead and the demon breaks his teeth after biting on the staff. Sun Wukong later creates a long rope, ties it around the demon's heart and plays with it after leaving the demon's stomach forced the Lion to agree to bring his party through the mountain. However, the Golden Winged Great Peng managed to trick them and capture them, planned to eat the entire party. After numberous humiliating defeat under the hand of the three Demon Kings, Wukong was forced to met the Deities. The Azure Lion is eventually subdued and taken back once again by Manjusri. 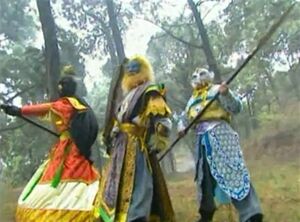 The Azure Lion, along with his fellow demon kings in the classic 1986 adaptation series.
Add a photo to this gallery

Retrieved from "https://villains.fandom.com/wiki/Azure_Lion_Demon?oldid=3533177"
Community content is available under CC-BY-SA unless otherwise noted.