Planning skills
Can control heavy machinery, such as cranes

Comming up with elaborate ways to kill Egon Olsen.

Get the Franz Jäger train wagon back (failed).

Bøffen (Danish for The Steak/Beef) is one of the two primary antagonists (together with Bang Johansen ) of the Olsen Banden film series. He first appears in the 6th movie as a supporting antagonist and has appeared in all the following Olsen Banden movies except the 13th one.

He was portrayed by Ove Verner Hansen.

Bøffen is the most prominent antagonist in the Olsen Banden series, and the arch-nemesis of Egon Olsen.  Bøffen can almost be described as a little kid. Whenever he gets hired he gets excited and when he is talking with Egon, he always tries to annoy him.

He frequently tries to kill Egon, which he does this in James Bond villain fashion, where he comes up with an elaborate way to dispose of him, but always takes so long that he gets defeated by Benny and Kjeld, Egon's two sidekicks, in the meantime. Some of these schemes include drowning Egon when he's attached to a crane, trapping him on the outside of Copenhagen Town Hall Tower, and slaughtering him with a meat cutting machine

Bøffen is described as Chubby and normal by Yvonne, Kjeld's wife. He wears a brown thug-hat, a black vest with a striped shirt underneath, and has gray hair. 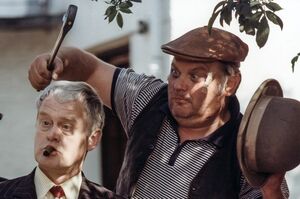 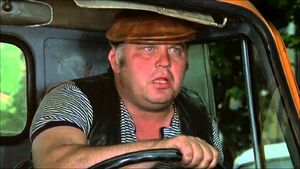 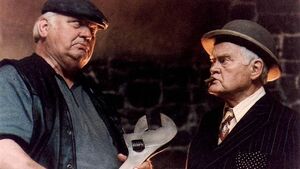 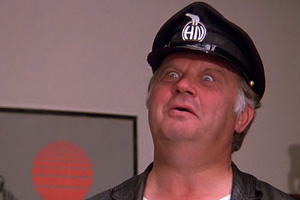 Retrieved from "https://villains.fandom.com/wiki/B%C3%B8ffen?oldid=3526209"
Community content is available under CC-BY-SA unless otherwise noted.