Rape Kelly for as long as he wants (succeeded for a while, then failed).

B.J. is a minor antagonist in The Walking Dead cinematic universe, serving as the main antagonist of the mini-series "Cold Storage".

He was portrayed by Daniel Roebuck, who has also portrayed Samson Tollet in River's Edge.

Little is known about B.J.'s past for certain, but what is known is that for over ten years he owned and managed a self-storage facility, though he apparently did not like any of those he hired to work with him as he was jealous of Lenny due to his relationship with Kelly. One day for no apparent reason, B.J. decided to kill Lenny and two other co-workers, then kidnapped Kelly just before the outbreak of the Walkers.

After a man named Chase is pursued by a group of three walkers into one of B.J.'s storage lockers, he is nearly eaten alive until B.J. kills the three Walkers. B.J. orders Chase to take his weapon and leave, though Chase manages to convince B.J. to let him stay by offering to help fix the generators in the basement in exchange for a car to leave to meet up with his sister, to which B.J. agrees.

B.J. gives Chase a brief tour and tells him he can take some spare clothes from a nearby locker that were previously owned by a police officer. After changing, Chase finds B.J. in his office laughing at a pair of survivors who were eaten alive by Walkers a week prior, unnerving him slightly.

Chase however goes into the basement anyways where he does manage to restore the power, but is nearly killed by a zombified Lenny while B.J. waits upstairs nonchalantly cooking burgers for Chase and himself. Chase questions B.J. on why the three Walkers he killed in the basement all used to work for him and where Kelly is, though B.J. ignores this and just takes Chase outside to dispose of the dead Walkers where he then betrays Chase by attempting to shoot him in the head, though the bullet merely grazes him and knocks him unconscious.

Sometime later, Chase wakes up and reenters the storage facility and steals B.J.'s rifle, then notices B.J. on a security camera leaving one of the lockers while zipping up his pants. Chase investigates and finds Kelly who has been held captive and raped repeatedly since the beginning of the outbreak, so Chase rescues her after giving her a machete to defend herself, though B.J. watches this unfold on the camera himself and confronts Chase and Kelly.

B.J. offers Chase a car to finally let him leave, as long as he allows Kelly to stay with him, and he reminds her that he saved her life on numerous occasions before as she stands between them. Chase pretends to agree to B.J.'s offer and takes a step forward so that B.J. would in turn do the same so that Kelly is now behind him. Chase gives Kelly a knowing look now that she has the opportunity to gain her revenge, and she does so by decapitating B.J. and placing his severed head in front of the security camera. B.J's severed head reanimates and gasps for breath as its forced to watch Chase and Kelly escape, all while being unable to move entirely until he's put down by another survivor or eventually rots away into nothing. 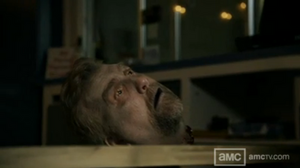