B.W.'s big brother is the main antagonist of a story that D.W. Read tells to the Tibble twins in the Arthur episode "I'd Rather Read It Myself". He is a "big brother mega-transformalizer", a robot with the ability to transform into various shapes. He, along with his partner Bust-trantor, is the one responsible for stealing B.W.'s valuable snowball. He is based on D.W.'s older brother Arthur.

B.W.'s big brother is described by D.W. to be "rotten". He is also smart enough to trick B.W. with a fake snowball, but was shown to cry when he and Bustrantor were trapped inside a birdcage by Spanky the eagle.

B.W.'s big brother first appears in D.W.'s story when D.W.'s narration describes how he was a "big brother mega-transforbalizer" as he appears at B.W.'s bedroom door with a mean grin on his face. He is then shown outside B.W.'s house transforming into various shapes until finally transforming into a can-shaped rocket and flying away. D.W. explains that he had a partner named Bust-trantor (based on Arthur's friend Buster), as Bust-trantor is shown flying next to B.W.'s big brother. D.W.'s narration continues as she explains how B.W.'s big brother and Bust-trantor stole B.W.'s snowball, "the most valuable snowball in the world." B.W. then has her assistant Walter the deer locate her big brother and Bust-trantor's hideout, which turns out to be the treehouse outside B.W.'s house. B.W. tries to take the robots by surprise by using her grappling hook to climb the treehouse, but fails as they notice her and swoop at her. B.W. manages to evade them by doing a series of flic flacs on the balance beam under the treehouse, and then escapes from the robots on her flying bike. She flies over a lake full of octopi; while B.W. successfully evades all their tentacles, her big brother and Bust-trantor are caught by the tentacles and tossed around, allowing B.W. to escape.

That night, B.W. goes to a restaurant with her parents, but finds out that all the customers, including her parents, have transformed into "spinach heads" due to eating spinach and are acting zombie-like. In order to cure the spinach heads, she goes to retrieve the "Power Ring of Power" from her aunt Lucy's wedding, but it cannot be used without her missing magic blankie, so she goes to look for it at a supermarket with her Secret Agent Nadine. B.W. and Nadine get lost in the supermarket, but B.W. eventually finds her snowball inside a freezer at the supermarket, and an arrow appears on it showing the way out of the supermarket. Crazy Bus is parked outside the supermarket, with B.W.'s magic blankie inside. B.W. runs inside Crazy Bus and takes the blankie, but Crazy Bus then transforms, revealing it to actually be her big brother, who holds her in his hand; he had tricked B.W. with a fake snowball. B.W.'s eagle, Spanky, comes to her rescue by pressing a button on her big brother's back, causing him to transform into a birdcage with him and Bust-trantor trapped inside. Unfortunately, Spanky was fatally injured while rescuing his owner, and falls to the ground dead, with B.W. sobbing over his body. Spanky is given a military funeral at the White House by B.W. and her good friend the President, ending D.W.'s story. 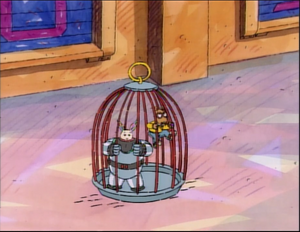