B3 Ultra Batttle Droid was one of the most powerful class droids super battle droids built during the Clone Wars, he was designated by the Confederacy of Independent Systems, he was placed in the fields of battle after five months after the Battle of Geonosis, quickly becoming one of the most formidable and unbeatable droids that the clone army of the Republic who already fought.

The B3 ultra battle droid was based super battle droid B2 model, despite being much larger in size and strength and bulkier than the B2. The B3 had two big arms equipped with a flame thrower and a cannon of large plasma spraying. Two smaller arms, located under the main members, especially deadly rapid-fire blasters. Furthermore, the ultra-droid had a bright missile magazine located to the left of his neck without large head. The B3 also had a projector density to increase its weight, keeping it from falling in combat.

An arsenal of weapons many gave this droid its bite. Two smaller arms wielded retractable cannon blaster rapid-fire forearm. The right arm was equipped with a flamethrower spray tight, while the left sported a large plasma cannon spray. Built in the left shoulder was a rocket launcher that was able to deliver major damage. Another addition to the rockets was that they could track multiple targets at once. His most prominent device was its density projector, able to increase the weight of twenty times the droid. This enabled him to lock into place and made it almost impossible to tip over.

The B3 Ultra Battle Droid was by far the deadliest soldier made ​​by the Trade Federation during the Clone Wars. Fortunately for the army of the Galactic Republic, the super droids suffered from technical problems and were never mass produced. Wat Tambor had done a challenge for both teams, and Metalorn Foundry.

Foundry had developed a droid known as the Avatar-7. This was the droid that received the blessing of General Grievous. He was nicknamed B3 and was sent to be a soldier in the front line. B3 units were used by the Trade Federation of assaults on the frontline against well defended targets. Were often used in place of droidekas, being much cheaper than the destroyer droids.

Jedi Masters Mace Windu and Saesee Tiin faced the Avatar-7 prototype at the Battle of Iktotch. Though their individual skills were not enough to overcome the behemoth, the Jedi worked together to defeat it, eventually destroying it by crushing it under the remains of a Hailfire droid. B3s were also used during the Outer Rim Sieges, where they served as sparse heavy units for each Separatist commander. However, huge price tags and malfunctions with density projectors prevented widespread use.

After the Clone Wars, hundreds of units were used at the Imperial Academy's urban-warfare training zone on the planet of Carida. 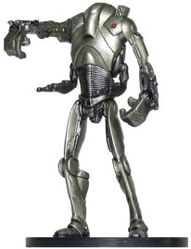 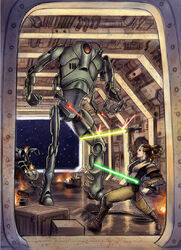 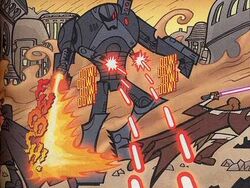 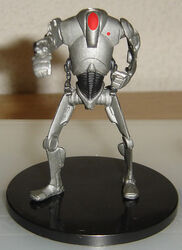 Add a photo to this gallery
Retrieved from "https://villains.fandom.com/wiki/B3_Ultra_Battle_Droid?oldid=3886628"
Community content is available under CC-BY-SA unless otherwise noted.