BB-9E is a droid working for the First Order and an antagonist in the Star Wars franchise, serving as a minor antagonist in Star Wars: Episode VIII - The Last Jedi and as a common antagonist in many marketing programs and shorts based around heroic droid BB-8, who serves as its archenemy.

In The Last Jedi, BB-9E is seen on Supreme Leader Snoke's flagship, the Mega-class Star Dreadnought Supremacy. It is doing surveillance on the ship when it spies Finn, Rose Tico, DJ, and BB-8 disguised as First Order officials. It immediately sees past their disguises and identifies them as intruders, becoming focused and angry. It scans them and confirms ts suspicions, then goes off to gather its superiors.

As the heroes try to break into a part of the ship to disable their tracker, BB-9E confronts them with its superiors, who arrest them while BB-9E looks on. They are later sold out to Captain Phasma by DJ.

Later, the Supremacy is mostly destroyed when Vice Admiral Holdo flies the Resistance ship Raddus into it at light speed. It's unclear if BB-9E was destroyed in the process or if it survived the crash.

In this animated series of short films, BB-9E appears as the main antagonist in the episode "Hey You", where it is confronted by BB-8. Though it wants nothing to do with the other droid, it finally snaps when BB-8 antagonizes it too far, chasing it around and trying to catch it, but crashes into a wall and has its top piece fall off. BB-8 replaces it and runs, and BB-9E wakes up and begins furiously searching the ship for BB-8.

Despite his minimal screen time in the actual film, BB-9E served as a major antagonist in much of The Last Jedi 's marketing, usually going up against BB-8.

BB-9E was featured as one of the "App-Enabled Droids" app AR game by Sphero. In its commercial, it is shown giving a tour of the Supremacy.

Though it has a simple role as a First Order droid, BB-9E is programmed with a cold, sinister and treacherous personality. It hates the Resistance and desires to snuff them out (a trait shared by the rest of the First Order), but is mainly confined to simple surveillance and only gets its time to shine when intruders do come, and he also shows a sadistic and cruel demeanor when exposing its foes. 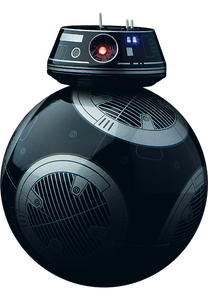 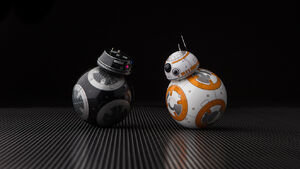 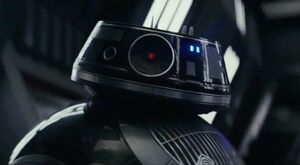 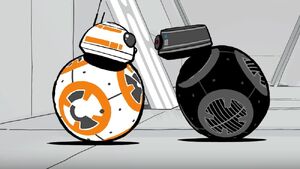 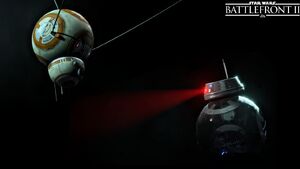 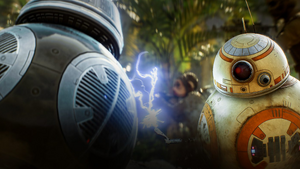 BB-9E and BB-8 facing each other in Star Wars Battlefront II. 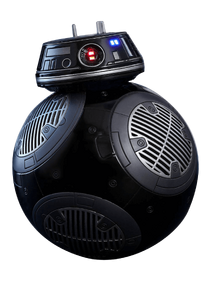 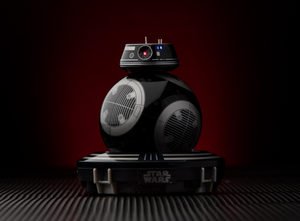 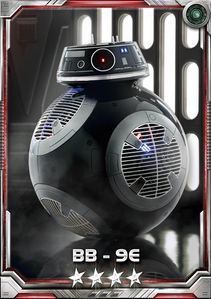 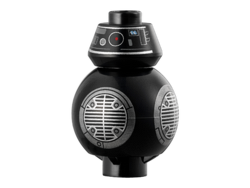 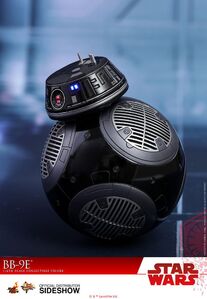 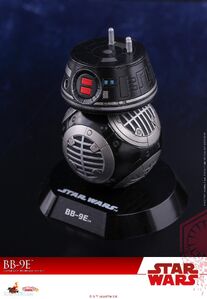 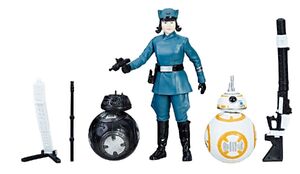 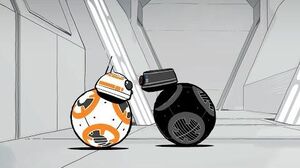 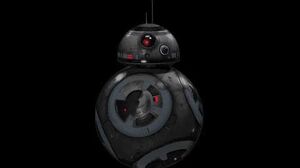 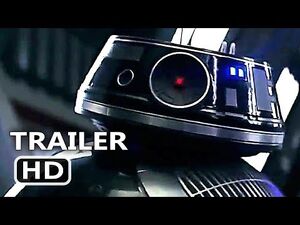 Retrieved from "https://villains.fandom.com/wiki/BB-9E?oldid=4205217"
Community content is available under CC-BY-SA unless otherwise noted.