Brutal Obscene Beast, better known by the acronym BOB, is the main antagonist of the Creepypasta stories BOB and Another Perspective On BOB. It is a monster that stalks and eventually kills its victims before eating them.

At the beginning of BOB, BOB breaks into the house of a kid named Andrew, who it has apparently been stalking for some time, by smashing through the patio doors. Hearing it walking over the broken glass, Andrew grabs a titanium baseball bat and heads downstairs to attack BOB, but is too scared to move as it gets closer. Eventually, he hits it in the chest with the bat, but it kicks him down and stamps on his leg, breaking his shin. Unable to escape, Andrew is forced to watch as BOB presses its clawed foot down onto his stomach, slowly ripping through his flesh and killing him. BOB then leans over and bites off Andrew's face, before tearing and eviscerating his corpse. After devouring his remains, BOB departs through the broken patio door, with "a pure and deep hatred in its heart".

Another Perspective On BOB

While the protagonist is searching for ghosts in his uncle's graveyard at midnight, he sees a "humanoid, grey-coloured thing" standing nearby. Assuming it's a stoner or another ghost hunter, he shines a torch at it, but runs away in fear when he realises something: it has no arms. Several minutes later, the protagonist hears his dog barking and runs outside to investigate, only to see the creature standing there staring at it. He screams at the creature, distracting it and resulting in a standoff between the two. Then, BOB urinates on the dog, prompting him to go and get a knife and chase it away. The dog contracts pneumonia that night, likely because of being urinated on by Bob. After the dog is saved by a vet, the protagonist is driving home, and sees BOB standing in the middle of the road. He drives straight at it to run it down, but it leaps over the car and escapes into the woods. The protagonist is traumatised by his experiences, and stays awake all night worrying that BOB will return if he goes to sleep. The story ends here, but BOB most likely killed and devoured him like it did to Andrew, though it is unknown if that actually happened. 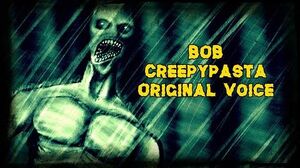