One of the Great Evils

Tor'Baalos, better known as Baal is one of the Prime Evils who rule the Burning Hells in the Diablo Universe - he is known as the Lord of Destruction.

Baal, like his brothers Mephisto and Diablo, was banished to the mortal world during the events of the Dark Exile, which was what they wanted all along immediately after receiving information from Izual regarding the Worldstone and Soulstone. He and his brothers were hunted down by the Horadrim magi, at the advice of the Archangel Tyrael. They tried to use the Soulstones to imprison them, but Baal's soulstone broke during his resistance and one of the Horadrim magi who held the Soulstone proved too reckless to prevent it breaking.

The mage Tal Rasha then volunteered himself to contain Baal within his own body, being chained and buried in a tomb under the deserts of the East, where his Soul was to struggle with Baal for eternity. Despite the mage's resolve, Baal managed to take control of Tal Rasha's body, though his plan did not work as well as his brothers', as the chamber where he was confined in chains was charmed by powerful runes that prevent his escape, which could only be deactivated by pulling the Soulstone shard from his host's chest.

Diablo, under the guise of the Dark Wanderer, found the tomb, along with Marius, who was following him. As he was about to free Baal, Tyrael interfered, and they began fighting each other. So Baal tricked Marius into pulling the shard from his chest as Tyrael was distracted, and was freed. After this, they lock Tyrael in the tomb, leaving Duriel to protect it, as they go to the city of Kurast to free their brother Mephisto.

Marius, with Baal's Soulstone, is forced by Tyrael to go after them and enter the gate to Hell, in order to destroy the stone. But, as he sees the three demons reunited, he flees and locks himself in an asylum. Later on, Baal goes after Marius, disguised with a hood. Marius, thinking it was Tyrael, tells him all of his tale, to which Baal listens patiently. He asks Marius to give him the Soulstone, and reveals himself when he gets it, killing Marius and burning down the whole place.

Resuming his and his brother's plan to corrupt Sanctuary, Baal moves to the frigid lands of Mount Arreat, where he was intent on finding the Worldstone, a large stone that kept the balance of the mortal world. He builds up his army and marches against the barbarian lands of Harrogath. The elders of Harrogath sacrifice themselves to make a protective barrier around the city.

Baal then strikes a deal with Nihlathak, who gives Baal the Relic of the Ancients, an amulet that grants entrance into the Worldstone Chamber, in exchange for Baal sparing Harrogath. Baal enters the place, where he is challenged by the adventurers who defeated his brothers. Baal is defeated, but he left the Worldstone corrupted by his evil essence, forcing Tyrael to destroy it.

Baal was later captured, and ended up inside the Black Soulstone. He was eventually merged into Diablo along with the six other evils as a singular Prime Evil.

Baal is considered the most reckless and brash of the Prime Evil's. True to his title, he reveled in utter annihilation, not only of the world around him, but of those who dwelt in it. On the surface, he appeared to be the most base and easiest to comprehend of the Prime Evils, and many have claimed as such. Being the Lord of Destruction, he enjoys destruction as a mere hobby, which is why during his reign in hell, Baal had his servant build a number of structures to destroy.

Contrary to such statements however, Deckard Cain stated that Baal was just as cunning and nefarious as his siblings; quite capable of using strategy and deception to further his goals. This was proved in Baal's interaction with Marius: In spite of him had the chance to ravage entire asylum for retrieving his Soulstone from Marius' hands straight away, Baal instead posed as visitor who calmly visit Marius' chamber and take his time to listened to his story before convinced him to give him his Soulstone. Once the man gave him the Soulstone, Baal used the opportunity to revealed his true color, killed Marius and set the whole asylum ablaze.

Baal's followers are also destructive like their master, as they prefer to surround their enemies and attack from all sides simultaneously, and are bred for strength and agility. They seek the undoing of Creation, striving for disorder and destruction. To Baal's minions, Order is anathema, and his lieutenants are bred for strength, endurance, and cunning, constantly training themselves in the art of war. Many of Baal's Demons are intangible on the mortal plane.

Like his brothers, Baal, by his nature, is confrontational. 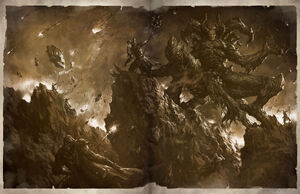 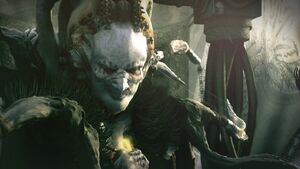 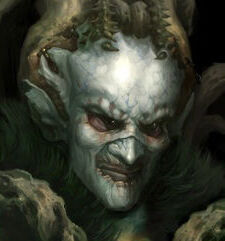 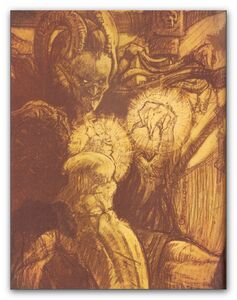 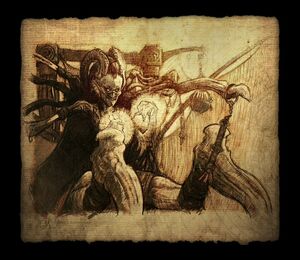 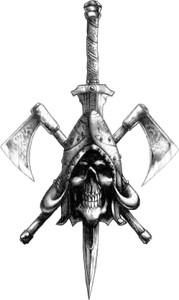 Retrieved from "https://villains.fandom.com/wiki/Baal_(Diablo)?oldid=4064590"
Community content is available under CC-BY-SA unless otherwise noted.