Destroy the Necronomicon Ex-Mortis to avoid being banished to hell again.

Take over the world with his own army of demons.
Kill Ash Williams and his allies (all failed).

Baal, also known as "The Enemy", is the main antagonist of the second season of the Ash vs Evil Dead TV series.

A powerful and older demon, malevolent and charming, he became the Big Bad of the series when he was brought back to the world of the living by the Necronomicon Ex-Mortis (better known as the "Book of the Dead"). Knowing full well that the book is the only thing capable of returning him to hell, Baal starts a hunt to destroy the book and bring forth his own army of evil demons to take over the world, and will kill anyone or anything that would hinder his goals, especially his one-time flame turned sworn enemy who have mated with him had demonic children in the distant past, and her name was Ruby, the false human who is actually both the Necronomicon's original author/creator and one of the dreaded Dark Ones.

He was portrayed by Joel Tobeck.

Baal is intelligent and cunning, and although a demon with immense supernatural abilities he primarily uses disguises and his manipulation of perception to turn his enemies against each other. Baal is arrogant and tends to look down on humanity as puny beings, as such he has no intention of keeping his promise to humans whom he makes bargains with. This was apparent with Thomas Emery whom he betrayed and went back on the deal and Ash, who he promised not to use his powers in a duel but cheated and used his magics anyway.

Baal initially desired to outright destroy the world along with humanity rather than rule or possess it, suggesting he has a far more destructive personality than the Kandarian Demon (or Ruby) which only seeks to possess all humans of the world. But Baal later alters his goal of annihilating humanity to wanting humans to bow down to evil so the evil can rule over them, contradicting his previous destructive view. Whether he changed his mind due to Ash, who in spite of being a human keeps exceeding Baal's expectations is unknown.

The demon Baal returns to the human world via summoning when Pablo, one of Ash Williams' two friends, is fused with the Necronomicon Ex-Mortis and accidentally crafted a spell that frees him from the dark realm of hell, Baal arrives at a ruined market, when a police officer arrives to investigate strange activities, Baal ambushed her. The cop tries to shoot him, but Baal uses his mental powers to seduce her and start making love with her. Unknowingly by the cop, Baal makes one of his fingers a big claw which he uses to dissect the poor woman, then, he covered himself with the victim's skin and takes her identity. Intrigued with Ash Williams, he decides to test the chain-saw wielding hero to see if he is the "El Jefe".

After finding out that Ash Williams has been put in jail (since many people believe he is the one behind all the town's chaos and murders), he decides to go there, thinking Ash may know where the Necronomicon is, using his fake identity to gain access to the prison and traps Ash and his friends inside, breaking the phones and any communicate system, along with the electricity. As Ruby began temporally working together with Ash points out, Baal is using everybody else's issues and confusing them to make them fight and destroy each other, Ruby goes down to check the prison's vault and get weapons, a cop finds her and starts seducing her, that way Ruby finds out that she is actually Baal in disguise, Baal takes off the bloody skin and explains her his plans about destroying the Necronomicon and take over Earth for himself with a legion of supernatural fiends by his side before knocking her off. He then turns his previous victim's body into Meat Puppet, creatures far more feral and destructive than Deadites, who attacks the heroes before kidnapping Linda Bates Emery, Ash's high school accomplice (not to be confused with the deceased ex-girlfriend of Ash). He takes Linda to another zone in the prison and lets her to be killed by his pawn, but she is saved by Ash.

Baal persuades sheriff Thomas Emery, who was on the verge of being unhinged due to stresses caused by fights between evils and Ash brought (Thomas and Ash's relation was adverse since high school years), to join him in killing Ash, and instigates the angry lynching mobs to his advantage. Baal once again kills and disguises himself as one of the townsfolk and leads the mob to Ash's old home where they start throwing objects and even shooting at the house where Kelly and Linda were forced to defend themselves while Ash was engaging deadite Cheryl who was brought back after 30 years. Ash ultimately kills deadite Cheryl Williams (and this time directly), in front of the townfolk, finally convincing them of his innocence. But Ash's victory is short-lived as Baal subdues him.

Baal later poses as "Doctor Peacock", a psychiatrist at a dilapidated mental hospital and attempts to twist and break Ash's mind into believing he was deluded. Baal tells Ash that in order to start recovering from his mental breakdown, Ash would have to destroy the source of his delusion; the Necronomicon, Baal's only known weakness. But the catch is that a piece of Necronomicon was merged with Pablo Simon Bolivar, one of Ash's accomplice. After believing he killed two innocent people and a visit from Linda, Ash seemingly falls for Baal's deception and accepted his delusion. Baal releases Ash from his restraints and tells Ash to destroy the book, namely Pablo.

Ash hunts Pablo down, and traps both Pablo and Ruby in a closet. Pablo leaves only to be dragged off by Ash and chained up. Baal appears and tells Ash to kill him... Only for Ash to free Pablo and reveal that it was Baal who was being manipulated by Ash as Ash needed Baal and Pablo to be in the same room for the banishment ritual to begin. Ash and others (Kelly, Linda, Ruby, Pablo) fight, restrain Baal and manage to restrain him long enough for Pablo, using Necronomicon banishment spell, to banish the wicked demon. While Baal was seemingly vanquished, in the ensuing struggle Baal, using his razor claw on Pablo to bisect and kill the young shaman.

Baal was neither dead nor vanquished however, he was merely hiding within Pablo's corpse. Ash, to resurrect Pablo, goes back in time (against Ruby's warnings and Baal, using Pablo's corpse and illusion, manipulates Ash into time travel). In the past time line in which everything began, Baal reemerges from Pablo's corpse, shocking Ash before the 80's version of Ruby, obviously still in league with Baal, kills present Ruby, captures Kelly, Ash and brings the duo to the cabin. Just when everything seems lost, Ash challenges Baal to a duel with the condition that if Ash wins, he gets Pablo back and Baal, Ruby and his 'children' goes to hell; if Baal wins, fate of the entire humanity including Ash and Kelly are Baal's to determine. Ash, surprisingly, demonstrates superior hand-to-hand and fighting skills, forcing Baal to use his demonic powers to cheat. Baal uses his illusions to try and trick, but they all fail, instead he and Ash end up in a chainsaw brawl, both wielding the same chainsaw but from different timelines. Ash is eventually defeated and Baal claims victory. Ash asks for final words which triumphant Baal allows, but Baal gets distracted long enough by Ash's "final words" for Ash to use Baal's own claw against him, defeating and truly sending the traitorous demon back to hell. 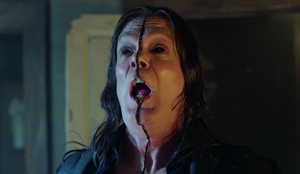 Baal defeated by his own claw. 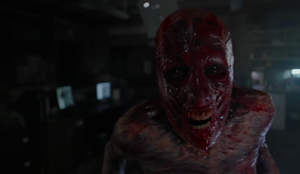