Take revenge on Hellboy for shooting her eye.

Baba Yaga is a supporting antagonist of the 2019 American supernatural superhero film Hellboy and is based on the same name from the Hellboy comics.

Baba Yaga voiced by Emma Tate, but she was portrayed by contortionist Troy James, who also portrayed Rag Doll in The Flash.

Baba Yaga is a powerful witch from the Russian folklore, according to the legends of her, she flies in a mortar wielding a pestle and lives in a shack that looks small on the outside but it's actually bigger on the inside, it is said that the shack has its own personality and moves around in two giant chicken legs transporting Baba Yaga. She kidnaps, kills, cooks and eats children as her favorite meal to satisfy her never-ending hunger.

In Hellboy, she wants revenge on the titular hero for shooting her eye out and banishing her to another dimension when she tried to revive Russian dictator Joseph Stalin. She also informs Gruagach, an old enemy of Hellboy, about the whereabouts of the chests that contain severed parts of Nimue, the Blood Queen so Gruagach and herself can take revenge on Hellboy with her help.

In Hellboy she's first seen talking to Gruagach about the coffins where King Arthur hid the various severed body parts of Nimue, The Blood Queen, cut by himself using Excalibur, the legendary sword. Baba Yaga tells Gruagach that if she frees Nimue, she'll help him get revenge on Hellboy for a previous encounter, with this Baba Yaga plans on bringin Hellboy to her so she can also take revenge on him for shooting her eye out and trapping him in another dimension.

Gruagach manages to get all the coffins and once Nimue is made whole again, she tries to seduce Hellboy to her side and make him his king so they can liberate all the supernatural beings from men. After Hellboy has an argument with with his adoptive father, Dr. Bloom in the A.I.D.P headquarters in London, Hellboy tries to leave through a lift but when going up, the lift instead goes down and keeps going down as a confused Hellboy it's thrown against the ceiling. When the lift stops, Hellboy discovers he has been transported to the dimension were she trapped Baba Yaga after foiling her plan of reviving Stalin.

Baba Yaga presents her house to Hellboy welcoming him as the door opens, inside, Baba appears from her mortar twisting her body and falling to the ground like a rag doll, once standing, she invites Hellboy to her dinner table. Hellboy then discovers Baba Yaga has managed to find children for her to eat as that is what she served to Hellboy as he finds out the dead children in the backroom, Hellboy refuses to eat and demands Baba to tell him why she summoned him there, Baba then tells Hellboy she can tell her where Nimue is if he agrees to make a deal with her for Hellboy's eye so she can replace the one he shot. Hellboy's insecure at first but finally accepts, Baba seals the deal with a gross kiss with Hellboy and then tells him Nimue is planning on going to Pendle Hill to restore her blood and full power.

When Baba is about to take Hellboy's eye with a sickle, he stops her and tells her she will have his eye when he is done using it as they never agreed a time lapse, Enraged by this, Baba attacks Hellboy with two sickles and after a brief fight, Hellboy subdues the witch and before he can take the final blow, Baba makes the house lean, throwing Hellboy from where he entered. As he falls, Baba curses Hellboy that she will get his eye eventually or he will have to use it to see everyone he loves die in suffering. Hellboy returns to his dimension to continue with his mission.

It is unknown what happened to Baba Yaga after this, or if she is planned to return in a possible sequel.

This portrayal of Baba Yaga resembles a lot with the original portrait of her in the folk tales, depicting her as an extremely old and thin woman, as well as extremely ugly, however the tales also depict her as having iron teeth, stone breasts and a bone leg, in the movie it is unknown if she has iron teeth or stone breasts, but it is shown to have two wooden legs instead of normal legs.

She is also very flexible to the point of appear as if she had no articulations at all. She's constantly seen talking with a deformed and unnerving grin.

Thanks to Hellboy, she's missing her right eye. She also walks using a stick even though she's shown to be able to move and fight perfectly, it is also mentioned by Hellboy that her tongue has hair on it. 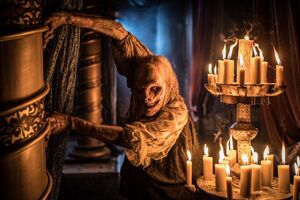 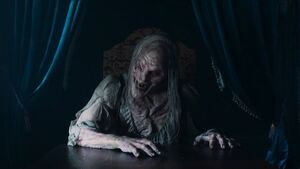 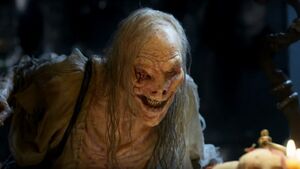 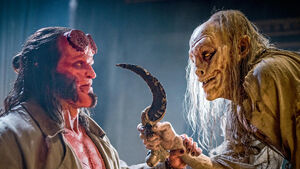 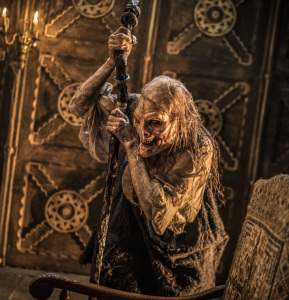 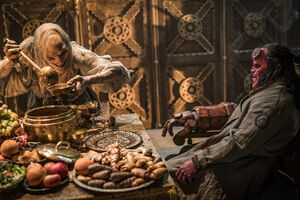 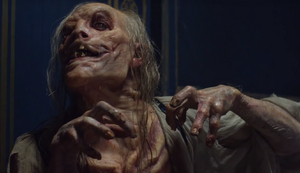 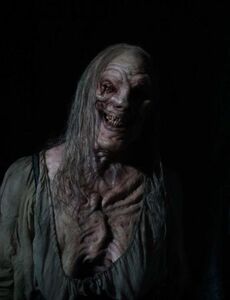 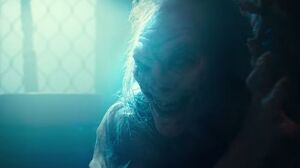