Obey the mandates of his master and lord, routing their hunger for destruction.

Free from the control of Quetzalcoatl with Team Legend's help (all abandoned).
Take the Celestial Point to destroy La Esfera and absorb its power with which to eradicate humanity and that the witches have control (failed).

Baba Yaga is one of the two secondary antagonists (alongside Nu Gui) of the Netflix 2017 animated series Legend Quest. She is a Slavic witch who despite being a servant of Quetzalcoatl, is the the most consistently appearing antagonistic force on the show, as well as the one who caused the most bad things to happen to the team.

She's only working for Quetzalcoatl because he's trapped her under his influence, can use her powers to disguise herself, but cannot remove the shackle that binds her to Quetzalcoatl. She also claims to be above "mortal morality", caring only for the fate of witches.

She is voiced by Erica Edwards in Spanish and Blanca Bassion in English.

Baba Yaga is very cruel and manipulative, she is seen many times throughout the series to manipulate others and even the team, often times under a disguise of sorts.

Baba Yaga has the face of an elderly woman, yet the physique of a rather young lady. Her hair is long, whitish-blonde and heavily braided up. Her skin is of an icy blue complexion. Baba Yaga wears traditional Nordic clothing.

Dedicating her life to witchcraft, she would go from being a simple human to an immortal being with enough knowledge and powers of dark magic. The years went by and Baba Yaga would visit other remote places where she would be both feared and respected by other kingdoms, and even countries that no longer exist (taking various treasures and relics on her long journeys). In one of his trips, he would meet the princess of china who murdered her father to achieve the immortality of a flower: becoming partners and instructing her in the black arts, forming covens with other witches.

Over the years, witches around the world were oppressed by humans, fearing their practices that they considered pagan, that is why Baba Yaga wanted to make an alliance with Nu Gui to end this injustice. The two witches, in order to succumb human society, would have to awaken all Terracotta Warriors and form an indestructible army, then they required the help of a "third witch" to complete the ritual. In the course, Baba Yaga would meet a sorceress who resided in a town in Mexico, forging a relationship of empathy by sharing her desolation of not being able to live in peace with other people.

When it was time when Baba Yaga revealed to this woman his union with Nu Gui he had told her that they needed his help, to awaken the bellicose statues and erase the humans from the planet. Of course, this woman would not agree with what they proposed to her as she is someone who prefers to live fully with her daughter, so Baba Yaga and Nu Gui did not take it very well so they vowed to retaliate against her. One silent night, far from the town, Baba Yaga and Nu Gui paid a visit to the sorceress, who was actually Marcela's mother, to rectify her rejection of the plan and choose to collaborate with them. She reiterated her reply, and said that she would not, asking them to leave their property. This causing the witches to attack her and start a fight with each other, leaving the sorceress badly injured and in a state of bodily paralysis.

At some point the mesoamerican god Quetzalcoatl captured Baba Yaga during his stay in mexico, forcing her to be his servant to help him prevent "the lion" going through the sphere and destroying it as in the prophecy. Refraining from not obeying, the snake god places a bracelet on the witch's hand to prevent her from betraying him and to be able to spread his message of convincing different mythological creatures to join his army, also capturing the chosen one of the prophecy.

Baba Yaga makes her first  debut as a clergyman secretly working under Quetzalcoatl. At the end of Episode 2, It's revealed that Jacob, the townsperson of Leeds, was locked in a closet and replaced by the witch weeks before Leo and co's arrival.

In Episode 4, Aldo turns out to have done this. After Leo and Teodora have their argument and Leo's looking for her, Aldo tells Leo that Teodora went to Medusa's cave to try and defeat Medusa herself, but when Leo catches up with Teodora, she claims that Aldo told her that Leo went up on his own first. The end of the episode reveals that Aldo the Shepherd turns out to be the imposter from New Jersey.

In Episode 5, within the first part of the episode, the team is able to sneak up on and capture Baba Yaga, the witch who has been messing with them over the past few episodes. The fact that they had a plan to do so, or even knew about her existence, isn't revealed until she's captured. Baba Yaga takes advantage of the heroes celebrating their victory by commanding her house to run away, with her in it, after they leave to rest in the town.

In Episode 8, after Alebrije's sacrificed himself two episodes prior, Baba Yaga found him and turned him into the titular Kaiju, then sent him to destroy Japan, and Akihito's spirit. While that plan ultimately fails and although Alebrije is returned to normal, Baba is still able to get what she wanted from Japan, the Celestial Point.

In Episode 9, in a bid to strengthen their coven, Baba Yaga and the immortal Nu Gui summoned Marcella to a cave in China that's crawling with terra-cotta soldiers. It is there that Marcella's true heritage is revealed, calling into question Leo's crush on her and the friendship Teodora found herself forming with her. Marcella turns out to be a witch, involuntarily betrays the team, gets killed off briefly as a sacrifice, and is revived by Teodora, who mind melds with her to reveal how Marcella inherited her powers, while also flashing back to her corporeal body which turns out to be in a coma in the 21st century. Towards the end, Baba Yaga and Nu Gui get into a fight that destroys the cave they are in and Teodora is sure that neither survived. She is proven wrong in the final shot, when Baba's hand bursts out of the rubble.

In Episode 11, when Baba Yaga tags along with Leo and company to raid the Chilan's temple for the Esfera, she claims that she'll be just as helpless as they thanks to the temple's power rendering her magic useless. Instead of being reduced to a feeble old hag, however, she proves to be a strong, athletic, and powerful fighter, allowing her to readily survive the ordeal. Baba Yaga proposes in order to get the Esfera and free herself from Quetzalcoatl's servitude. Ultimately she manages to take down the Chilan and then breaks the enemy mine to take the Esfera for herself.

It was implied that the remaining members of Team Legend decide to punish Baba Yaga for betraying them, killing Teodora, and trying to kill her comatose body in the 21st Century by leaving her. then she was left at the mercy of Fenrir, repaying the debt they had to the beast in the process.

Baba Yaga does not appear or is mentioned at any time in Legend Quest: Masters of Myth, and despite his null participation she is a posthumous character throughout the second season. In episode 7, when Leo and his friends went to a cavern in Canada they met Fenrir again, and so far, it is unknown whether he would have eaten Baba Yaga or escaped from him. Her actions continue to be referred to when it was shown that she had left Marcela's mother invalid after a confrontation they had, being part of an illusion of Anansi in Episode 10. 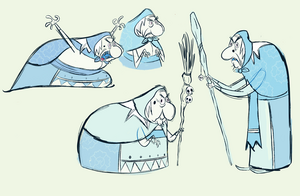 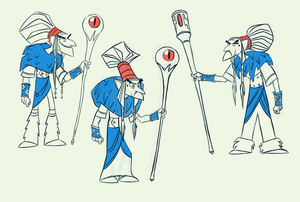 Baba Yaga's desings intended to change some phases in the development. 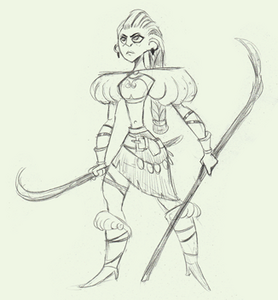 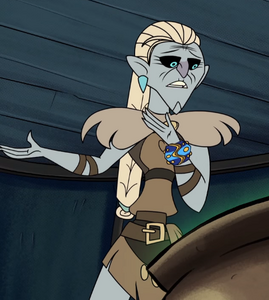 Baba Yaga comunicating with Quetzalcoatl in the cauldron. 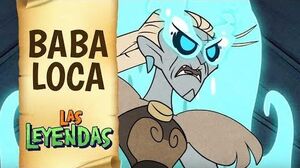