Leader of his Majins

Use Majin Buu to dominate Earth among other planets.

Babidi is the secondary antagonist of the Majin Buu Saga of Dragon Ball Z.

He is an alien wizard and the son of the wizard Bibidi, who awakened Majin Buu. He has the power to control anyone who has even a trace of evil inside them. His henchmen include Dabura, Pui Pui, Yakon, Yamu, Spopovich, several unnamed soldiers, and Vegeta (briefly). His actions resulted in trillions of deaths across the universe.

In Japanese, he was voiced by the late Joji Yanami and (currently) Bin Shimada. In English, he has been voiced by Terry Klassen, Duncan Brannan, and Bill Townsley across various appearances.

Babidi is the son of the powerful wizard Bibidi. Supposedly whenever Bibidi needed assistance he would split into multiple people and split his magical power between them, Babidi was one such doppelganger, and when Bibidi was killed, Babidi remained and inherited all of his original self's power. He swore revenge on Shin for murdering his father as he saw him as a reflection of himself.

He is first seen in Dragon Ball when he travels to Earth with his minions in order to gather enough energy to revive his father's monstrous creation, Majin Buu. Babidi sends two fighters under his spell, Yamu and Spopovich, to the 25th World Martial Arts Tournament to steal energy for Majin Buu from the other contestants. Upon receiving the energy, Babidi no longer sees anymore use for these two minions, and so he decides to murder Yamu and Spopovich, starting with Spopovich who he blows up.

He condones another minion Pui Pui to shoot Yamu as he flees in terror, as Babidi with gleeful sadism tortures Spopovich to death by slowly expanding his inner energies, causing him to painfully swell like a balloon until he explodes. This sickening behavior defines Babidi's character: a sadistic and insecure man who compensates his shortcomings (being unattractive, weak, and little) by torturing and abusing beings stronger, yet more helpless than him. He later regrets doing this action hastily when he realizes that the energy supplied to him by Yamu and Spopovich (coming from Super Saiyan 2 Gohan) filled only half of the necessary power to bring Majin Buu back to his full potential, and with this energy Babidi was half way to the point where Majin Buu would be released from his Sealed Ball.

He sent Pui Pui to Level 1 to fight them, but Vegeta easily killed him. He then took "extreme measures" and sent Yakon to Level 2, but Son Goku easily defeated him, and he was killed when he ate too much of Goku's light energy. Dabura fought Gohan, but returned to Babidi to tell him that Vegeta could be turned evil again. So Babidi turned Vegeta evil, transforming him into Majin Vegeta, who fought Goku.

The damage inflicted to Goku caused Majin Buu to awaken just as Gohan and Kaioshin were about to fight Babidi and Dabura. When Buu awakened, Babidi made clear to Buu that he was his master and could seal him up again if he disobeyed him. After Buu used his powers to push Gohan out of the way and Kaioshin manages to save Gohan by destroying the blast and hiding his body in a forest, Babidi believes that Gohan is dead and congratulates Buu for killing Gohan.

Vegeta turned on Babidi and destroyed his spaceship after Vegeta has sensed that Gohan is dead and Buu ate Dabura after turning him into a cookie with his change beam (while being cheered on by Babidi). In the end, Piccolo confronted Babidi and chopped him in two, cutting his arm off (not unlike Frieza during his fight with Goku). While a remorseful Majin Vegeta confronts Majin Buu, Babidi is encountered by the restored Piccolo (who, along with Kuririn, was reversed from his stony restraints after Dabura was slain), who swears to kill him.

Babidi and Piccolo then have a short fight; Babidi uses magic against Piccolo, such as covering him in electrified slime and surrounding himself in a barrier, but neither work. As Piccolo begins to penetrate the barrier, Babidi pleads for his life, stating that, without him, Majin Buu would be completely uncontrollable and kill everything in sight. Piccolo merely shouts, "That's not gonna happen even if you are alive, so it doesn't matter anymore!", and shatters the barrier, slicing Babidi horizontally in half.

As the dismembered Babidi falls to the ground, he laments on his predicament as he had planned on living on to rule the universe.  Barely alive, Babidi watches the fight between Majin Vegeta and Buu, in which Vegeta uses the Final Explosion technique to detonate both himself and Majin Buu. This attack proves to be in vain, and Buu recovers. Reluctantly, Buu goes on to revitalize Babidi (who with the aid of his barrier managed to escape death closely), after being blackmailed with being resealed in the Magical Ball.

Jumping on Buu's back, Babidi then begins his global rampage, as he is unable to leave Earth due to Majin Vegeta having destroyed his spaceship. As it is soon revealed, Buu is barely controllable, and Babidi only manages to keep him under control with the threat of sealing him again.

After using Majin Buu to wage genocide on numerous cities, Babidi telepathically communicates with the Earth's population, demanding that Son Goten, Trunks and Piccolo show themselves to the wizard, and then proceeds to force Buu to kill other innocents in the hopes that he would lure them out. Eventually, Idasa tells his mother where Trunks lives, and she tells Babidi; however, her obnoxious behavior is highly annoying for Babidi, who threatens to kill her afterwards. Aiming to destroy West City, Babidi and Majin Buu are confronted by Goku, who has come to stall them so that Trunks can retrieve the Dragon Radar in time.

Babidi watches Super Saiyan 3 Goku and Buu fight evenly until Goku powers down and leaves, telling them that a new, more potent fighter will be appearing in two days to fight against Buu, and not "a cowardly worm like Babidi." Goku even scolds Buu for allowing himself, such a great fighter, to be ridiculously bossed about by Babidi. Babidi then proceeds to flip the bird at Goku in response as he leaves. Little did he know that Buu was well aware of how pathetic he truly was, and was possibly using him.

After Goku leaves, Babidi scolds Majin Buu for not killing Goku and begins

to viciously insult him. This, coupled with Goku's words sinking in, finally pushes Buu over the edge and unable to tolerate Babidi's bullying any longer. So Buu tells the wizard that he has a secret to tell him so Babidi leans over and tells Buu to spit it out, so they can do something. However, he is grabbed by the throat and strangled, thus preventing him from reciting the incantation to reseal the monster. Buu then shatters his head with a single punch, proceeding to vaporize the headless corpse with a barrage of Ki blasts and Buu is finally free from Babidi's orders.

After his death, he appeared in anime filler, alongside other villains in Hell watching the fight between Goku and Kid Buu. He was cheering for Goku to win, as he wanted Buu dead for killing him. Even when Kid Buu was destroyed, Babidi remained unaware that the Buu who killed him was a separate Buu and survived. In Hell, he hides this from the villains, and takes credit for training Buu once again showing the extent of how petty he is as he roots for Goku out of spite towards Buu for killing. 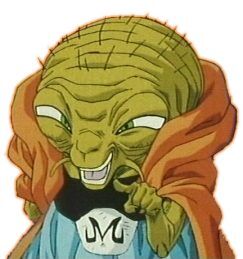 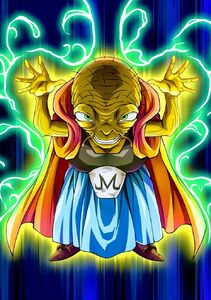 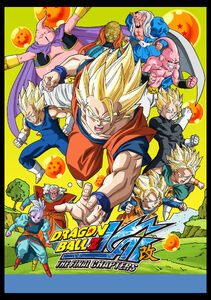