Baby is one of the two playable characters in the 2015 dark comedy video game Who's Your Daddy?. It is a baby that attempts to use various objects and methods found around the house to kill itself before Mom returns. This may be interpreted as childlike innocence, but most see it as the baby trying to make its father look bad and possibly get him in serious trouble.

In an alternate mode called Daddy's Nightmare, the babies (as there are more than one player) attempt to kill the Daddy before he gets a generator powered up and/or before Mom gets home.

The game begins with up to four Daddies and/or up to four Babies playing. The baby's goal is to kill itself within the time limit (four minutes), while the Daddy tries to prevent the child's death.

A baby's methods of dying are:

A baby can use the air vents to travel to each room quickly, as well as use the ball blaster or water gun to attack the Daddy and slow him down. However, the Daddy can also block off the baby's access to the aforementioned hazards, slow the baby down with the ball blaster and water gun, and temporarily immobilize the baby using the Baby Disably or Baby Restrainy.

If the baby succeeds in getting its health all the way to zero, it wins. If not, the Daddy wins.

In the Daddy's Nightmare mode, up to three babies are pitted against one Daddy. Their goal is to kill him before he gets the generator working and/or before Mom gets home. The babies can punch, stab, fire the ball blaster, and use poison grenades to try to get the Daddy's health to zero.

This mode takes place at night with all the lights out. The Daddy has a flashlight, but risks being seen by babies if it is used.

In this mode, all players are babies and attempt to use the items around the house to kill each other. These items include the regular items and add poison grenades, hammers, bear traps, handcuffs, and boosts such as speed, jump, stamina, and health.

The baby appears as a small infant with pink skin and large lips. It has wide round eyes and a small nose. It wears a white diaper. When there are more than one baby in the game, they will be accessorized with top hats, sunglasses, baseball caps, ski hats, and the like. The baby's gender is unknown. 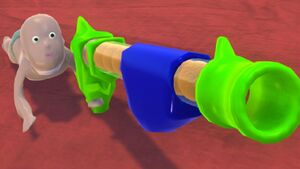 The baby armed with the Ball Blaster. 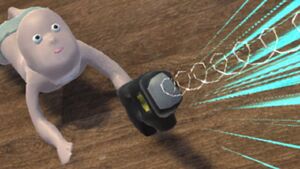 The baby armed with the Baby Disably. 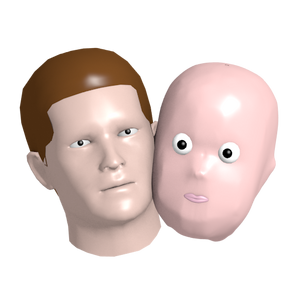 The Daddy with the Baby. 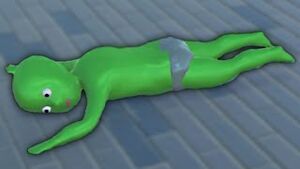 The baby dying of poisoning. 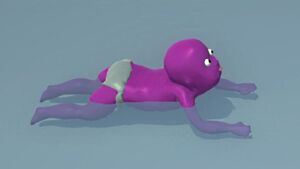 The baby drowning.
Add a photo to this gallery 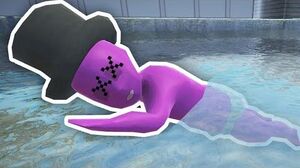 BABY DROWNS IN POOL!! Who's Your Daddy?!
Gameplay by TheDiamondMinecart 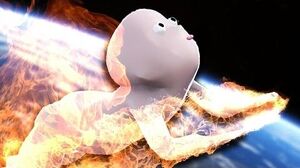 ROCKET BABY!! Who's Your Daddy w Pewdiepie, JackSepticEye, and CinnamonToastKen! 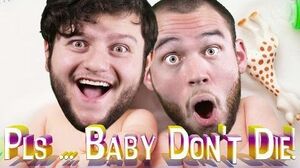 BECOMING A PROFESSIONAL PARENT Who's Your Daddy! (Funny Moments)
Gameplay by SkyVSGaming and ThatGuyBarney
Add a photo to this gallery

Retrieved from "https://villains.fandom.com/wiki/Baby_(Who%27s_Your_Daddy%3F)?oldid=3533193"
Community content is available under CC-BY-SA unless otherwise noted.