Villains Wiki
Register
Don't have an account?
Sign In
Advertisement
in: One Piece Villains, Female, Manga Villains,
and 25 more

Baby 5 is a minor antagonist of the Dressrosa Arc in One Piece. She was a servant, and later become an assassin of the Donquixote Pirates and an executive of the crew's Pica Army. Later she will be engaged with Sai at the climax of the same arc and, becoming the Straw Hat Pirates ally, and also becoming a part of the Straw Hat Grand Fleet.

She was voiced by Rina Satō (who also voiced Dahlia Hawthorne in the Ace Attorney anime series) in Japanese and Katelyn Barr (who also voiced Ren Sohma in Fruits Basket, and Kyouno Natsumi in Date A Live) in English.

Baby 5 is a woman of average size. She has a slim, well-endowed, curvaceous figure. She wears a skimpy, velvet French maid outfit that reveals much of her legs, with her bra partly visible. She has been seen smoking a cigarette on multiple occasions. She also carries heavy weapons on her back, including a large rifle, an axe, and a sword. She has long, black hair and wears dark colored heels.

When she arrived at Punk Hazard, she wore goggles around her eyes, which became partially filled with tears after she began to cry. Upon her arrival at Punk Hazard she was seen carrying new weapons on her back: a large flamethrower and a large Gatling gun.

10 years prior, her hair seemed less curvy and she wore a ribbon.

Baby 5 is an incredibly emotional person, crying and attacking Donquixote Doflamingo at the same time. Despite this, she is still very eager and willing to attack her enemy even in such an emotional state.

She cannot say no to anything anyone asks of her, under the impression that she is needed whenever she is asked to do something, even if the person made it clear that it was a mere joke right afterward. This behavior his caused by her trauma of being abandonned as a child, and thus always feeling the need to be useful to prevent being rejected.

This can cause her to want to marry, help, lend money to anybody who asks or even buy weapons from someone despite having no use for them due to her ability already granting her all forms of weapons, while naïvely believing the salesman in that the owner of the weapons would be blessed with happiness. As a result, she has a debt of 98,000,000 berrys and eight late fiances. When she is unable to help a person, she deeply regrets it to the point that she wants to commit suicide.

She still tends to get emotional during interrogations, as she slapped Law in order for him to answer to Doflamingo, only to cry and seek comfort from Buffalo moments later.

Baby 5 ate the Buki Buki no Mi (the Arms-Arms Fruit). A Paramecia-class Devil Fruit that allows her to change her entire body into any kind of weapon she likes.

According to the fruit description, all of her body is made of weapons. She can transform parts of her body into either blades or firearms, or her entire body into a giant sword, missile or sickle for her partner Buffalo to wield or launch as appropriate, alongside the versatile weapons she can produce from her own body.

She also carries on her back what appears to be a Gatling gun and a large flamethrower, as well as a sword strapped to her thigh. She showed great skills in using the Gatling gun, having aimed at the Franky Shogun from a distance, with the rounds causing quite some accumulative impact, despite the robot's durability blocking all of it. She bought these on a whim due to her personality flaw and the salesman's sweet talking of her into it, despite the fact that, as noted by Buffalo, she is a weapon herself and does not need them.

Baby 5, whose true name is unknown, was abandonned as a child by her parents. Believing she was abandonned because she was useless, she became obsessed with the idea of being useful, and became unable of saying no to anyone. She joined the Donquixote Family at 8 and was put under Rossinante's orders. She then met Buffalo, an other kid member of the crew, and became friend with him. Later, they met a new kid member, Law, and became friends with him, even telling him their true names.

At only 14, Baby 5 participated in the takeover of Dressrossa. Once an adult, she became an officer of the Donquixote Family and was put under Pica's order, alongside Buffalo, who became her partner.

Due to her inability of saying no, she accumulated a debt of 98,000,000 berrys and was engaged 8 times. 8 times, Dofflamingo killed her fiance and destroyed his village as retaliation for abusing Baby 5's kindness.

The 8th time, she tried to kill Doflamingo but the Shishibukai used his power to force her to put her own gun on her head. She then joyfully said she will be happy to take her own life to please her captain. Doflamingo rather chose to send her and Buffalo to Punk Hazard to exfiltrate Caesar Clown, Monet and Vergo, wich she immediately complied. Once there, the two pirates attacked the Franky Shogun. However, they were quickly overpowered by Fanky and choose to retreat, but managed to take Caesar with them. They were then attacked and defeated by Nami and Usopp.

After their defeat, Law used his power to behead the two pirates without killing them. He then send their heads toward Dofflamingo, who was travelling to Punk Hazard. Dofflamingo took the heads of his crewmates with him and arrived to Punk Hazard, where he retrieve their bodies.

Baby 5 and Buffalo came back with Doflamingo to Dressrossa. Later, Baby 5, like all the other officers, was mobilized to fight the Straw Hats and their allies from the Colliseum. Alongside Lao G, she fought Sai and his grandfather Chinjao. During the fight, Lao G stated that Baby 5 was just an expendable pawn for the Family, as her obsession to be usefull imply she will always do her job, no mather what it is and even it means sacrificing her life. This statement angered Sai, who claimed he will take Baby 5 away from this fate. Earing this, Baby 5 became convinced it was a wedding proposal and immediatly fell in love. Sai then promised to marry her.

Baby turned her back to the family and choose to aid their enemies. After the defeat of Doflamingo, she went onto join her new fiancé Sai in celebrating and made amends with her old enemies. She joined Sai in the Happo Navy and the Straw Hat Grand Fleet.

She and Sai later returned to Sai's home in North Blue where she watched him break off his engagement to former fiancé who beat him up. Baby 5 tended to him before he was given proper treatment for his injuries. Sometime later, the pair were married, much to her happiness as she clung to his arm. 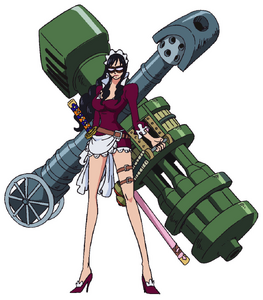 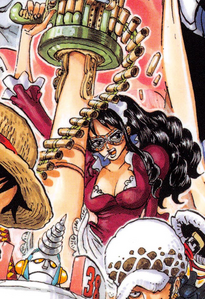 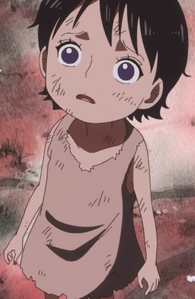 Baby 5 when she was eight years old. 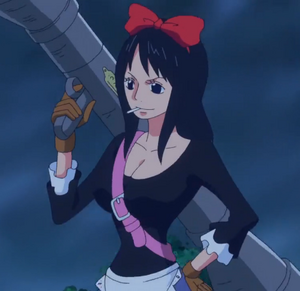 Baby 5 when she was fourteen years old. 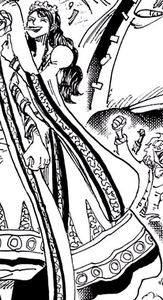 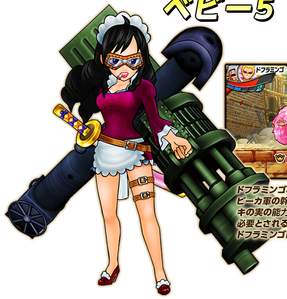 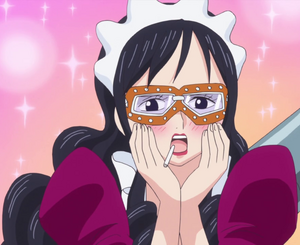 Baby 5 getting the impression that she is being needed. 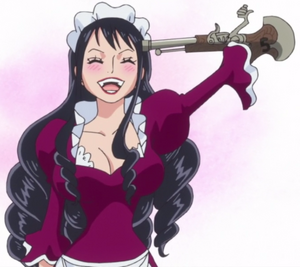 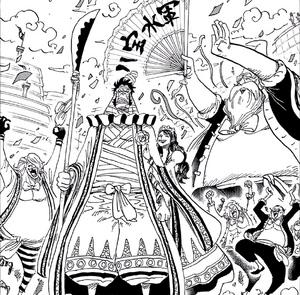 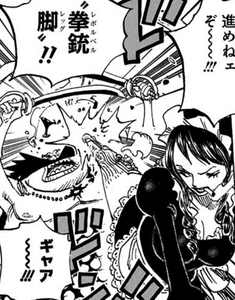