Slay the Darkstalkers that she is hired to hunt.

Baby Bonnie "B.B." Hood (also known as Bulleta in Japan), is a character from the fighting game series Darkstalkers, designed by former Capcom illustrator Akira "Akiman" Yasuda. Despite looking like an innocent girl (it should be noted her appearance is inspired by Little Red Riding Hood), she is actually a murderous psychopath (though she might be sociopathic, and is rather insecure).

As a Darkhunter, she kills Darkstalkers primarily for money and pleasure. As an homicidal maniac, it is advisable to stand aside of her way. She made her first appearance in Darkstalkers 3 (known alternatively as Vampire Savior: The Lord of Vampire in Japan).

She is voiced by Miyuki Matsushita in all of her appearances to date in Japanese.

Long ago, thousands of creatures from Makai had appeared in the human world. After their appearence, many of these creatures have earned the interest of humans, whether it is for scientific purposes or as fireplace ornaments. The Hunter's Guild was established to meet the demand for these clients and failing to capture the victim would only mean one thing; death. However, some of these hunters can only kill wild beasts from Makai, which means they're no match for a Darkstalker. Amongst these hunters, there was B.B. Hood, who is consireded a "Special S-Class" hunter. Lower level Makai monsters shake in fear from meeting her gaze, and is capable of deflecting many kinds of physical and mind attacks

Her terrible heart was dark enough that Jedah Dohma considered her a Darkstalker and teleported her into the Majigen as a soul worthy of salvation. After being pulled into the Majigen, where normal humans would die instantly, she simply gave a gigantic grin and said, "Hahaha, they're all mine... it's been a long time since a job this big."

B.B. Hood has no special abilities, as opposed to Donovan or Hsien-Ko. However, she is a master at using any kind of weaponry. Her weapons of choice are a seemingly endless supply of two handed weapons, heavy guns and ammunition she keeps hidden in her basket. She seems to favor her uzi machine guns over the others and is skilled at beheading enemies with her combat knives, as well as hand to hand combat. Her basket also doubles as a rocket launcher and she can launch landmines from her skirt. She has two accomplices, muscular male thugs named John and Arthur who she can call to assault her foe with additional firepower; another associate is a man in a business suit named Mr. K, who appears after each of her victories to hand her a new assignment.

In her Darkstalkers 3 ending, she prepares to murder a family of werewolves, heavily implying that her constant killings have given humans the reputation as the most feared monsters of all. 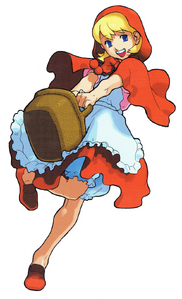 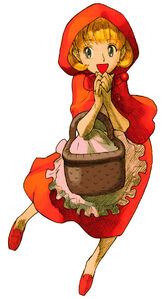 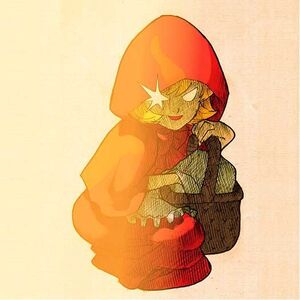 Artwork from SNK vs. Capcom: The Match of the Millenium.
Add a photo to this gallery 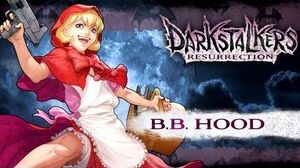 Retrieved from "https://villains.fandom.com/wiki/Baby_Bonnie_Hood?oldid=4185567"
Community content is available under CC-BY-SA unless otherwise noted.