Bossing his minions around.
Sleeping.
Causing mischief.
Causing trouble for the Yoshis.
Eating.

Defeat the Yoshis (failed).
Steal the Super Happy Tree to drain all happiness from Yoshi's Island (succeeded, but then failed).
Defeat his future self and get back his treasure (succeeded).
Have enough yarn to make a "big new castle".
Collect the Dream Stones.
Defeat the future Mario Bros. and their younger selves.
Obtain pieces of the Cobalt Star (all failed).

Baby Bowser, also known as Prince Bowser, is a major antagonist in the Mario videogame series, acting as the central antagonist of the Yoshi series and as a minor antagonist in Mario and Luigi: Partners in Time. He is Bowser from his days as a child and is not to be confused with Bowser Jr., who in turn is Bowser's only child. He is the archenemy of Baby Mario and the entire Yoshi species.

He is voiced by Caety Sagoian, who also voices Bowser Jr.

All of Bowser's defining characteristics were already present in his baby form, albeit in a much less threatening way. At this young age, Baby Bowser was more of a bratty and spoiled child than an actual villain and the main motivations behind his actions are either self-preservation or just a general attempt to cause mischief.

Most of Bowser's defining abilities (namely the strength and fire-breath) are already apparent in Baby Bowser although in a much less developed way. However, with the help of his primary Magikoopa, Kamek, he is able to greatly enhance both his size and abilities. Of all the baby versions of the Mario series characters, he seems to be the most developed and is more of a small child than an actual baby. He was also already commanding a large number of minions, despite his young age.

Kamek's actions in this game were driven by a prediction of Baby Bowser's future, where he saw that Mario and Luigi will defeat him in many of his future endeavours (which became true on countless occasions). Baby Bowser makes his first physical appearance as the final boss of Super Mario World 2: Yoshi's Island. Appearing at the end of his castle as Kamek demands Yoshi to hand Baby Mario to him, Baby Bowser complains at the current noise, crushes and throws Kamek aside, and demands to ride the "gween donkey." His first battle has him use a ground-pound to make shockwaves, and he can jump on Yoshi's back if Baby Mario is thrown off. After the tiny tyrant is beaten, Kamek uses his magic to make him grow to a gigantic size.

The second phase begins in what remains of his room. The now massive tyke sends down debris to destroy part of the floor, breathes fireballs, and stomps his way to Yoshi. If Baby Bowser gets too close to Yoshi, he destroys the ground, sealing Yoshi's fate. The player must get the large eggs the Baron Von Zepplin's carry to throw at Baby Bowser. After this in done enough times, he returns to his normal size and is defeated. Scooping up the young ruler, Kamek swears revenge on Yoshi, as Yoshi gets to the stork to deliver Baby Mario to him.

In this game, Baby Bowser swipes the Super Happy Tree to rob the land of joy and turns the island into a pop-up book. At the end of their journey, they find Baby Bowser in his castle, challenging the Yoshi's to a duel. In the battle, Yoshi must shoot Bob-ombs at Baby Bowser as he rides him. In the second part of the battle, Baby Bowser attacks by shooting fireballs, throwing bombs, and making shock-waves. After several more hits, the young tyrant surrenders, weeping as he's carried back by his Toadies and saying that the fruit didn't taste good regardless.

In Yoshi's Island DS, Baby Bowser is relaxing in his fortress when his adult version warps in, wanting to steal the star children to control the universe. Stolen by the future version of Kamek, Baby Bowser gets kicked out for insulting his older self.

In the fall, he vows vengeance and shouts that both versions are the same, to no avail. Noticing Baby Mario, he tells him he saw his brother in Bowser's Castle. After this, he teams up with Yoshi for the world to "kick some major enemy butt, of course!" With Baby Bowser, Yoshi trades his ability to swallow his foes for having Baby Bowser being able to spit fire, defeating his foes and melting ice. He leaves when Big Guy the Stilted is defeated, and tries to hitchhike on Future Kamek's broom, only to fall from a weak grip.

Baby Bowser returns in this game after not being seen for seven years, wanting to turn Egg Island into a resort. At the end of the game, a similar scene of him awakening from slumber and fighting Yoshi begins, with him turning giant after. After he is beaten, his future self reappears, making Yoshi defeat him.

In this game, Baby Bowser wants to have enough yarn to make himself a castle. In this battle, Yoshi must attack Baby Bowser by throwing a yarn ball at him and then ground-pounding him. After the first phase, Kamek makes him a giant using the Wonder Wool. In this phase, Yoshi must unravel giant yarn balls to get smaller yarn balls to throw at eight weak-points, shown as magenta Wonder Wools on Baby Bowser's body. After this, Baby Bowser is taken back by Kamek to the moon, before Kamek is scared by Poochy, causing him to drop the tyke.

Baby Bowser and Kamek are once more the main antagonists in Yoshi's Crafted World. In this game, he steals the Sundream Stone with Kamek, wanting to find the five Dream Gems from it. However, while trying to steal if from the Yoshis and struggling over it, the gems in it end up flying out and scatter across the island, so the Yoshis set out to find and recover them to restore the Stone before they can. Baby Bowser joins Kamek in the quest, dismantling the train in the first level and making the bosses. He is also the final boss of the game, with his phases being inside a large robot and then growing to a large size once more.

Baby Bowser currently makes his only appearance in the Mario & Luigi series in Mario & Luigi: Partners in Time as the secondary antagonist. First appearing to try and snatch Baby Peach, only to be defeated by the Baby Mario Brothers. However, Shroobs attack Peach's Castle immediately after this, ironically forcing Baby Bowser to save everyone on his Koopa Cruiser. The Koopa Cruiser is pursued by the Shroobs and passes over Hollijolli Village, where Baby Bowser rescues the adult Mario Bros. (who have been sent back in time), but he only does this to stop Baby Peach's crying.

When everyone is on board, Baby Bowser gets a message from Princess Shroob, who destroys the Koopa Cruiser, which crash lands the young tyrant back into his fortress. Both versions of the Mario Bros. team up and take the first Cobalt Star piece from a treasure chest his castle, which angers the young prince and causes him to betray them. Tracking down both versions of Mario Bros. to the Vim Factory, he steals the two Cobalt Star Shards out of revenge.

Later, Baby Bowser heads to Yoshi's Island with Kamek, where he hoards a large pile of Yoshi Cookies. After heading to the other side of the peak of the mountain he is on, the Baby Brothers devour the Yoshi Cookies, much to Baby Bowser's fury. The Bros fight Kamek, who is defeated as the young prince runs off. Baby Bowser is cornered and devours the Cobalt Star Shards as revenge, before all parties being ironically eaten by Yoob. Inside the beast, Baby Bowser is put inside a Yoob Egg. After the brothers defeat Sunnycide, Baby Bowser is freed with the other Yoshis.

Back on the island, he lies about the scenario, saying that he was the one who saved them. Praising him as a hero, the Yoshi's give him all their cookies. As the Mario Bros. and Toadbert inform them about the truth, Baby Bowser gets sick on the cookies, upchucking the Cobalt Star Shards before the pieces knock him into the sky.

Baby Bowser later reappears in Thwomp Volcano, where he meets his future self, who has been sent back through the time portals. The two Bowsers do not recognize each other and argue, but team up after discovering their mutual hatred of the Mario Bros. After being defeated by the Mario Bros, they are thrown upwards by a Thwomp Elevator. As Bowser falls back through the time portal, Baby Bowser shouts he will become more stronger and more evil than his future self before landing on the Shroob Mothership.

He then returns after Princess Shroob is defeated to once again claim the Cobalt Star for himself. Although he is warned, he puts together the Cobalt Star Shards, freeing Elder Princess Shroob, who turns him into a poison Shroob Mushroom. After the alien monarch is defeated, the unconscious Baby Bowser is transformed to normal by Baby Luigi's tears, accidentally providing the cure to save the Mushroom Kingdom. In the end, Baby Bowser returns to his castle with Kamek, lamenting about his lost treasure. 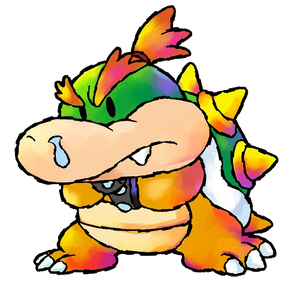 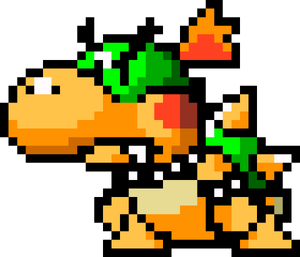 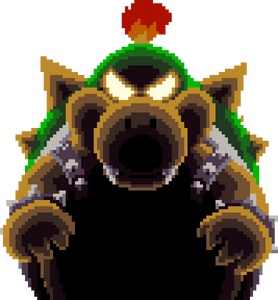 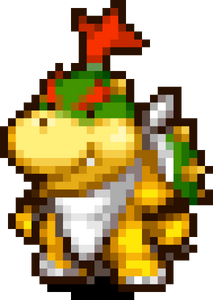 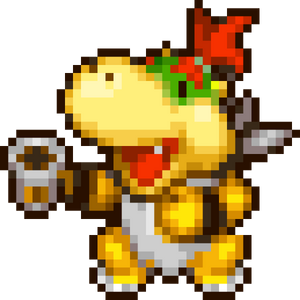 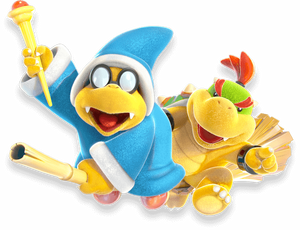 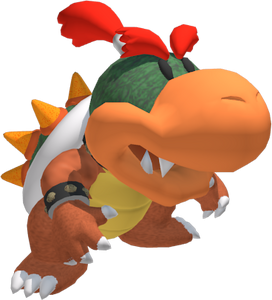 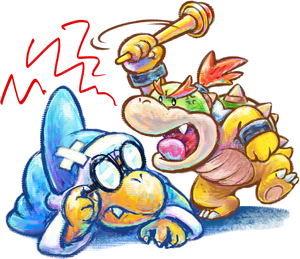 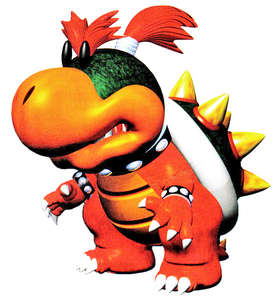 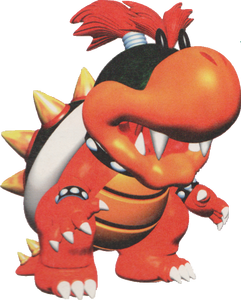 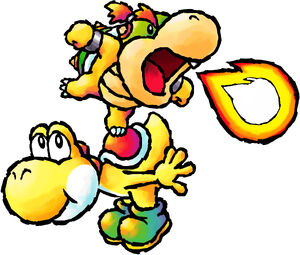 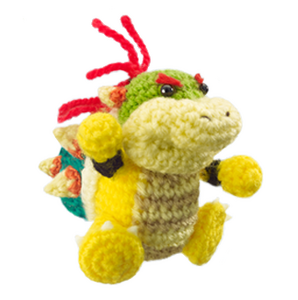 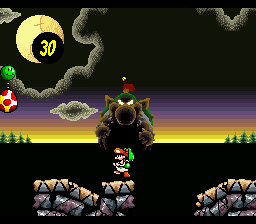 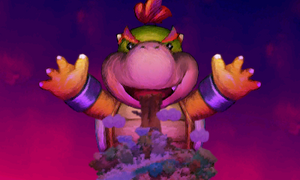 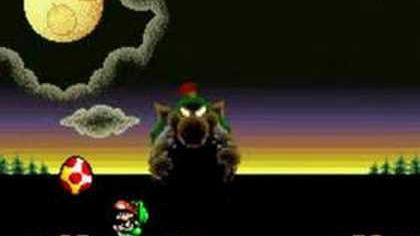 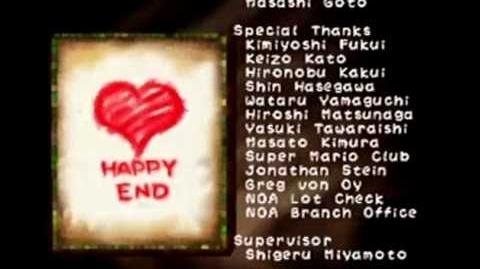