NOTE: Do not add "Kids" to the category list, as it is clearly stated that she is actually an adult.

Mary Louise Dahl, known better by her alias Baby Doll is a minor antagonist in Batman: The Animated Series. She is a former TV star turned psychotic criminal who suffers from hypoplasia, a medical condition that prevents her from physically aging. Although popular with many fans, she has yet to make any major appearances in any of the mainstream comics or other DC media.

Due to her hypoplasia, Baby Doll looks like a small kindergartener, even though she is actually over 30 years old. She has curly blonde hair tied in two pigtails with dark purple ribbons, light blue eyes and wears a light purple short-sleeved dress with a dark purple collar, cuffs, and buttons, frilly white panties, matching ankle-length socks and black Mary Jane shoes. In her first TV appearance, she wore the same costume that she wore in her TV series "Baby-Doll" and talks in both her adult and little girl voice, depending on which voice is the most relevant to the situation. She carried an old doll of hers called "Mr. Happy Head" containing a hidden gun, with the end of the barrel disguised as one of his eyes.

When Batman: The Animated Series was revamped, many characters were redesigned, as was Baby Doll. In her new form, Baby Doll still looked like a 5-year-old, but now wore a pink short-sleeved knee-length dress with white buttons, collar, frilly cuffs, and sash, had simpler hair and wore black, with a bit of red, lipstick.

Marion Louise "Mary" Dahl, was a TV actress who was born with systemic hypoplasia, a rare condition which kept her from ever growing, meaning that she spent all of her life looking like a toddler. She became famous for a brief period when she played the title character in the fictitious TV sitcom "Love That Baby" (when she was 20, though she still looked like she was 5). She and the show were wildly popular, but as the series got older, the ratings dwindled. In the final season, the producers of the show decided to add a new character; Baby Doll's cousin who was called Spunky. Baby Doll was angry at Spunky because she thought that he was stealing her spotlight, especially on one occasion on her birthday episode, where she got her face pushed into her birthday cake by Spunky. Furious, she left the show in order to turn herself into a proper dramatic actress. Her first role other than Baby Doll was in Macbeth.

Unfortunately, the reviews for the play and her acting were terrible, ruining Mary's chances of becoming a popular celebrity. When her career went down the tubes, she tried to get Baby Doll back on the air because it had been canceled when she left, but the networks turned her down. After that, Mary tried to get any job that came her way but was always shunned and never got the role. Without any jobs coming her way, Mary went through a rough, depressing period of her life where she realized that the only time when she had been truly happy was when she was in the show as Baby-Doll, when she used to have a "family" in the show and was adored by millions of viewers. Keeping her persona as Baby Doll permanently, Baby went around with her 2 hired thugs as well as her personal caretaker Mariam, and kidnapped all of the original cast of Love That Baby, bringing them together so that she could get revenge on Spunky and her fellow cast members.

She tied all of the actors up in the Baby Doll sets and bought along a birthday cake. After pushing Spunky's head into the cake, she then got a stick of TNT, put it on the cake like a candle and lit it, planning to blow up the cast members. Spunky ruined her plan by grabbing the TNT with his mouth and throwing it to the other end of the studio, throwing it far enough away that it exploded without hurting anybody. Batman crashed into the room and revealed that the actor who played Spunky wasn't the actor but was actually Robin in disguise. After Batman and Robin had realized what Baby Doll was doing, they had gone to the actor, told him what was going to happen and the man had let Robin take his identity. When Robin had been captured, he had sent a radio signal to Batman who had traced it and found out where Baby Doll was.

While Robin released the captives, Batman chased Baby into a nearby fair, and then into a Fun House. Inside the Fun House, Baby came across a hall of mirrors. Within one of the distorted mirrors, Baby saw herself as an adult, how she believed she should look. Knowing this to be fake, just as her character, Baby Doll shot and broke all of the mirrors before breaking down mentally and running out of bullets. When the Batman walked up to her, she went peacefully, uttering her infamous catchphrase "I didn't mean to".

Love is a Croc

The next time we see her in a substantial role, it has been a few years. She’s now the manager/concierge of a hotel but a rude guest checking in with his wife made fun of her medical condition, the history of her character and being a criminal. Feeling like an outcast, she sees a news report about Killer Croc and identifies with him because he too is an outcast due to a medical condition. She helps him escape from prison and the two form a criminal duo: Baby Doll as the brain, and Croc as the brawn. Baby later found out that Killer Croc was cheating on her.

Enraged, she later plans to kill both Croc and herself so that they could be "together forever" in their next robbery. While it seems that they're doomed, Batman and Batgirl come crashing in to stop them. Croc, originally at a disadvantage, gained the upper hand and started a fight with her and Batman. During the fight, Croc was knocked out when a blast of hot water shot out of a pipe he had torn from the wall as a weapon, leaving him unconscious. Baby felt sorry for Croc and yet again goes peacefully when Batman came up to her.

Baby Doll using one of her dangerous gadgets.

Baby Doll appears in a cameo as a bomb-filled doll in Batman: The Brave and the Bold.

Baby Doll and Killer Croc teaming up to go on a crime spree. 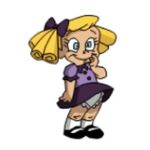 Baby Doll in Batman: White Knight.
Add a photo to this gallery 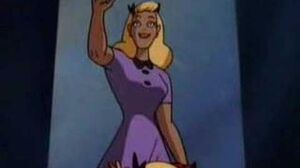 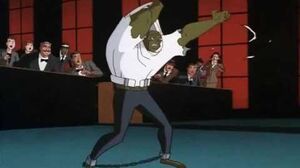 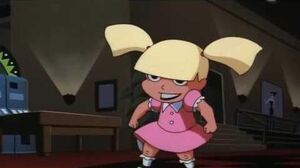 Retrieved from "https://villains.fandom.com/wiki/Baby_Doll?oldid=3849215"
Community content is available under CC-BY-SA unless otherwise noted.