Baby Edward "Eddie" Neutron is a character in the TV series The Adventures of Jimmy Neutron: Boy Genius. He is Jimmy's evil baby cousin.

He was voiced by Mark DeCarlo.

Eddie is mean, evil, ruthless, selfish, sadistic and bratty. He believes he is a lot smarter than Jimmy (which is somewhat accurate since he is a baby). When there are adults around, just when he talks in his normal voice, he then suddenly talks in a baby voice and says, "Goo", feigning innocence. He was plotting to do away with the entire clan so he could get Great-Aunt Amanda's inheritance.

Despite his intelligence and adult voice, he is still as mentally immature as he is physically. He cries when he is upset, he threw a fit when Jimmy destroyed his rattle, demands his cup, and always demands a diaper change from peers and others. He always smells and has a full diaper on.

Baby Eddie first appeared in "Clash of the Cousins" where he's the antagonist and villain. He is first smiling when the family is at a family reunion and he then grins as the bomb he placed inside the spatula nearly kills the family but it fails to kill them. He then begins to cry like a baby and Jimmy gets blamed for it and is banished into the house after the parents and relatives except for Jimmy's uncle and Hugh's twin-brother, Gomer believed that Jimmy is the one who destroyed the stuff at the reunion even though he hasn't done anything wrong, but then Baby Eddie managed to get inside to reveal his plan. The windows and door shut tight and the room becomes dark. He laughs and traps Jimmy, Sheen, Carl, and one of the family members, Gomer. He traps them in electrified rings and shocks Goddard with his rattle and grabs his battery and locks Jimmy and the gang in the room. He goes outside and places the battery in the cake but Jimmy comes out in time to save everybody and he reveals Goddard had an extra battery and he attacks Eddie, but the parents and relatives except for Gomer become furious until Baby Eddie Neutron talks in his man voice and he is sentenced to life on "The Leash" as the family is forced to apologize to Jimmy.

Baby Eddie reappeared in "The League of Villains" to get revenge, with most of Jimmy's enemies, whom all joined forces to become the titular League. 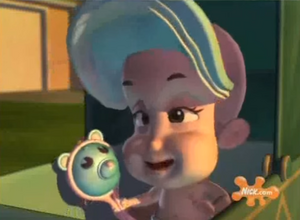 Retrieved from "https://villains.fandom.com/wiki/Baby_Eddie?oldid=4085699"
Community content is available under CC-BY-SA unless otherwise noted.