Devouring those who trigger their death trap.

Devour humans into their death trap.

The Killer Klown Offspring are minor antagonists in the 1988 sci-fi/horror comedy film Killer Klowns from Outer Space. They resemble vultures with long necks, such as The Giant Claw from the 1957 film of the same name. They grow from popcorns planted in a dumpster and in Debbie's bathroom. Jumbo was seen putting them inside a dumpster.

Their portrayer is unknown.

One burger restaurant employee was curious about the noise inside the dumpster, then was grabbed in screaming getting killed by the offspring. When Debbie was done with her shower, the Killer Klown Offspring had tried to bite her. Debbie used her shower handle to trap one of the Offspring into swaying around everywhere and she used a towel to cover up the other Offspring to run from her bathroom.

Slim used a Tyrannosaurus shadow puppet to shrink several people to fit inside his hands and put them inside his bag full of baby klowns that are in their unborn phase as popcorn (feeding the babies).

The offspring's current locations remain unknown: they possibly still remain in the places they were hatched, including Debbie's bathroom. This would mean that Debbie is unable to get back to her own apartment room and they would grow into a bigger size. It was likely that the police came in to kill them off once they were became aware that the Killer Klown genocide was a fact.

The Klown Popcorn
Add a photo to this gallery 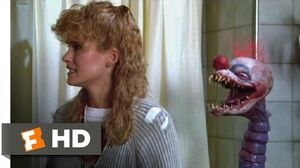 Retrieved from "https://villains.fandom.com/wiki/Baby_Killer_Klowns?oldid=3420823"
Community content is available under CC-BY-SA unless otherwise noted.