Leader of the Demonic Toys

Revive "The Kid" and conquer the world (I).

In the first film she kills a number of people in order to feed their fear, pain, and souls to her master.

When a bomb shatters his skull on the concrete floor of the Toyland Warehouse the demon The Kid is again awoken. He brings to life (or back to life) several toys to kill for him. One of these is Baby Oopsie Daisy. Judith Grey learns of their existance and calls the alien crime-fighter Brick Bardo to help her stop them. Brick takes with him his new girlfriend Nurse Ginger. When The Kid discovers Ginger is in the factory he comes up with the plan to transfer his soul into the body of Baby Oopsie Daisy, so he can have sex with Nurse Ginger, make the baby, eat its soul from the shell, and shall become a human. As Baby Oopsie Daisy is about to kill Brick, Ginger breaks free, cuts him loose, and gets carried away by Zombietoid, who continues to go after Brick. Brick and Zombietoid begin fighting, until Zombietoid's machete gets caught in an electric socket, killing Zombietoid. After finding his gun, Brick continues on to kill Jack Attack. Brick finally gets to the dollhouse before its too late and kills Baby Oopsie Daisy, who's been taken over by the demon. Brick continues to call the police and tells them that Judith Grey died in the line of duty, and leaves, along with Nurse Ginger to a cab that's on its way back to Pahoota.

An unseen stranger with a pair of gloved hands picks up the pieces of the destroyed toys and starts stitching them together. The only toys the perpetrator could fix correctly were Baby Oopsie Daisy and Jack Attack. The unidentified man then puts the toys in a crate, and is handed over a suitcase full of cash. The other man who gave the money to the perpetrator then leaves with the toys. After that, they them to the castle in Italy, where it was built in the 13th century, believed to be built over the temple of Jupiter Optimus Maximus by the local villagers. It was once ruled by Fiora Borisoff, a Bulgarian empress who used to practice black magic and fled her own country when her people revolted her. Since then, the castle was home to Italian royalty, and a few murderous madmen. The paintings are believed to have demons hidden in the background. If any one of them does so, then they represent one of Fiora's personal demons. The toy, named Divoletto was found by Caitlin and came to life. Divoletto walks around the castle and finds Baby oopsie and Jack Attack. He touches them, his source of life goes through them, and the demonic toys come back to life. Baby Oopsy Daisy then welcomes Divoletto to the club and quickly the trio dolls become friends. Eric then sees Divoletto walking around and finds himself locked in the dining room. As he tries to escape, Baby Oopsy Daisy stabs him in the foot with a kitchen knife and Jack Attack pops out of his box and slashes Eric's throat with his tail. Meanwhile, Mr. Butterfield finds some valuable items in his room and stuffs them into his clothes. As he tries to sleep, the toys walk into his room and Baby Whoopsie and Divoletto climb on the wall where two swords are hanging. Jack Attack forces Mr. Butterfield to jump out of bed and the swords come down on him, slicing his head off.

Baby Whoopsie appears and stabs David in the arm. Dr. Lorca pulls out a small gun hidden in his coat and shoots at Baby Whoopsie. Dr. Lorca then continues to threatens to kill Caitlin if Divoletto is really a replica. David then punches Dr. Lorca in the face and steals his gun. Lillith, David and Caitlin runoff to escape and they run into Lauraline, who survived her attack by Jack Attack. Dr. Lorca grabs a hatchet lying in the hallway and runs into the room, when suddenly Baby oopsie jumps on his back and stabs him in the skull, fulfilling Lillith's vision.

David then smashes Divoletto's head with a shovel, but it's revealed that Divoletto was one of Fiora's personal demons. The demon then sucks Fiora's spirit out of Lillith and brings her through the portal back to hell. The demonic toys then attack them and David cuts their heads off with the shovel, killing them. The next day, David, Caitlin and a spooked out Lillith leave the castle, with the demonic toys remains so no one else can find them, along with the clay vessals containing Fiora's personal demons. 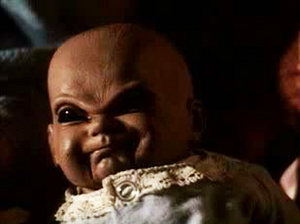 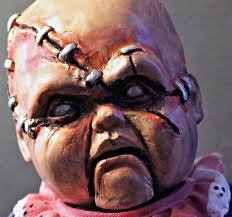 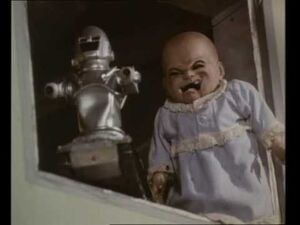 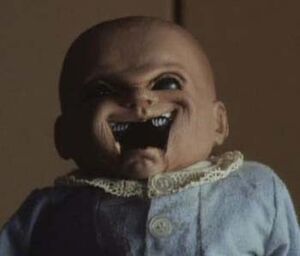 Add a photo to this gallery
Retrieved from "https://villains.fandom.com/wiki/Baby_Oopsy_Daisy?oldid=3552005"
Community content is available under CC-BY-SA unless otherwise noted.