Collecting snuff films for his father.

Do his father's and sister's bidding and kill anyone who threatens them.

The Babyface Killer is the secondary antagonist of The Hills Run Red.

He was portrayed by Raicho Vasilev.

Born from incest when Wilson Concannon, an infamous horror film director, raped his 13-year-old daughter Alexa, the killer was locked away in the shed as a young boy where he cut off his face and stitched on a babyface mask in hopes of impressing his father. Beforehand, Wilson was filming his horror "masterpiece" The Hills Run Red where a boy chopped his face off, donned a babyface mask, and went on a murderous rampage.

Wilson, with his sociopathic mind, wore the babyface outfit as he filmed himself slaughtering the actors as the young Alexa was forced to film and edit. However, when Wilson finally finished the film, it was quickly wiped out of popular culture as deemed too scary and violent.

The film follows Tyler, who is obsessed with a lost horror film The Hills Run Red. As both the director and the film itself are completely wiped out of popular culture. Tyler and Alexa, now an adult stripper, headed out to find the latter's father in the woods.

As such, the two went with Serina and Lalo, Tyler's friends, only to be kidnapped and tied up by rednecks on their journey, who had intent to kill and rape them all. However, the real Babyface Killer, now a murderous adult as well, appears before slaughtering the homicidal rednecks only to disappear shortly afterward.

After breaking out of their bounds and into the director's house, Tyler and his friends were attacked by Babyface. Tyler was then knocked out in a brutal conflict with the deranged murderer, only to wake up yet again tied to a wheelchair with, much to his surprise, the lost director of The Hills Run Red, Wilson Concannon. Concannon then reveals, as aforementioned, that Babyface was conceived when he raped Alexa as a young girl and the reason the movie was so realistic was that the actors were actually being murdered, thus explaining why all of the film's actors vanished.

This is all meanwhile as Babyface viciously rapes Serina as Alexa, who revealed to her former friends that she is another murderous psychopath wanting to prove herself to her deranged father, begins taunting and torturing a tied up Lalo.

After killing Lalo, Alexa is shot by her own father as he states he's the only director in the family. This angers Babyface, triggering him to fight his sociopathic dad and viciously kill him as well, all filmed and rooted on by Tyler. After killing his father, Babyface dashes towards Tyler into a bloodthirsty high but is caught off guard and killed by Serina as she escaped and stabbed him in the back with a long iron staff.

Nearing the end of the film, Alexa is revealed to be alive when she knocked out both Tyler and Serina, still keeping Serina alive as she tied Tyler to a chair where he gleefully watched the original uncut version of The Hills Run Red. Serina is revealed to be extremely close to giving birth to Babyface's child, as the movie eerily ends with Alexa planning to use Babyface's mask for her nephew and sings it a lullaby. 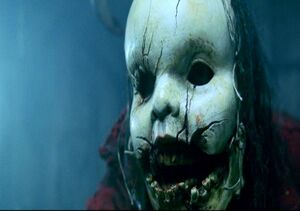 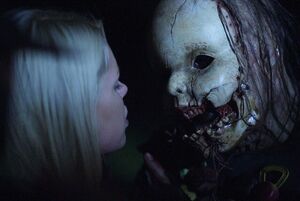 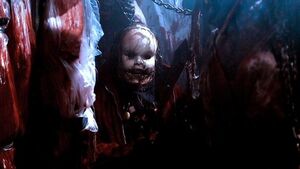 Add a photo to this gallery
Retrieved from "https://villains.fandom.com/wiki/Babyface_Killer?oldid=3999694"
Community content is available under CC-BY-SA unless otherwise noted.