Guardian of The Babylon Treasure

Defeat those he deems "greedy".

The Babylon Guardian, also known as Angelus the Gatekeeper in Japan, is the final boss and only boss in Sonic Riders. Somewhat confusingly, "Babylon Guardian" is also the name of the stage in which he appears in. He is also referred to as "the guardian God of Babylon" when choosing his stage.

He was voiced by Kenji Nomura in the Japanese version, and by the late Maddie Blaustein in the English version.

After getting the Key to the Babylon Guardian back from Sonic, the Babylon Rouges enter Babylon Garden to find the Treasure of Babylon. Just as Sonic and friends are about to leave, a loud roar emanates from the palace. Sonic and friends then decide to join up with the Rogues to see what's going on. A large creature forms and reveals itself to be the Babylon Guardian. He then attacks them because he believes them to be greedy. After Sonic and his allies defeated him, the Babylon Garden disintegrates into sparkles in anguish and relinquished the Treasure of Babylon.

Role in the Archie Comics

In the comics, the Babylon Guardian is known as Angelus the Guardian. He's a hologram made by the Ancient Babylonians used to protect the Key underneath Gigan Mountains, but Jet the Hawk, Storm the Albatross, and Wave the Swallow destroyed his projectors, causing him to vanish. 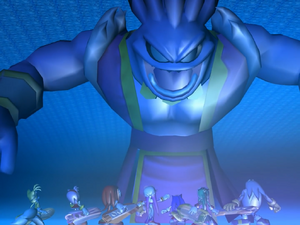 The Babylon Guardian compared to Sonic and his allies. 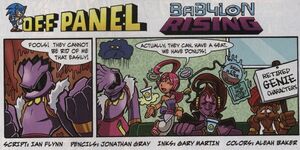 The Babylon Guardian in an Off-Panel comic along with Shahra, Erazor Djinn, and another genie 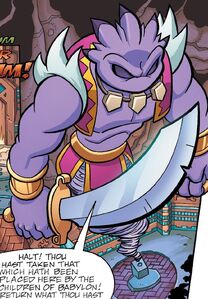 The Babylon Guardian as he appears in the Archie Comics. 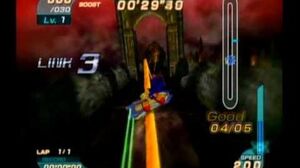