The Babylon Rogues are a group of thieves and recurring characters of the Sonic the Hedgehog series, particularly the Sonic Riders spinoff series. They appear as the (former) secondary antagonists of Sonic Riders and the tetartagonists/anti-heroes of Sonic Riders: Zero Gravity and Sonic Free Riders. They are a group of birds who consist of Jet the Hawk, Wave the Swallow, and Storm the Albatross who share a rivalry with Team Sonic.

They are a mysterious band of treasure-seeking thieves, who have existed since ancient times, with the mantle of the group being inherited from one generation to the next. Each member is a descendant of the ancient Babylonians, an alien race of genie-like beings that got stranded on earth in ages past. While the group initially included the whole civilization, it has over time been significantly reduced due to the Babylonians' shattering.

The Babylon Rogues make their first appearance at the beginning of the game, where Jet, who is studying a cube from his blimp, gets interrupted by Storm. As Wave also follows inside the room Jet's in, all birds observe the cube in hope of finding the Babylon Garden. Wave then informs Jet that Dr. Eggman has boarded their ship, and wants to talk to the three. Eggman appears, noticing a key Eggman was searching for and talks to Jet about that he needs the Chaos Emeralds to summon Babylon Garden. The doctor also mentions Sonic, who both has said emeralds and is similarly fast to Jet, which causes him to boast that Sonic can't outrun Extreme Gear.

Meanwhile, Sonic, Tails, and Knuckles are searching for a Chaos Emerald in Future City. Tails recognizes it on his radar, but as he does, the Babylon Rogues suddenly crash through a glass window, with the Chaos Emerald in tow. As Tails notices the signal was coming from the three thieves, Sonic attempts to run after the three but fails due to Extreme Gear being faster. The three characters then fly away.

The following day, Dr. Eggman announces the EX World Grand Prix, a competition where racers using Extreme Gear to try to win a series of races, with the winners of the race getting all of the Chaos Emeralds. Eggman announces the current racers are the heroes and the Babylon Rogues, who Sonic recognizes are the thieves from earlier. As the heroes are distracted by Amy Rose joining the race, Wave both plants a bomb in Sonic's gear and insults Tails' gear.

Later, Knuckles and Storm run into each other inside a factory, and their angry dispute leads ton them racing, with Knuckles being the victor. Storm reports back to Jet that he lost and assumes Knuckles cheated with a special type of gear, which Wave overhears and scolds Storm for losing on her gear, calling him bad at racing in the progress. Jet cools both of them down and assigns Storm to search for suspicious clues in Eggman's base, for he fears Eggman is hiding something from them. As Jet relaxes, Wave lectures him about his responsibilities, which Jet doesn't care for being reminded by Wave, so he sneaks off, seeing Sonic below.

Soon, Storm meets up with the other two with a page of Eggman's diary, explaining about Babylon's hidden treasures, being advanced technology. Jet doesn't have any interest in the tech, but Wave convinces him, thinking about the possible value of the doctor's interests. Jet is then ready to find the treasure and makes it to the grand finale of the race, where he races against Sonic. Near the end of said race, Jet was originally behind Sonic, but Wave detonates the bomb she planted, allowing Jet to steal the win.

Using the Chaos Emeralds, Jet reveals Babylon Garden, ancient ruins of a former city. However, Eggman then steals the key to get the order to obtain the treasure for himself, as the villains fly off with Sonic and his friends following behind. Sonic is able to defeat Eggman and Jet, but the Rogues unleash the Babylon Guardian, the guardian of the Babylon Guardian. As the guardian is defeated and the treasure is revealed, both groups part, Jet vowing to face Sonic in the future.

They are assigned by Dr. Eggman to defeat Sonic, which they succeeded the first time and they planned to attack Knothole the next day. But when Sonic and his friends, Tails, and Knuckles got Extreme Gears of their own, they beat them in a race and they were defeated.

In the Pre-Super Genesis Wave timeline, the Babylon Rogues showed up near Cocoa Island in their zeppelin, apparently planning to attack the Battle Bird Armada. When Wave and Storm made note of the damage to the Armada's fortress, wondering if other rogues were responsible, Jet simply brushed it off, stating that only the rogues could touch the relics of their ancestors, and they were "going to remind their old buddies why that is". They later went on a quest to steal one of the Sol Emeralds from Blaze the Cat's world (along with Team Hooligan) but failed after being defeated by Team Dark and Team Rose. Then they tried to steal a treasure from Gigan Mountains and were forced back to the Battle Bird Armada, and were assigned to disable the shields over the target city of New Mobotropolis, but were stopped by Sonic and were forced to escape while the Babylon Garden collapses to pieces.

Babylon Rogues don't appear in the comics taking place after the Super Genesis Wave, although they are confirmed to still exist in the Archie universe and are mentioned several times by other characters. 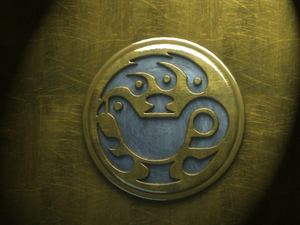 The symbol of the Babylon Rogues.