Back is a four-legged stubby-armed Decepticon-allied Cyclone Mini-Con in Transformers: Robots in Disguise.

Back found Strongarm, knocking her out of the fight temporarily, giving them the chance to escape as Quillfire towed a trailer full of pilfered parts. The Autobots were able to catch up to their boss after lost all the stuff he was trying to steal in the first place).

The Decepticons were forced to flee when Bumblebee and Strongarm arrived. Moving to a nearby truck stop, the trio were again interrupted by the Autobots. Stranded on the plannet, he decided to follow Steeljaw's Pack to help Steeljaw to conquer the Earth. He has two Mini-Cons named Airazor & Divebomb. Later in season 1's 25 episode he became the Alchemor's new prisoner. But was later free again along with all the other prisoners. 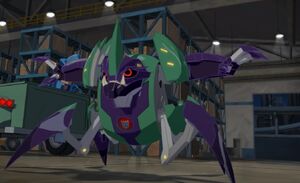 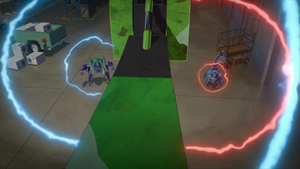 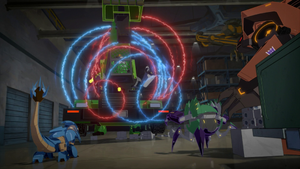