Bacterian is shown to be a rebarbative and unpleasant person, as he is willing to use his stench to give himself an unreasonable and unfair advantage in battle. He also likes to torment his opponents, which is shown in his fight with Krillin. His tactics include farting on his opponents, strangling them, or crushing them with his weight. In the English version, Bacterian is very unintelligent and irrational, using a rather simplified vocabulary with poor grammar. However, in the Japanese version, his dialogue is more refined.

In the fight, Bacterian mostly had the advantage, hitting Krillin with almost all of his disgusting attacks. Although Krillin was able to land one shot, Bacterian remained in control. His first move was using his natural body odor, followed by his hairy pits against Krillin and breathing bad breath at him. When Krillin managed his way past the attacks, Bacterian grabbed the little boy and held him to his foul body, forcing Krillin to breathe in the putrid odor surrounding the powerful brute. Although krillin nearly suffocated from holding his breath, words of encouragement from Goku made Krillin fight back and make his way out of the hold.

Bacterian backs Krillin into a corner and begins rubbing his hands on his sweaty crotch before placing it on Krillin's face. The attack nearly causes Krillin to pass out. When Krillin still didn't give up, Bacterian cought Krillin in a tough spot, threatening to teabag Krillin while Krillin was in the ring corner, forcing Krillin to either jump out to escape or have his face come in contace with Bacterian's crotch, however, Krillin finds himself in another tough spot when Krillin attempted to escape the corner Bacterian had him in by running between Bacterian's legs. Bacterian caught Krillin, sitting on him, and attempted to get him to quit by hopping up and down on him and crushing him. When Krillin was able to catch Bacterian by the pants seat, Bacterian gave krillin a "surprise" by letting loose a long, loud, powerful and extremely disgusting fart on the boy, right when his lung capacity had hit its limit, forcing Krillin take deep breaths of Bacterian's flatulence and butt. The unbearable odor overtook Krillin. The move was followed by sitting on him with full force for a minute and then rubbing his stinky buttocks on Krillin's entire body, causing the foul stink of his gas to sink into Krillin, leaving his body with a wreaking odor, and sheer power of the stench paralyzing him.

It seems that all hope is lost for Krillin. This is until Goku assures Krillin that because he is missing a nose, he is just imagining the malodorous smell (a joke refering to the artist's, Akira Toryama's, depiction of him). With this reminder, Krillin almost instantly makes his comeback gaining the advantage against Bacterian, whose stench can no longer work to his advantage. Krillin defeats him by farting in his face which ironically knocks him out. The World Tournament Announcer even says that even though Bacterian may be used to his own stench another persons will still stun him.

While Krillin and Goku jump with happiness, Goku, the announcer, and the audience react to Krillin's stink, still covered in the odor of Bacterian.

Later on, Bacterian fought Tambourine, but was killed when Tambourine electrocuted him with his hand. He is later revived by the dragon balls. 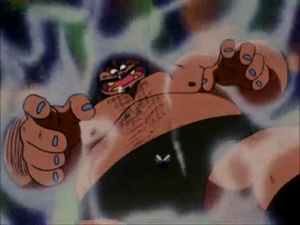 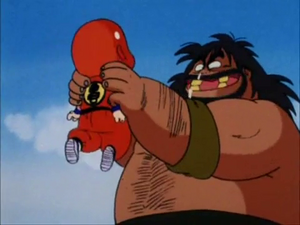 Krillin resorting to holding his breath. 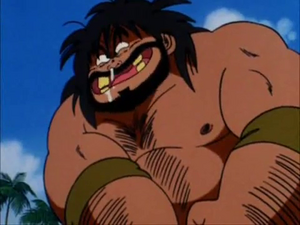 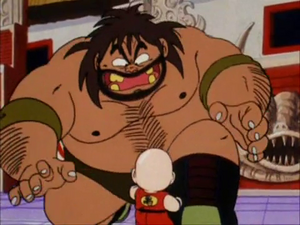 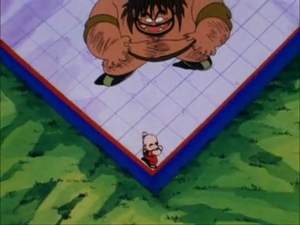 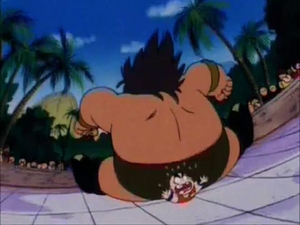 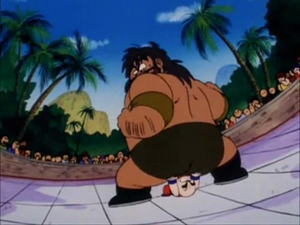 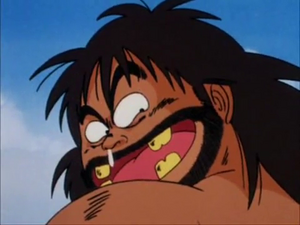 Bacterian telling Krillin that he is in for a "surprise" when he catches Krillin in a vulnerable position. 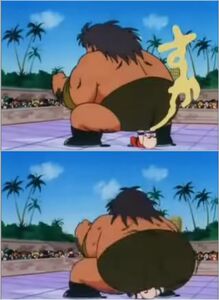 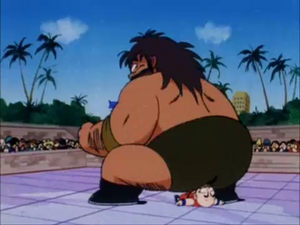 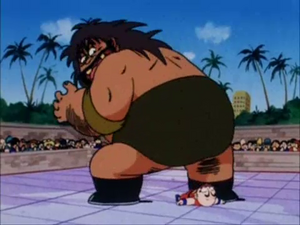 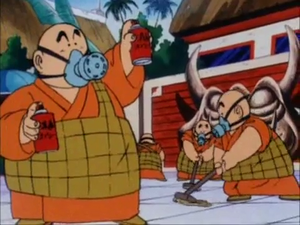 The janitors doing everything they can to get rid of Bacterian's smell.