VeggieTales: LarryBoy and the Bad Apple!

The Bad Apple is the main antagonist in LarryBoy and The Bad Apple!. She is a descendant of Ephraim Apply. She also has her henchman known as Curly the Worm.

She was voiced by Cynthia West.

Everybody first sees the Bad Apple formulating a plan to derail the city's celebration. Her strategy is to enslave everyone by their own personal temptations; once they are incapacitated, she will be free to take over the city of Bumblyburg. She tasks Curly the Worm with identifying the weaknesses of each of the city's most important citizens: Mayor Blueberry, Reporter Petunia, and LarryBoy. Eliminating these three will cripple the city's leadership, communication, and law enforcement, she believes.

She begins by paying a visit to Mayor Blueberry. Her weakness is vanity. Bad Apple preys on this weakness, convincing her that as a representative of Bumblyburg it is her duty to look her best. She spins a web, a trap, in which she claims there are countless beautiful things to improve the mayor's appearance. The mayor, hearing her vanity validated, steps into the trap.

Next, she pays a visit to Petunia, whose weakness is video games. Petunia realizes that her important role in keeping the city informed, but admits that she could use a break. Bad Apple spins another trap, this one containing a test version of the latest, unreleased video game system. The temptation is too much; unable to resist, Petunia steps into the trap to play. This video game is reminiscent of the light cycles from Tron.

Meanwhile, back at the Larry-Cave, Alfred has discovered that the mysterious webs have plagued Bumblyburg before. He goes to the Historical Society to do some research. On an old, scratchy film reel he discovers a scene from the distant past when another apple named Ephraim Apply tried to ensnare the settlers of the new town with diversions at an establishment called Apply's Fun House. The people succumbed and the town suffered, falling under the spell of Ephraim. Obadiah Bumbly arrived in time to liberate the people, and Ephraim Apply was banished from Bumblyburg forever.

The Bad Apple pays a visit to LarryBoy in the Larry-Cave, and, having learned of his weakness for chocolate, uses it to gain entrance to the Larry-Cave. Little by little, she dampens his resolve until he too falls into a trap designed specifically for him. While the Bad Apple tries to tempt LarryBoy into overindulging in chocolate, she wears a purple top hat and recites poems much like Willy Wonka. With Larry indisposed in the "Chocolate Room", she easily breaks Alfred upon his return, ensnaring him by the television in front of his favorite cartoon.

With Bumblyburg's leaders and heroes out of the way, the Bad Apple proceeds to the town square to fulfill her great-uncle Ephraim's destiny. She quickly sets up shop: the new Apply's Fun House 2. She and her sidekick, Curly the Worm, begin to luring the helpless citizens into the funhouse, promising them nonstop excitement.

At the Larry-Cave, Alfred and LarryBoy realize that they need each other's help to fight temptation. Working together they dissolve the webs of their traps, which prove to be susceptible to the sports drink "Umph!" Freed at last, they quickly set about rescuing Mayor Blueberry and Petunia; then they all rush to the town square, joining forces to fight temptation together. LarryBoy goes to battle against the Bad Apple. The funhouse topples and nearly crushes a mother and her baby, but LarryBoy saves them, flinging the Bad Apple and the funhouse out of town. Her final fate is unknown.

Bad Apple appears in the Larry Boy and the Bad Apple video game on both PS2 and GBA as the main antagonist.

LarryBoy's temptation boss level starts off when LarryBoy nearly arrives at the exit, suddenly he finds the Bad Apple waiting for him. She simply taunts him and vows LarryBoy won't escape her trap. After some time the bridge lowers, she suddenly was surprised and growls in defeat. She tells him that there are others that are about to be tempted before vanishing away. The fist boss is basically a simon says where she says a number (note that the cookie platforms have the right number), LarryBoy has to jump onto the cookie with the right number, otherwise the platforms with the wrong one will vanish causing LarryBoy to fall into a chocolate river of temptation. If done several times, the bridge will lower allowing LarryBoy to escape.

Madame Blueberry's temptation boss level begins when Madame Blueberry and the bad apple chat about fashion before LarryBoy shows up. Enraged by his interruptance, she suddenly vows by how cute he looks with his gun, before vowing to heat things up. After LarryBoy breaks all mirrors, she gets more enraged and escapes, leaving Madame Blueberry saved from temptation. The second boss is very interesting to deal with as she will use the mirrors to heat several platforms all over the arena (note that they are dangerous to stand on), when a mirror gets overheated, run up in front of it and spray it with the power drencher (repeat this four times, and she will be defeated again).

Petunia's temptation boss level starts when the Bad Apple comments on how awesome Petunia is with her gaming skills and how outstanding the games were before LarryBoy interrupts. Enraged by him showing up again, she vows how much of a hotshot LarryBoy is. After defeating her, Bad Apple runs off leaving Petunia saved from temptation. The third boss doesn't necessarily have any attacks rather than turn around, but note that it moves after attacking it's weak spot which is it's eye. Larryboy has to use his suction plunger on it to free Petunia from Bad Apple's grasp. Doing it three times will cause the Bad Apple to rise the platform to higher places.

During Pa Grape's temptation, Pa Grape spends time playing with his toys as Bad Apple watches and comments about them. When LarryBoy shows up, she challenges him to a battle where LarryBoy has to stop a toy train, if he wins then Pa Grape is free. After LarryBoy wins, Bad Apple runs off and Pa Grape is rescued from temptation. The fourth Boss is against a moving train that simply rides around the track doing nothing but spew deadly smoke across the platforms (except the center platform), LarryBoy must change from different track to catch up with it, if he activates the track switch, bombs will fall from the sky and damage him when they explode (LarryBoy must avoid this to progress deeper). One the track has been switch, LarryBoy must run up to the platform, fill the bucket with water, and pour it onto the train to slow it down and cool it's coals (Be quick, as the train will duck under the platform and spew smoke from below). Do this several times, and the train is toast.

Mr. Lunt's Temptation takes place when Mr. Lunt watches TV on his favorite show, Bad Apple comments that he is the first to watch, unfortunately for her, LarryBoy shows up. Bad Apple get enrage knowing she has had enough of LarryBoy ruining her plans, she then shows him how shocking it can get. When LarryBoy destroys the force field, She leaves after telling him that a whole town is about to be tempted by something irresistible. The fifth Boss require LarryBoy to spray the target to lift the deflector plates that will block the energy beams creating the force field (They have to be sprayed until the plates lock in place). Be warned that when the eye opens, a large attack will arrive where deadly lasers fall down and rise back up causing LarryBoy to disintegrate into ash (LarryBoy must use his S.M.A.R.T. cape to avoid being shocked). Do this four times and the boss is defeated.

Bad Apple makes one last attempt where she built Apley's Funhouse 2 as a massive amount of temptation. When LarryBoy arrives, Bad Apple tells him her plan to tempt all of Bumblyburg. LarryBoy tells her that god's promise was to not let anyone be tempted beyond what they handle, and that he'll always give them a way out! She laughs and taunts him saying that things don't look very good and that Bumblyburg chose quite a silly hero before strapping web strings all over the monument. The final boss is very puzzle based, Larry Boy must spray every web string from around Bumblyburg (when one string is broken, she will get stunned by impact from her arm). LarryBoy must slingshot and glide from a higher view to get on top of the funhouse and spray her. He will have to do this six times to defeat her once and for all. It's dangerous to get on top of the funhouse if a web isn't sprayed, as it will make LarryBoy take damage when near her.

The first boss is basically donkey kong styled where LarryBoy must make it to the top and rescue Junior Asparagus. Avoid basketballs as they will stun LarryBoy.

The second boss is basically break-out where LarryBoy must break all the Bad Apple blocks to free Alfred.

The third boss requires LarryBoy to protect Petunia from missiles (note that they will get deflected and bounce back). LarryBoy has to bounce them to the Handypads and destroy them to free Petunia.

The fourth boss is basically Pac man-ish where LarryBoy must guide Bob the tomato out of the place by switching color coded buttons to turn off colored buttons. If the Bad Apple catched Bob then he will be tempted forever, note that onions slow him down.

The final boss is basically Pong where LarryBoy must knock the ball pass the Bad Apple. If LarryBoy does this enough times, then he wins. 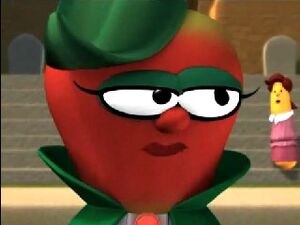 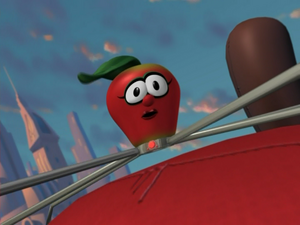