Capture all of the Master Builders in the Universe and kill the Special (abandoned).
Save the universe from being Kragle'd (succeeded).

He was voiced by Liam Neeson, who also played Ra's al Ghul in Batman Begins and The Dark Knight Rises, Norvirus Raccoon in The Nut Job, Phango in Khumba, Clinch Leatherwood in A Million Ways to Die in the West, Harry Rawlings in Widows, High-T in Men In Black: International, and himself in Family Guy.

Bad Cop works for Lord Business, being his strongest and the most ruthless henchman. He will do anything he can to help Lord Business accomplish his goal of gluing the world together with the Kragle. Throughout the movie, he is obsessed with capturing Emmet whom holds the Piece of Resistance with him.

President Business meets with Bad Cop as his alter-ego, Lord Business, in his skyscraper's relic room, which is full of non-LEGO items from a world beyond theirs- our world. Business lets it be known that he is angry that Emmet escaped with the Piece, but intends to set everything in place literally with the Kragle (which happens to be a tube of Krazy Glue with some letters rubbed off). He seeks his lieutenant's true loyalties by having him fire the weapon-turned relic onto his own parents, Ma Cop and Pa Cop, but his Good Cop side wins over. Business discovers this and rubs off that side of the officer with other powerful items (nail polish remover and a q-tip) before convincing him to demonstrate the Kragle's power.

Bad Cop tracks down Emmet, Wyldstyle, and Vitruvius in the Old West which leads to him destroying a bridge for the train they are on, but they've been rescued Batman in his Batmobile and he turn Bad Cop's car into baby carriage to losing him. Bad Cop and his "Kragle-ized" forces locate Emmet again via a tracking device shot on to him when previously saving Wyldstyle from the shot and attack and capture all the remaining Master Builders (except for Emmet and a few others who escape in a quickly-built submarine) during the attack on Cloud Cuckoo Land. Above the ocean waves, Bad Cop reports no other survivors amongst the surfacing wreckage to Lord Business—but fails to notice said survivors hiding in the only part that stayed intact: a double-decker couch that Emmet had built for the first time on his own.

Bad Cop later helps Wyldstyle and the Master Builders fight Lord Business' forces after he was abandoned by Lord Business for double-crossing him in the tower, and draws on a new Good Cop side with a marker. After the Kragle was destroyed, Bad Cop reunites with his parents.

The Lego Movie 2: The Second Part

Bad Cop, now known as Scribble Cop, is shown to be a citizen of Apocalypseburg. He has converted his police car into a post-apocalyptic cart that is carried by the Skeletrons. Emmet says good morning to him to which he growls. He then appeared in Emmet’s nightmare about Armamageddon. scribble cop can be later seen in Batman’s base.

Bad Cop dresses in the black LEGO police uniform, and also has grey hands. His head is yellow, and has double-sided printing. One side portrays his "bad" personality, and the other side portrays his "good" personality. His bad side has sunglasses with grey lenses and a determined expression. His good side has an open smile and glasses. Bad Cop also wears a black helmet.

His 71004 The LEGO Movie Series, Scribble Face Bad Cop, variant comes with a double-sided head pieces. One side shows his bad side, while the other is a scribbled good side face. He does not have details on the back of the torso, despite having them in the movie.

The set 70802 Bad Cop's Pursuit also has his Bad Cop face but with a more angry expression as well as his Good Cop expression.

In the set 70840, Bad Cop is called Scribble Cop and still retains his police uniform; however, he now wears armour plates on his shoulders.

Bad Cop is an evil cop that is loyal to President Business and does whatever he commands. In the second trailer, it is shown that Bad Cop has a second split persona named Good Cop that acts friendly, but Bad Cop likes his evil persona more, and usually has a tendency to fight between the two personas. Lord Business eventually killed his good side by rubbing it with nail polisher, but Bad Cop revived his good persona back by drawing another Good Cop face with permanent marker. 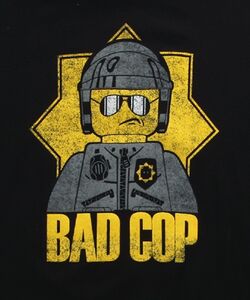 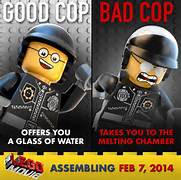 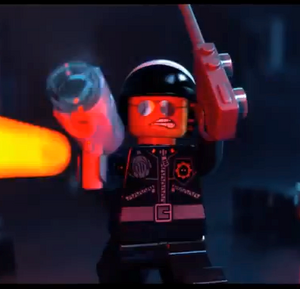 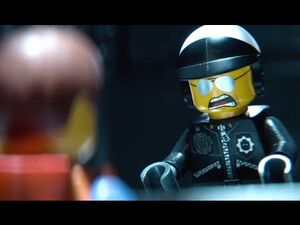 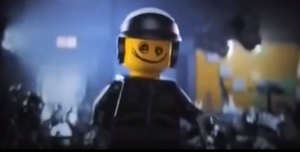 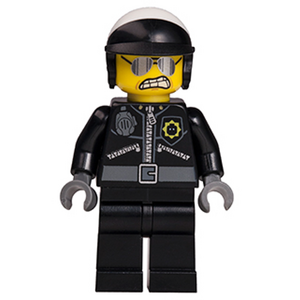 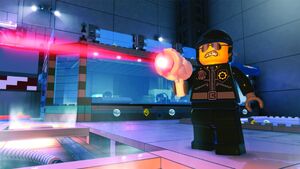 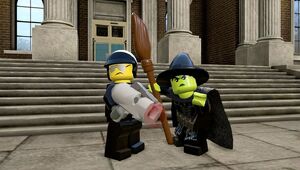 Bad Cop and the Wicked Witch of the West in Lego Dimensions. 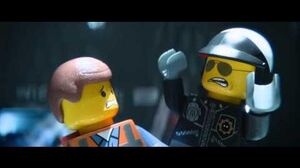 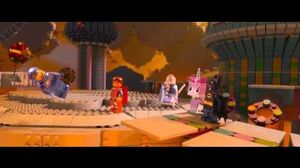