Get revenge on Clemmons (failed).

Bad Jack Cutter is the secondary antagonist of Joe Camp's 1976 slapstick film Hawmps?. He is a violent and cantankerous outlaw who wants to hang Naman Tucker. However, his plan was foiled by Howard Clemmons and Uriah Tibbs, the protagonist and deuteragonist of the film.

He was portrayed by the late Jack Elam, who would go on to play Big Mac from Disney's 1979 film The Apple Dumpling Gang Rides Again.

Clemmons learns from Corporal Leroy that Tucker and his men are captured by Cutter at Dagger's Point. Clemmons insists on rescuing Tucker and his men. Along the way, Clemmons and Tibbs capture two other outlaws, steal their clothes and horses, then ride into town in disguise to meet Bad Jack, agreeing to join his gang. Later, they find Tucker and his men in jail and try to pull out the window bars using a horse. When the horse fails, a camel demolishes the entire jail. Tucker and his men run, leaving Tibbs and Clemmons to face the outlaws alone. A gunfight ensues but Clemmons' men ride in on camelback, rescuing their leaders, and ride off before the outlaws can get to their horses.

Later, when Clemmons finds water, he is ambushed by Cutter and Valentine escapes. After sundown, the camel reaches Tibbs and his men. The men drink their fill, then realize Clemmons is missing. The next morning, Cutter realizes Clemmons is out of ammunition. He climbs down the rocks and shoots Clemmons in the chest and gloats in triumph as Tibbs aprehends him. Much to Tibbs' surprise, Clemmons is saved by the book Jennifer gave him; it was inside his jacket and stopped Cutter's bullet. Cutter is last seen waving to the crowd with Clemmons and his troop as they win the race against Tucker. 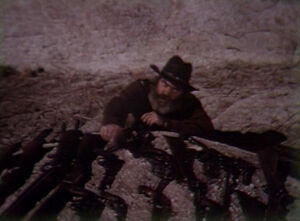 Bad Jack Cutter with his arsenal 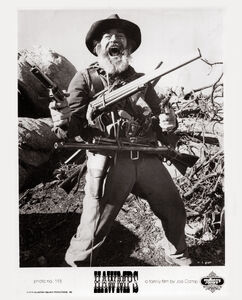 Retrieved from "https://villains.fandom.com/wiki/Bad_Jack_Cutter?oldid=3700391"
Community content is available under CC-BY-SA unless otherwise noted.