All of the previous Kamen Rider evil organizations

The Generalissimo of Badan

Conquer the world by releasing the Underworld.

The Badan Empire is an amalgamation of all of the previous Kamen Rider evil groups, wishing to complete the desire of world domination that its predecessors never obtained, and is the main antagonists of the Kamen Rider ZX special and the Kamen Rider Spirits manga, as well as the Heisei Rider vs. Showa Rider: Kamen Rider Taisen feat. Super Sentai film.

In Kamen Rider Spirits, several references infer that the Badan Empire is actually an alien race that supported terrorist groups starting with Shocker.

Birth of the 10th! Kamen Riders All Together!!

Badan was a secret organization spread out in various points around the world, related to Shocker's various incarnations, and planning to further the will of all the previous evil organizations attempts of conquering the world that they failed to accomplished.

Badan moved to Japan afterwards, pushing forward its grand scale operation, the development of the Space Break System to destroy anything without leaving behind any traces of its former existence.

Ryou Murasame/Kamen Rider ZX joined the other nine Showa Riders, and battled Badan Armies, after they destroyed Badan's Space-time Fracture System and killed Ambassador Darkness. The Generalissimo of Badan appeared as a powerful evil spirit and dark cloud with a giant skull in the skies. The Generalissimo of Badan told the 10 Kamen Riders farewell and disappeared into thin air hinting at a possible return in the future.

In an alternate timeline caused by Ankh leaving an O-Medal behind in the year 1971, Shocker conquered Japan with the Shocker Greeed. The Badan Empire itself never came to exist as an independent organization, but its cyborg Tiger-Roid was a Shocker member in this alternate timeline.

One Badan Empire cyborg, Tiger-Roid, was part of the revived Dai-Shocker assembled by Decade to wipe out the Super Sentai, ensuring the survival of the Kamen Riders. After Dai-Shocker's alliance with Dai-Zangyack was revealed, both organizations were wiped out by a gathering of Kamen Riders and Super Sentai.

After several decades, Badan reformed as an underground empire/Kingdom of The Dead. All the members from previous organizations from the past gathered and manipulated Ren Aoi, a family man who was mourning the loss of his son, Shuu Aoi, they gave him a Sengoku Driver along with the Fifteen Lockseed which turned him into Kamen Rider Fifteen, one of Badan Empire's top enforcers with the Heisei Rider Lockseed that granted him the powers of all of the 15 main Heisei Riders. Ren Aoi now known as Kamen Rider Fifteen, was more powerful then any other rider using the armor of the 15 Heisei riders he was stronger than Kamen Rider Decade the Destroyer of Worlds and the former leader of Dai-Shocker.

Mogura-Roid and Fifteen were sent to the surface world of, Zawame City. Their mission was to bring Badan Kaijin to the surface world and conquer the city for the empire. When they began however their plans were stopped by the ToQgers, Armor Riders, and Showa Riders. Mogura-Roid squad was defeated by the Armored Riders while Fifteen managed to escape before being defeated by the ToQgers and Showa Riders.

Shu Aoi managed to escape from the underground empire of the dead when he met Kouta Kazuraba and Mai Takatsukasa, whom happened to be inside the Earth as they were investigating the recent events going on. Kouta and Mai wanted to help Shu when Combat-Roids caught up to them. However Takeshi Hongo/Kamen Rider 1 arrived and defeated the forces as Shu managed to use his power to reverse to surface and escape from the Combat-Roids. Following that Yamaarashi-Roid, Tiger-roid, and Ren launched their army in a full-scale invasion of the surface to kidnap Shu. They were stopped though by Armored Riders who appeared to fight the Badan Kaijin army. After the battle against the armored riders who were defeated by Fifteen and the Kaijin, Ren Aoi, Yamaarashi-Roid, Tiger-Roid, and General Jark were sent to search for Shu and destroy the Heisei and Showa Riders. After they captured Shu, at the cost of Tiger-Roid and General Jark who both were defeated. They connected Shu to the Space Break System, And waited for their plan to unfold as the Showa and Heisei Riders fought and defeated each other. General Schwarz from the Shadow Line appeared to lend his forces to the Badan Empire as long as their plan involved bathing the Earth with darkness. As General Schwarz sent a Kuliner to eliminate the Den Liner and Kamen Rider Den-O. Badan’s Leader began to arise with The Mega Machine Reverse to the surface of the living world. However Ambassador Darkness revealed his true form, Ryo Murasame/Kamen Rider ZX, who secretly infiltrated the organization to discover their plans, but The Generalissimo of Badan anticipated this and the true Mega Machine Reverse is in fact Badan’s space ship base. Shortly their after believing to have won against the Riders, Ryo revealed that the other Kamen Riders that have supposedly been defeated had in fact been sent to the Helheim Forest and they were all waiting to be summoned back to Zawame City. While the Kamen Riders battled the Badan army they also began trying to destroy the Mega Machine Reverse. The Generalissimo of Badan appeared in his true form that of a giant T-Rex. Kyoryu Red and ToQgers came to assistance of the Riders. Kyoryu Red, ToQgers and Den-O combined their forces to destroy Generalissimo of Badan and Gaim used the Showa Rider Lockseed to defeat Fifteen and returned Ren back to his true self. In the end, all of Badan’s forces were eliminated and the Mega Machine Reverse was destroyed by the Riders.

The Combat-Roids are the faceless footsoldiers of the Badan Empire. They are humans that have been mechanized and converted into obedient soldiers of Badan, possessing strength that is several times higher than can be attained by a regular human. They typically fight hand-to-hand, though some wield small swords.

The Badan-Roids, often shortened to just "Roids", are elite members of the Badan Empire who have undergone the procedure to be converted into a cyborg mutant. Each possesses superhuman capabilities on account of various mechanical and biological modifications made to their body during remodeling process. Similar to early Showa kaijin, the Badan-Roids are all themed after a specific animal. They typically lead Badan soldiers in operations on the field or act as shock troops to battle and suppress the Kamen Riders.

The Badan Reversal Machine was a machine developed by Badan in the 21st century, after spending decades underground building up their forces. Badan, which by that point had become an underworld empire with control of the land of the dead itself, constructed the machine to use to flip the lands of the living and the dead, allowing Badan and their undead army of past foes of the Kamen Riders to take over the surface of the Earth while the living suffered in the underworld.

The power source of the Reversal Machine was Shu Aoi, a young boy was untimely death in a car accident and vast imagination had left him with the power to bridge the worlds of the living and the dead. Against his wishes, Shu was forced to power the machine by his father, Ren Aoi, who hoped to use it to bring him back to life. 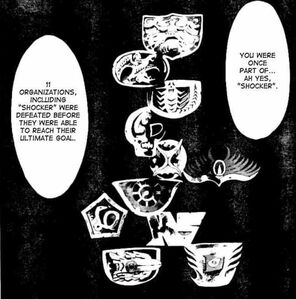 Baddies that all came and went before Badan 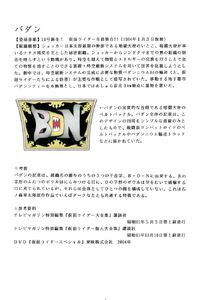 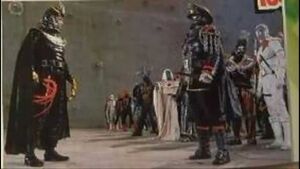 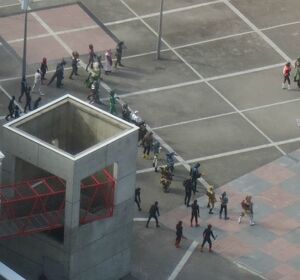 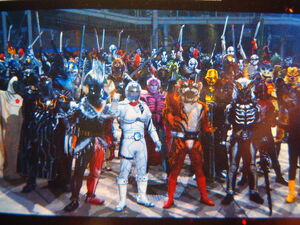 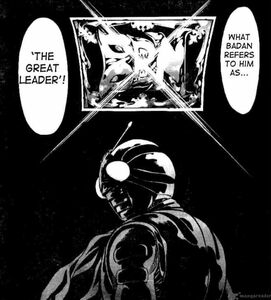