Convince Madeline to give up on her attempt to climb Celeste Mountain (formerly, failed).

Badeline, also known as Part of You and Part of Me, is the main antagonist turned deuteragonist of the indie platformer Celeste. Possibly created by the magic behind Celeste Mountain, she is Madeline's negative emotions personified.

Badeline first appears in the second chapter of the game, inside her dreams. Breaking out of a mirror, she at first attempts to talk Madeline out of continuing her adventure, but when she denies this, she chases after Madeline to stop her herself. After stopping suddenly, she reappears as Madeline attempts to pick up a phone call in her dream, she appears once more to tell her to give up, before Madeline awakens from her slumber.

She next appears in the third chapter, telling the honest truth to Mr. Oshiro, being that his hotel is in an awful state and no one would want to head there, causing him to chase Madeline down in an attempt to both get her to leave his sight.

After this, she appears in the fourth chapter to try and use Madeline's fear of heights against her. However, with the help of Theo and his feather technique, Madeline calms down enough to carry on.

In the game's fifth chapter, Badeline appears inside the Mirror Temple to explain it's purpose and that it increases her power.

The conflict between the two reaches a head in the sixth chapter, with Badeline trying to convince Madeline to at last quit her journey and head back home. However, when Madeline both denies this and tries to reason with her double to leave her alone, this enrages Badeline. Fearing that Madeline would leave her on the mountain to rot, she at last has some of her success, having Madeline fall victim to her insecurities, rip the feather to pieces, and using a tendril, sending Madeline down the mountainside. Although Madeline begins to lose her hope, Granny manages to convince her to talk to Badeline over these issues. Although Badeline at first doesn't believe her apologies (causing a boss fight in the progress), she comes to her senses by Madeline convincing her that if they want to climb the mountain, they need to work together and it's fine to not feel alright at times. This is enough for Badeline to change her tune, now helping Madeline climb the mountain, and succeeding in this task in the seventh chapter.

Badeline makes an additional appearance in the ninth and last chapter, trying to get Madeline to not chase after the Bird, deeming it unimportant, only for Madeline to not completely deny her, eventually freeing the animal from an electric cage.

Alongside Madeline, Badeline appears as a playable character in the Nintendo Switch version of TowerFall.

Badeline looks nearly identically to Madeline, barring some color differences. Her jacket, pants, shoes, and long hair are various shades of purple, her skin is a pale gray, and her eyes a shade of red.

Although calling herself the logical side of Madeline, Badeline is controlling, manipulative, and aggressive. Throughout her appearances before her redemption, she tries repeatedly to have Madeline give up on her journey and return home, regardless of it psychologically abusing her or causing others to become aggressive towards her. She also has an aggressive streak, directly confronting Madeline in Chapter 6 in both aggressively talking down to her and fighting against her herself. These traits likely stem from her own insecurities, not wanting to left alone on the mountain by Madeline. Badeline also prefers to deal with issues quickly without mistakes, dislikes being blamed, and knows much about the mountain. 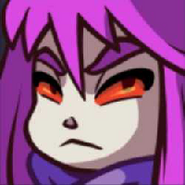 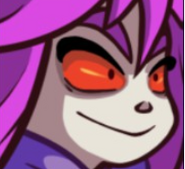 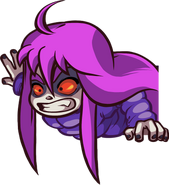 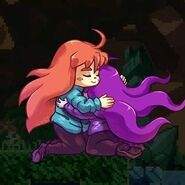 Madeline and Badeline completing their journey.

An official plush of Badeline.

Badeline on the cover of the official piano collection book for Celeste.
Add a photo to this gallery

Retrieved from "https://villains.fandom.com/wiki/Badeline?oldid=4075799"
Community content is available under CC-BY-SA unless otherwise noted.