The Tyrant
Lord of Marshank
That Cruel Cowardly Heartless Vermin

The Sword of Luke the Warrior

Finish building his fortress and rule over the seas.

Tyrannical Rival
Badrang the Tyrant (simply known as Badrang) is an anthropomorphic stoat and the main villain of the book, Martin the Warrior by Brian Jacques, as well as the third season of the Redwall TV series.

Badrang was a former corsair who settled on the coast, and with help from his army of rats, weasels, ferrets and foxes, gathered slaves to build him a fortress made of wood and stone. He named it Marshank, and made it his goal to become ultimate lord of the northern coast. He thought his species to be superior to all others, and thus had no other stoats in his horde.

Badrang made a mortal enemy in the young mouse Martin when he took him as a slave, stole his father's sword, and threw him into the prison death pit. Martin escaped, however, and returned with an army to attack Marshank and free the slaves. In the final battle, Badrang killed Martin's love, Rose, and after a fierce duel, Badrang was slain by Martin with his sword. Marshank was then burned to the ground.

Badrang was egotistical, crafty, and ruthless, letting nothing get in his way of conquest and even killing his own followers. A former ally of his, another corsair stoat, Cap'n Tramun Clogg, played an important role in the story as well. They both hated each other, but with a 'friendly' hatred, as they quarreled and insulted each other a lot. At one point, Clogg tried to break down the Marshank door with a battering ram. Badrang returned fire literally, burning Clogg's ship, the Seascarab, to the ground. They had also plotted assassination attempts against each other, but both failed. Clogg eventually went insane and Badrang kept him as a slave. After Badrang died, Clogg rambled on insanely about burying him. 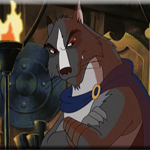 Badrang as he appears in the Redwall TV series.