Morae
The Monster
The Devil
Boss

I Don't Want This Kind of Hero

Baekmorae (In Korean: 백모래, Baekmorae) is the main antagonist of korean webtoon, I Don't Want This Kind of Hero.

He is the source of the evil of this webtoon, and his white hair and eyes are covered with white bandages, and his clothes and shoes are white, and his whole body is painted white.

Because of the bandages he closed his eyes, his face was not revealed, giving off a mysterious atmosphere, but the impression when he removed the bandages was very gentle, not like a villain boss, with drooping eyes + orange eyes.

He is a beautiful, handsome character with white skin like white jade and bright eyes like amber. The outfit is neat and neat.

Baekmorae is sadistic, obsessed, cruel, and has a trait to kill offenders right away. He is an object to be really careful about because he can't tell what he thinks as a random human being, and because he does whatever he wants. The reason he murders is to satisfy his greed, so it can be said that it is a good example of an adult who has not grown mentally and remains a cruel child, and a device that shows that he is a psychopath without filtering.

However, despite this cruel personality, he shows a subtly natural aspect, but if he really betrays him, he also has the heartless side of killing the betrayed subordinate immediately. And he hates to promote hero power-ups, so he has a strict rule that he should not touch the hero's family or lover, and whenever he comes out strangely, he is always beaten by someone.

In the past, he lost all his parents and grew up in an orphanage, but thanks to the director's warm care and well-being hometown city, he lived a very normal and warm life among good people. The misfortune begins when Lee Ho appears in the orphanage where Baekmorae grew up and seeks the director. He was the doctor who sponsored the orphanage. At this time, he called Lee Ho 'teacher'.

Baekmorae wondered about Lee Ho, who was unfamiliar with humans, but made friends by thinking he was grateful. And, along with another friend of the orphanage, the grown-up Baekmorae finds a job at the doctor's medical laboratory who sponsored them, just like Lee Ho, and becomes Lee Ho and a senior and younger.

In fact, Lee Ho and the warden were co-founders, rather than a parent-child relationship. However, the director said that Lee Ho was immortal but too weak, and made a plan to make the Baekmorae a perfect human who ignores any pathogens and strong powers, and the relationship with Lee Ho, who sincerely cherished the Baekmorae, was broken. The reason Lee Ho called Baekmorae to the institute was because he and his older brother Ll-ho wanted children. However, after the Baekmorae fell into a test subject, he was afraid of being hated even though he regretted his actions.

One day, however, a cat girl appears and sees him killing the warden with a knife, when Baekmorae sees himself rejoicing after the death of his gift, and fears the appearance of himself losing personality. Baekmorae instincts that he's going crazy and tries to commit suicide, but the Raptor stops it and everyone will do it, and he tells us not to die, as it's going to happen as joy as today. As a result of this, he fell in love with the raptor and at the same time lost his last humanity and awakened as a monster. As soon as he awakened as a killer, the first thing he did was to kill all the humans in the laboratory as well as the researchers who were in the same situation as him. While walking around the lab, thinking they all killed them, they luckily survived and found two of the last survivors who were hiding. These two are Medusa and Orca, who are now Baekmorae's men. In order to achieve his grand ambition, Baekmorae will save the two of them, so he proposes to follow him. But that ambition is to love as shown in the upper dialogue window. 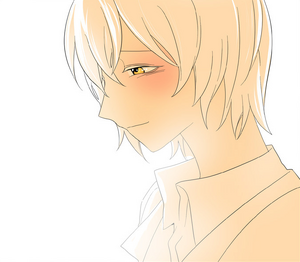 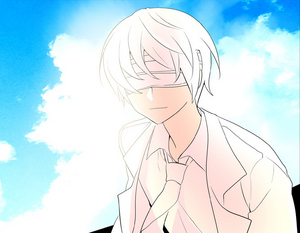 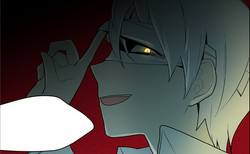 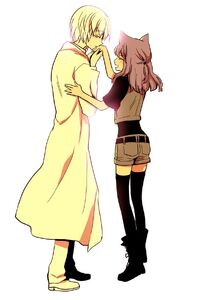 Morae and Raptor
Community content is available under CC-BY-SA unless otherwise noted.