The God of War

Destroy the Starscourge (formerly a noble goal, but then chose to use villainous methods (succeeded by proxy in both timelines)).

Destroy humanity (failed).
Eliminate the Lucians and Oracles (succeeded at first in the original timeline, but then fails in a new timeline).
Maintain his rule over Eos (failed in new timeline).

Bahamut is the overarching antagonist in Final Fantasy XV. He first appears to be an ally of Noctis Lucis Caelum in the base storyline of Final Fantasy XV, but is soon revealed to be the true villain of the game's expanded universe.

He is one of the Six Astrals of Eos, representing as the God of War and is perhaps the most powerful among them, as well as the most mysterious one. He is also responsible for bestowing his powers onto the Oracle, as well as entrusting the Ring of Lucii and the Crystal to them in hopes of them to find the True King. Like the other Astrals, he is bound to protecting Eos, but he believes that sacrifices must be made for life to flourish.

In contrast to many of Bahamut's appearances in other Final Fantasy games, Bahamut is depicted as a humanoid figure wearing metallic armor reminiscence that to a dragon, similar to the traditional dragoon armor set found in different games. He also has a tail, which is plated with the same metallic armor, as well as red ribbons attached to his back. He also has wings, which are actually made up of his swords. When Bahamut uses attacks such as Megaflare, his swords separate from his back and form around each other in a circle.

He possess a human-like face structure underneath his helmet that covers his face, with the exception of his eyes, though it can be difficult to see from certain angles, due to the top of his helmet hiding it. Underneath his helmet, he possesses a face identical to Noctis and Somnus.

Bahamut is/was protective of the planet, but possesses a ruthless streak, as more clearly evidenced in the bonus content added after release: Final Fantasy XV: Comrades, Final Fantasy XV: Episode Ardyn and Final Fantasy XV -The Dawn Of The Future-. The content released after the main game reveals him to be uncaring toward the individuals who are to play a part in the fate he has spelled for the planet. His attitude in both the main game and additional content paint him as borderline fatalistic in his dismissal of an alternate solution to destroying the Scourge, to the point of an unhealthy obsession that is most fully expressed in The Dawn of the Future, where he completely abandons the salvation of Eos. Bahamut deems humanity inherently foolish without admitting his own horiffic actions or his responsibility for the events that caused such "foolishness" on their end, considering them of no more value to him than flowers; worthy of cultivation if healthy, yet perfectly willing to exterminate them all if diseased, even those that really aren't.

Bahamut and the Astrals have ruled over Eos since before the beginning of time. After the nation of Solheim turned on the gods, triggering the War of the Astrals that spread the Starscourge, Bahamut wanted to destroy the planet without considering another, morally acceptable solution, showing his first signs that he is either already evil, or at least on his way to becoming as such. With the other gods exhausting themselves to stop his Terra Flare from destroying Eos, Bahamut was able to keep his attempted genocide unknown to man, both by erasing or manipulating the other Astrals' memories as they slept, and by ordering that the Cosmogony books omit any mention of his shameful actions, and then he chose to manipulate two bloodlines to their deaths, all to eliminate the threat he should have dealt with more ethically without regard for his own wellbeing.

Though his plan came to fruition (in the game's initial ending) at the expense of an uncountable number of lives, including all the Lucian Kings and Oracles, a newly revealed/created timeline is soon shown where Noctis learns the truth of Bahamut, who revived Lunafreya to gather the darkness for Bahamut to use Terra Flare again, which is again thwarted by the other Astrals, including a newly purified Ifrit. Noctis then cooperates with Ardyn to destroy Bahamut in both the physical and spiritual planes, which makes the other Astrals and all magic disappear from Eos forever, but the Crystal absorbs all that remains of the Starscourge before shattering, saving the planet at last. 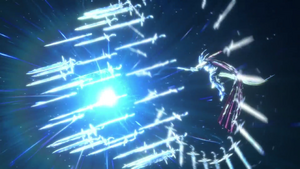 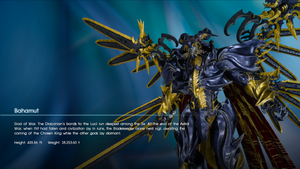 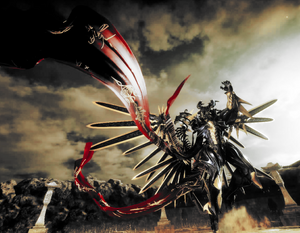 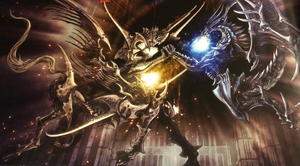 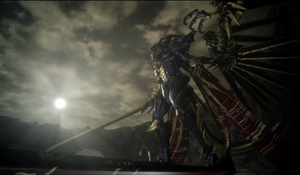 Retrieved from "https://villains.fandom.com/wiki/Bahamut_(Final_Fantasy_XV)?oldid=4092223"
Community content is available under CC-BY-SA unless otherwise noted.