Each members and organizations possess their own deadly magics and sorceries

Destroy Fairy Tail, other than that minding their own business,

The Balam Alliance was an alliance comprised of various dark guilds and appeared as the primary antagonists for much of the anime/manga series Fairy Tail. It was made up of three dark guilds, Grimoire Heart, Tartaros, and the Oración Seis which were the most powerful Dark Guilds in all of Fiore. Their combined strength had allowed them to control virtually every other minor dark guild with the exception of Raven Tail and all three of the main guilds went to war with Fairy Tail. The war between the alliance and Fairy Tail however, ended with Fairy Tail ultimately winning and the alliance had effectivly dissolved by the year X792.

The Balam Alliance was an alliance of three of the most powerful dark guilds and was formed sometime before the year X784. The alliance however, was nothing more but a non-aggression pact as the three guilds had never at once interacted with each other and simply stuck to their subordinate guilds. The alliance itself had all the three main guilds act on their own and they each started their own individual war with Fairy Tail and none of them every came to help the other. Each of the three guilds also had various subordinate guilds under their control and often times they would send them to do some dirty work for them.

The Balam Alliance was one of the most powerful organizations in all of Fiore. It was comprised of the three most powerful Dark Guilds all of them of which, had some of the most powerful Dark Mages and many powerful spells as well. The Oracion Seis had all six of their members be some of the most strongest in the land, Grimoire Heart had a large airship and Grimoire Law, their version to that of Fairy Law used by the Fairy Tail guild, and Tartaros with various demons being virtually all of the guild's members. The Balam Alliance also had access to the Books of Zeref due to Tartaros being a member of the alliance and gained access to some of the most powerful of demons. In the year X791 however, the alliance had suffered heavy losses and thus, was sevearly weakened to the point where the Magic Council was ready to finish them off had Jackal not gone in and killed them all. The weakening in power stemmed from the fact that two of the three main guilds were disbanded and most of the subordinate guilds were destroyed as well. Following the guild was between Tartaros and Fairy Tail, both guilds were destroyed and the alliance was finished with the organization having been disbanded by the year X792. 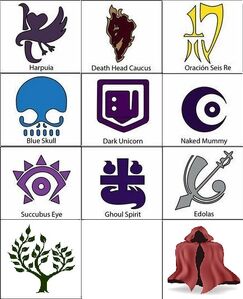