The Bald Eagle is a Mewnian eagle that becomes one of Ludo's pets in season 2 of "Star vs. the Forces of Evil."

Eagle is first seen in "Ludo in the Wild" feeding her babies. When Ludo tries to get some she grabs him a drops him off in the middle of the forest. She was later captured by Ludo and a Giant Spider. The three later bond, then Ludo has a vision of Star and chases after her which leads him to a new wand.

In "Wand to Wand" Ludo, Spider, and Eagle go to a bar full of rats to get some porch but get a bowl of mud instead. Ludo tries to use his wand but gets thrown out along with his pets. After some brief training Ludo discovers the wand works when he is angry. So, Ludo and his pets fight and defeat the rats. Which make them serve him.

Eagle appears with Ludo and Spider at the end of "On The Job" Watching as the rats bring in more corn.

In "By the Book" Spider and Eagle watch Ludo in confusion when he state the wand is talking to him. They accompany him to earth to face off Star. Spider and Eagle fight Marco while Ludo fight Star. They retreat with Ludo happy to know the there is a book for the wand.

In "Is Mystery" Ludo, Spider, and Eagle confront Buff Frog with Ludo offering him to rejoin his army. This results in Buff Frog punching Ludo in the face. They attack him but Buff Frog manages to escape.

Ludo, Spider, Eagle, and the rats appear near the end of "Bon Bon the Birthday Clown" with Ludo disguise as Bon Bon. They attack Star and Janna until they steal the Magic instructions book and Glossaryk.

In "The Hard Way" Spider and Eagle guard Glossaryks room until Ludo lets him go. They bring the book of spells so Glossaryk can teach Ludo how to use his wand.

In "Starcrushed" Eagle is feeding Spider insects from her mouth until the commission arrives. They attack until Hekapoo uses her dimensional scissors to transport them to a Mexican fast food restaurant.

In "Ludo, Where Art Thou?" Eagle and Spider are revealed to be secretly living with Ludo's brother Dennis. 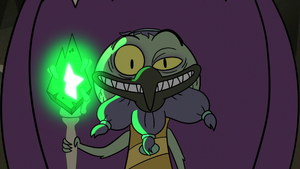 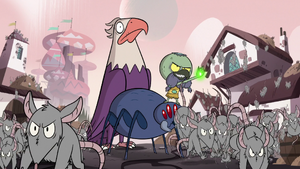