To find the bank that he and the witch stole.

The Bald Zomble is a recurring antagonist in the Scooby-Doo franchise. He originally appeared in the original animated series and showing up as a cameo in later series and films. There have been multiple zombies and zombie costumes in Scooby-Doo, but this one is the most well-known.

The Zombie has a pale complexion, pointed ears, and blood-red eyes. His clothing is tattered and ragged. In the original series he appears lean and lanky, while in the live-action films he seems to be more brutish and hulking.

The Zombie's entire personality is calculated to scare people away from the surrounding area;  a stereotypical zombie figure, he is ghoulish and mute, shuffling around in a menacing manner.  Although the person inside the Zombie outfit is intellingent and calculating, the Zombie itself is acted to appear dimwitted and slow, under the service of the Witch. In the live-action version, the Zombie is alive instead of being a man in a costume;  he appears manic and mischievious, laughing after vomiting on people and attempting to drive a truck.

He first appeared in the Scooby-Doo, Where Are You? episode Which Witch is Which? as the secondary antagonist. Although seemingly the menacing henchman of a swamp witch, in reality the Zombie was the disguise of a man named Zeb. He and his partner Zeke (who dressed up as the Witch) used the costumes to scare away intruders as they searched for a submerged armored bank truck that they had stolen and hidden somewhere into the swamp.

On the The Scooby-Doo Show Episode, Mamba Wamba and The Hoodoo Voodoo, Mamba Wamba has a zombie similar to this one.  However, the Mamba zombie is paler with a stockier build, and has black eyes.

The Zombie is a common villain in the 2002 videogame Scooby-Doo! Night of 100 Frights brought back by the Mastermind. The Witch in her original appearance also appears in this game.

The Zombie was one of the secondary antagonists of the 2004 live-action movie, Scooby-Doo 2: Monsters Unleashed.  It was a costume at the Coolsonian Criminology Museum, and was stolen off-screen. The Zombie was later found in the Monster Hive where he was accidentally brought to life by Scooby and Shaggy, along with The Miner 49er, The Ghost of Captain Cutler, and The Tar Monster.

The Zombie  goes on a rampage through the city with Pterodactyl Ghost, and is picked up on a live news feed.  The news reporter ask The Zombie if he has anything to say for himself, and the Zombie vomits green slime at the news reporter and laughs.

The Zombie along with Miner 49er, the Skeleton Men, and the Tar Monster are then ordered by the Masked Figure to return to the Monster Hive to stop Scooby-Doo and the gang.  Scooby-Doo distracts the Zombie by pulling down the Zombie's pants, and he turns to dust after the machine is reactivated.  It is unknown if the Zombie costume was returned to the Coolsonian Criminology Museum.

He is also in the videogame based on Monsters Unleashed.

He can be seen on the Gamecube, PlayStation 2 and Xbox versions of the Haunted House level in the 2005 videogame Scooby-Doo! Unmasked as a painting.

He appears in the DS version of the 2006 videogame Scooby-Doo! Who's Watching Who?.

He make a cameo during the end of the 2010 live action movie, Scooby-Doo! Curse of The Lake Monster.

The Zombie makes a cameo appearance in the opening credits of the 2013 Scooby-Doo! Mask of The Blue Falcon where Daphne kicks him in the face.

The Zombie was in the 2014 movie Scooby-Doo! Frankencreepy.

The Zombie appeared in the 2016 movie LEGO Scooby-Doo! Haunted Hollywood.

His most recent appearance in the Scooby-Doo franchise was the film LEGO Scooby-Doo! Blowout Beach Bash.

There is an action figure and a Lego minifigure of the zombie. 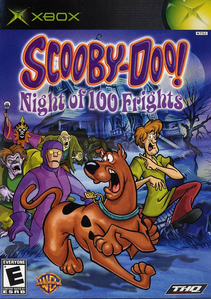 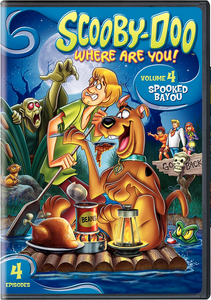 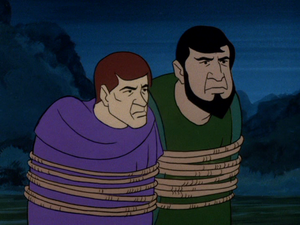 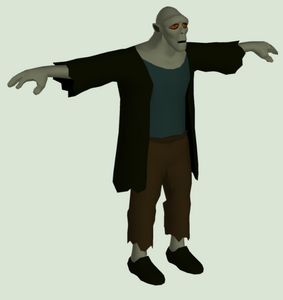