Villains Wiki
Register
Don't have an account?
Sign In
Advertisement
in: Articles under construction, Article stubs, DC Villains,
and 11 more

Teen Titans Go! to the Movies

The Balloon Man is a minor antagonist in Teen Titans Go! to the Movies. He is a giant robot made out of balloons, who destroyed Jump City.

He was voiced by Greg Davies, who also played King Hydroflax in Doctor Who and Mr. Gilbert in The Inbetweeners.

In "Teen Titans Go! to the Movies", the Balloon Man destroyed Jump City, when the Teen Titans came in to stop him. The Teen Titans fought him for a bit but did minimal damage to him, with their biggest act of harm just being popping one of his buttcheeks open, causing him to fart a bunch of helium all over Jump City. In the middle of their fight, the Teen Titans performed a song and dance, where they sang a song to the Balloon Man. The Balloon Man saw this as ridiculous and just rolled his eyes and left to go destroy the city some more and get defeated by some real superheroes. The Justice League, which consisted of Superman, Wonder Woman, and The Green Lantern, all attacked the Balloon Man and defeated him. The Teen Titans didn't even notice that their glory had been stolen until after the deed was done. 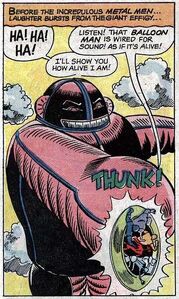 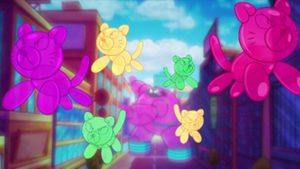