Escape from Circus Baby's Entertainment and Rental (succeeded).
Force Kasey to return the glasses she stole to its true owner (presumably in the books; succeeded).

Ballora the Ballerina, better known simply as Ballora, is a major antagonist in the Five Nights at Freddy's franchise.

She is a humanoid animatronic ballerina and part of the "Funtime" series of animatronics created by William Afton to kidnap and murder children for him. Originally the main attraction of the Ballora Gallery in Circus Baby's Pizza World, Ballora and the other Funtime animatronics escaped the facility by fusing into Ennard. She and the rest of the Funtime animatronics were destroyed at the end of Freddy Fazbear's Pizzeria Simulator. In Five Nights at Freddy's AR: Special Delivery, she has two skins known as Arctic Ballora and Clockwork Ballora respectfully.

She is voiced by Michella Moss.

The Player is introduced to Ballora, along with Funtime Foxy and Circus Baby, starting on Night 1 via Handunit. Handunit describes Ballora as a kind and child-friendly animatronic who encourages children to exercise as well as eat pizza. The player is instructed by Handunit to check on Ballora using the light on the left side of the office the player is in. Once the player cannot see Ballora, Handunit informs them that in order for Ballora to come out of hiding the player must administer a controlled shock to Ballora to get her attention. After the player uses a controlled shock, they check on Ballora again using the light as instructed by Handunit. Once Ballora is visible, Handunit informs the player that all is well in Ballora Gallery and the player proceeds to check on the other animatronics.

The player, as instructed by Handunit (this time with the "Angsty Teen" voice) once again, checks on Ballora using the light on the left side of the office. Just like in Night 1, Ballora won't be there and the player must use another controlled shock to bring her back to the stage. Once Ballora is on the stage again, the "Angsty Teen" voice will malfunction and Handunit's original voice will return to normal. After the player checks on the other animatronics, the player will have to head toward the Breaker Room to restart the power manually, due to the power having gone out. To reach the Breaker Room, the player will have to trek through Ballora Gallery with Ballora attempting to kill the player should she manage to catch them. To make it through Ballora Gallery without Ballora being able to catch the player, the latter must not make any noise while Ballora is near. One would know that Ballora is close by if they were to hear Ballora's music. The louder Ballora's theme song is, the closer in proximity to the player she is. Should Ballora catch the player however, the former would kill the latter resulting in a game over.

Ballora is only seen during the beginning of Night 3, once Handunit instructs the player to check on her using the light as usual. Despite the fact that Ballora is deconstructed and being held piece by piece by her Minireenas, the Minireenas holding Ballora's parts are on Ballora's stage so Handunit doesn't suspect anything is wrong when you check on her, since technically she is on stage.

When the player is captured by Funtime Foxy and taken to the scooping room, one would be able to see Ballora get her insides scooped out, which explains why her Minireenas attack you during Night 4 instead of Ballora herself.

During Night 5, Ennard claims to be Ballora attempting to kill the player when Circus Baby is guiding the player to the Scooping Room. It is later revealed that Ennard was lying about being Ballora, and that Ballora had in fact been sent to the Scooping Room and gotten deconstructed to form Ennard, not unlike the rest of the animatronics, before the player had arrived to attempt to fix Circus Baby. Ballora's insides are fused together along with Funtime Freddy (and the Bonnie hand puppet), Funtime Foxy, and Circus Baby to ultimately create Ennard. Hence why in the Scooping Room one would be able to see Ballora's empty animatronic husk along with the rest of the other animatronic's former shells. Ennard gets scooped inside of the player, presumably bestowing Ballora's eyes.

After the player enters the private room, against Circus Baby/Ennard's orders, the latter begins to pursue the former. It is revealed at this point that all of the animatronics formed together to get scooped inside of the player so that they could escape the pizzeria. After the player survives to 6:00 am, they get rescued by the cleanup crew and are able to go home. However, Ennard somehow manages to follow the player home, leaving the latter's fate unknown.

Ballora returns as a customizable animatronic enemy in the Custom Night update for Five Nights at Freddy's: Sister Location. If one were to play a preset with her active in the custom night, she would attack the player from either the right or left side of the office. In order for one to defend themself against Ballora under these circumstances, they would have to listen carefully. Once her music is heard from either side, the player would have to close the respective door from which side the music was heard. Once certain presets with her active are successfully completed, she will ask you to save her a dance for another day.

While Ballora herself doesn't appear in this game, she returns as part of Ennard now under the alias of Molten Freddy. During the completion ending of Pizzeria Simulator, Molten Freddy is destroyed with all of the souls inhabiting the sister location animatronics being set free, destroying Ballora.

Ballora returns in the Ultimate Custom Night as a customizable animatronic enemy. She behaves mostly like she does in sister location custom night, however one would have to listen with especial caution, because she now disables all of the cameras and flickers the lights of the office before she prepares to attack.

Ballora comes back in this game as an animatronic of the Fazbear Funtime Service. However, she behaves much differently compared to every other animatronic. When an encounter with her is triggered, the shock button will be replaced by two meters. One of them shows how close Ballora is to the player, the other one how much noise the player is making. If either meter is completely filled up, her jumpscare will be triggered. The only way to deactivate Ballora is by collecting all of the Minireenas that spawn with her.

Ballora appears in one of Stanley's nightmares in the story Room for One More. She's dressed as a nurse and she forces Stanley, who's bond to a dentist's chair, to keep his mouth opened. Since Stanley had never seen Ballora before, it's possible this dream has a paranormal reason.

Ballora is the main antagonist of the story Dance with Me. Kasey starts seeing her after trying some weird novelty glasses she found in a bag stolen from a mother who just came out of Circus Baby's Pizza World. At first, she sees the ballerina dancing and spinning far away from her, and she thinks she's just an hologram projected by the glasses. However, she later realizes that other people (such as her friends Jack and AJ) aren't able to see her, and that Ballora seems to influence the elements around her, and therefore, she's real.

In addition to it, the ballerina seems to go nearer to her anytime she commits a crime. Scared, Kasey decides to escape in another city, thinking Ballora will not find her there. But the animatronic reappears after she robs a dress that she uses to appear presentable at the job interview she wants to do to find a real job, and now she's right behind Kasey.

The girl decides to fix the problem by coming back to the mother she took the bag from, and returning the glasses. The woman decides to forgive her, and she invites her inside her house. Here, the woman's daughter, Isabella, wears the glasses and she starts seeing Ballora and dancing with her.

Ballora is a humanoid ballerina animatronic. She has a curved body, white skin, large eyelashes, blue hair and very sharp teeth. Like the Toy Animatronics, she also has blushed cheeks.

She has purple lipstick, black eyeshadow, and yellow ball earrings. She wears a blue and white leotard, a magenta tutu, with yellow balls sticking out from the edge, and blue ballet slippers. She always has her eyes closed, except in her jumpscare, when her eyes open. Ballora's eyes are purple. Like the other animatronics in Five Night's at Freddy's: Sister Location, Ballora's endoskeleton consists of a combination of both robotic parts and thick, metal, tube-like wires that are arranged to kill what almost looks like a layer of muscle tissue.

As Arctic Ballora, her body is changed to be made out of ice, with numerous icicles across her body (with a large set of them on her head, chest, and pelvis to make a mock crown, frill, and skirt respectively), pink make-up on her face and chest, and blue marks on her cheeks.

As Clockwork Ballora, her body is changed to be covered in or made out of golden gears, with several larger ones appearing on her head, her shoulders, a huge one around her waist (forming a mock tutu), and joints. Pieces of her limbs, head and face, pelvis, and torso, meanwhile, are a brownish-black color with small gears marked on. 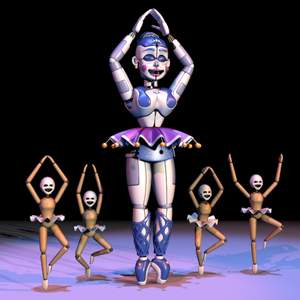 Ballora on stage with the Minireenas. 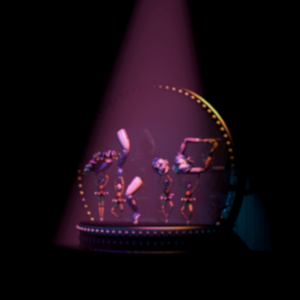 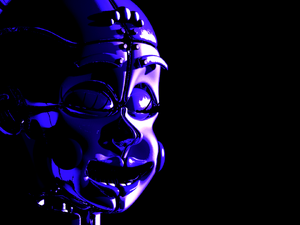 Ballora from the main menu screen. 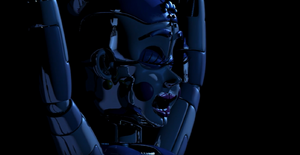 Ballora in the teaser trailer for Five Nights at Freddy's: Sister Location.

Ballora twirling in the Ballora Gallery. 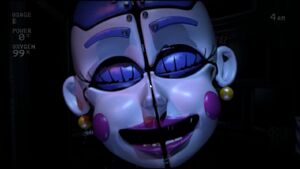 Ballora killing the player in the custom night mode for Five Nights at Freddy's: Sister Location 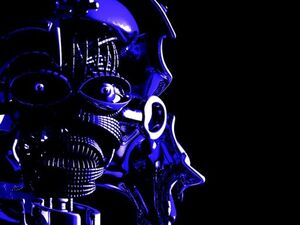 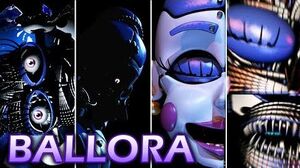 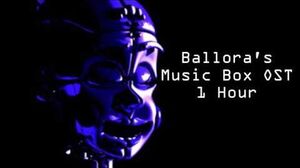