Stability
Dancing
Seeing in the dark

Ballora is one of the secondary antagonists of Five Nights at Freddy's: Sister Location.

Ballora is a humanoid ballerina Animatronic, she has a curved body and white skin. She has large eyelashes, blue hair and very sharp teeth. Like the Toy Animatronics, she also has blushed cheeks. She has lipstick, eyeshadow and yellow ball earrings.

She wears a blue and white leotard, a magenta tutu, with yellow balls sticking out from the edge, and blue ballet slippers. She has always has her eyes closed, except in her jumpscare, when her eyes open. Ballora's eyes are purple.

Like the other animatronics in Sister Location, Ballora's endoskeleton consists of a combination of both robotic parts and thick, metal, tube-like wires that are arranged to kill what almost looks like a layer of muscle tissue.

During Night 5 Ennard claims to be Ballora attempting to kill the player when Circus Baby is guiding the player to the Scooping Room, it is later revealed that Ennard was lying about Ballora and that she had been scooped along with the other animatronics before the player had arrived at the location.

Ballora on stage with the Minireenas. 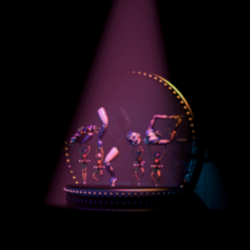 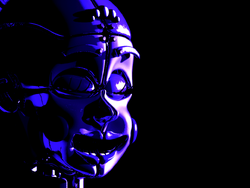 Ballora from the main menu screen.

Ballora in the teaser trailer.

Balloria scooped body parts
Add a photo to this gallery

Retrieved from "https://villains.fandom.com/wiki/Ballora?oldid=2808921"
Community content is available under CC-BY-SA unless otherwise noted.