Lord of the Risen

Former leader of the Scarlet Crusade

Leader of the Risen

Use the Scarlet Crusade to further the Burning Legion's goals

Balnazzar is one of the last of the dread lords and was under the guise of Saidan Dathrohan, Grand Crusader of the Scarlet Crusade.

Balnazzar and his brothers, Varimathras and Detheroc for several months were not aware that the Burning Legion was defeated at Mount Hyjal. Only when Arthas returned with a "vacation" in Kalimdor, has announced the destruction of Archimonde. Arthas felt that their death will end this madness. Balnazzar and his brothers quickly teleported away from Arthas before he could ask them a blow.

Dreadlords plotted in the comfort of Tirisfal Glades and began to form a plan to destroy the undead king. They learned that Ner'zhul and Arthas repealed. At a secret meeting, they met with Sylvanas (which by the weakening of the power of the Lich King freed from under his power) and offered her time to dethrone the king. Sylvanas, hungry for revenge for her current state, and the murder of her people, she agreed. Balnazzar and his brothers prepared an ambush for Arthas in the ruins of the capital city, separating it from Kel'Thuzad and attacking with his allies. Balnzzar even threw dreadlords against him, but Arthas, reaching branches that were still loyal to him, he fled. And at least he thought so.

Escorted by a branch of Banshee, Arthas was attacked by Sylvanas, who prepared a long, horrible death for his killer and has already begun its work when Kel'Thuzad appeared, stopped the fight and forced Sylvanas to retreat. Although still alive, Arthas left Lordaeron, or Plaguelands, as it is now called this land, and Balnazzar could freely govern it according to their own tastes. Varimathras sent to Sylvanas attracted to their new order, but everything went differently.

Unfortunately for Balnazzar, Sylvanas had his own plans for the overthrow of Lordaeron. He defeated Varimathras brother Balnazzar who offered her his loyalty in exchange for his life. Sylvanas agreed and dreadlord fought at her side in an attack on Lordaeron. Balnazzar learned from his soldiers that Sylvanas. Varimathras forced to move to the page that Detheroc died, and that allied with the human darling, Garithos. Banshee and the rest of the forces attacked the base Balnazzar, and brought the city to riun. Even aided demons Balnazzar was attacked from two sides by Sylvanas and Garithos soon Balnazzar army was defeated.

Balnazzar remained in hiding, he joined the underground. With dissatisfaction sit until the undead legion exceeds Azeroth, creates a new plan to oppose ago. Possessed the body of the paladin Saidan Dathrohan, who had helped found the Scarlet Crusade, the knights took up one goal, the destruction of the Scourge and their like. However, established Crusade seems to be interested only in the fight against the Scourge and the mystery is that (thanks Balnazzar) Crusade is a tool of the Burning Legion, who still wants to destroy Azeroth. Balnazzar probably believes that serve the survival of the rulers of the Legion by destroying the Lich King. When the fanatical members of the Scarletj Crusade invaded the village, the leader of the invasion of Sir Thomas mistakenly killed his family. Sir Thomas becomes mad at that revelation attacked his fellow crusaders and was eventually killed, after which became completely mad. Shortly after his death, Balnazzar transformed into Sir Thomas and Sleepy Hollow.

Also, the final boss in Stratholme Living Side, or known principally as commanding the Scarlet Crusade. He begins to struggle as a Grand Crusader Dathrohan, but during the fight sheds his human disguise to accept his true face. his head may be needed and to Light's Hope Chapel to the task to enter Stratholme and kill Baron Rivendare; however, it can be found by someone who has just finished and handed the task of killing Archivist Galford. Note that if too quickly killed it does not happen to turn into ghostly ruler.

After the events in Northrend and the Undercity, Balnazzar shed his mask and kill other members of the Scarlet Crusade, using his necromantic umiiejętności to resurrect them as Risen.

Adventurers went to Stratholme and killed dreadlord. After the death of Balnazzar Eligor Dawnbringer states that after defeating the Dreadlord in mortal incarnation sends it back into the Twisting Nether. There Balnazzar can work with Varimathras and Detheroc once again.

Balnazzar is one of many demons summoned by Gul'dan in front of the Vault of Sargeras to attack the forces of Azeroth in a climactic, the disastrous battle of Abandoned Bank.

When Tirion was captured, Balnazzar guarded Ashbringer to ambush and take the body of which he claimed. Although he failed to, he vowed to go back in time, saying the new wielder of the Ashbringer That Their "journey together has only just Begun."

Balnazzar later leads an attack against the priests of Netherlight Temple, and the Knights of the Silver Hand arrive to aid the priests in its defense. Just as Balnazzar begins to summon demons in more and Dreadlord infused with the Light named Lothraxion, High Commander of the Grand Army of the Light arrives, sent by the High Exarch Turalyon. Lothraxion helps the Highlord of the Silver Hand to defeat Balnazzar.

Balnazzar attempts to stay in his possessed form as long as possible, so as to keep from revealing his true nature unless he is forced. He avoids using spells, unless they seem like one a paladin would use or he can make seem as if it came from a magic item. Balnazzar will only reveal his true form if pressed to do so and he wields a greatsword of wounding both as Saidan and himself, which his life force is tied to. If anyone else were to touch it, they would be corrupted as long as Balnazzar contacts the weapon. He is able to possess the body of any creature he has slain by turning into a misty cloud that possesses the body, driving out the soul. His energies preserve the body Balnazzar is possessing so that it doesn't rot and give him away. The creature that he is controlling can only be raised from the dead by a true resurrection as long as Balnazzar possesses it, while true resurrection would drive him out of the body. Being a dreadlord, he is able to use great demon and dark magic, which he often uses to attack his foes from a distance. 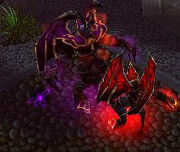 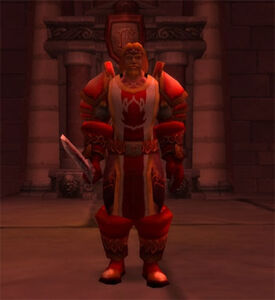