Being with women.
Drinking bourbon.
Gambling.

Make others fear him.

Balrog (known as Mike Bison in Japanese) is a former boxer who works for Shadaloo and a villain from the Street Fighter series serving as one of the main villains from Street Fighter II onwards. He is the first and, thus far, only African-American villain in the series not counting other versions.

Balrog grew up in poverty, but eventually became a heavyweight champion boxer and prizefighter. However, he was banned from boxing because of his illegal moves, permanently injuring his opponents, and eventually killing one. Balrog then joined Shadaloo and worked his way up the ranks, becoming one of M. Bison’s top enforcers.

On a mission for Bison, Balrog killed an elephant belonging to Dhalsim with one punch. On another occasion, he was ordered to kill Birdie and agreed, despite not knowing why. However, Birdie told Balrog about the Psycho Drive and the former boxer agreed to help him find it, hoping to profit from it. However, the Psycho Drive was destroyed and Balrog realized that he had not been paid recently.

After Bison was destroyed by Akuma, Balrog became the new head of Shadaloo. But he ruined the organization in no time at all and was forced to find more menial jobs such as working security at a casino, where his battle stage was set. How he got this job despite his criminal past is unknown.

When Bison was finally revived in a new body, Balrog was rehired into Shadaloo. He was given the task of protecting Bison’s replacement bodies, but he was unsatisfied with the job. Balrog began thinking of a way to make more money and eventually infiltrated the headquarters of SIN, looking for something he could sell. However, he found a young bandaged little boy, asking for help, and was uninterested in doing so at first.

However, a mark in the shape of Shadaloo’s symbol glowed on his hand and Balrog realized that he could possess valuable secrets. The former boxer took him away, saying it was his lucky day, but when he questioned him about his abilities, he revealed he was powerless on his own. Disappointed, Balrog said he was useless, though he decided that he could be useful later and took him away.

Balrog makes a return as a playable character in Street Fighter V.

As Bison sought the box known as Pandora so as to obtain its power, he ordered Balrog and Vega to head for it by an alternate route if things got complicated for him. Balrog was annoyed at having to work with Vega, but they decided to put their differences aside so as to fulfill their own ambitions of getting Pandora and keeping it for themselves.

In their ending, they set off on their journey, beating the other fighters seeking Pandora and finally defeated Ogre. Balrog tried to punch the box open, angered when he could not open it and Vega told him to shut up, having enough of his belligerence. As they faced each other, Pandora opened, empowering the two, and they finally threw themselves at each other, with Balrog saying that he would send Vega to a closed-casket funeral.

Balrog appears as a support spirit that boosts a fighter's neutral special move. His spirit battle is a stamina battle against Little Mac on the Omega form of Fourside where all fighters have reduced jump height. His spirit is one of the few that must be obtained in the World of Light first before appearing on the Spirit Board or purchased at the Vault Shop.

Balrog is cruel, greedy, selfish, arrogant, murderous, sadistic, loathsome, pugnacious, belligerent, manipulative, and temperamental, so he focuses constantly on profiting for himself, possessing a vicious mean streak. His main reason for working for Shadaloo is to become rich and famous so he can spend his life on easy street. Balrog will cheat, steal, or kill for this goal and has no sense of honor, cheating in fights whenever he feels like it, despite his fighting skills. Balrog also refuses to take responsibility for his own unfortunate circumstances, instead blaming other people. He is shown to be very unintelligent and irrational, as seen from the fact that he almost instantly ran Shadaloo into the ground during his tenure as leader. That said, he is at least smart enough to pull off simple tasks during Bision's schemes. Balrog is also attracted to all of the women that he meets, with Chun Li being the only exception.

Balrog is a tall, heavily built, and very muscular African-American boxer. He wears blue boxing trunks with white trimming and a torn white shirt under a blue tank top. He wears red boxing gloves and boxing shoes. His hairstyle consists of short hair in what appears to be wide cornrows; this hairstyle is similar to Mike Tyson's haircuts from the time Street Fighter II was released on February 6, 1991. Official artworks at the time also depicted him sans a canine tooth in the upper right side of his mouth.

In Street Fighter V, Balrog wears a blue openly hooded robe with yellow outlines and ripped sleeves, at the back it has the design of "Crazy Buffalo" in a black round sign, a large gold crown with clouds and several red stars, the outline on his boxing gloves are black with gold star designs, his boxer shorts are black and he wears matching boxing boots with white outlines.

His first alternate costume is a business attire similar in design to the one he wore in Street Fighter II V, the sleeves are rolled up into cuffs, his boxing gloves are gold and he wears sunglasses.

His second costume has a little resemblance to his primary outfit but in a United States flag motif. He wears a white and red striped long sleeve hoodie, blue trousers with white star designs, white sneakers, and fingerless gloves.

Balrog is a skilled boxer, but his fighting style has a number of moves not allowed in boxing such as stomping on his opponent’s feet and headbutting. His moves include Dash Straight, a powerful charging punch, Buffalo Head, where Balrog leaps into the air, striking his opponent with his head, Gigaton Blow, a powerful turning punch, where he charges into his opponent, and Dirty Bull, where he grabs his opponent, head butts them, stomps on their foot, and finishes by hitting them in the face with his elbow. As with most of his fellow Street Fighters, Balrog also has super human strength, speed, and durability. He once killed an elephant with a single blow. 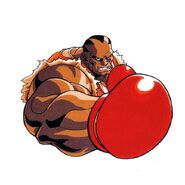 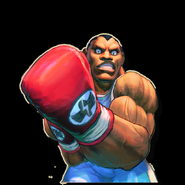 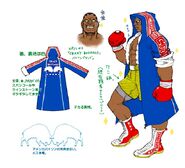 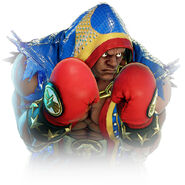 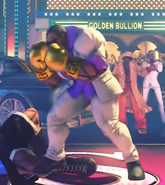 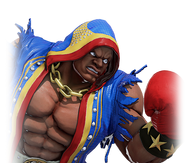 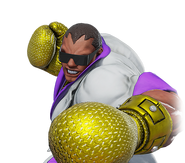 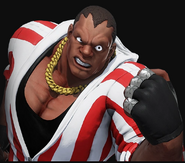 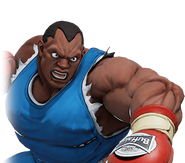 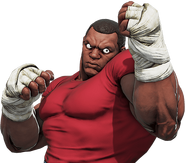 Retrieved from "https://villains.fandom.com/wiki/Balrog_(Street_Fighter)?oldid=4313124"
Community content is available under CC-BY-SA unless otherwise noted.