Balrogs, as they are known in Arda (real names Valaraukar), are an extremely powerful demonic race of fallen Maiar found in J.R.R Tolkien's fantasy universe of Arda and Middle-earth. The most notable demons of the First Age, they are noted as being a race that have undergone heavy changes by Tolkien as he began to alter them from a race that was once numerous enough to be described as "hosts" to beings that "at most" numbered seven at a time.

In his published works, Tolkien depicts the Balrog as being barely a shape wreathed in shadow and flame - possibly man-shape, yet greater. He also described the Balrog as being only "several feet taller than an average man". Balrogs seemed to encapsulate and project power and terror.

Balrogs were originally Maiar, similar to that of Sauron and Saruman, but after Morgoth's fall into darkness they followed after him and became his demon servants. The creature is reffered to as the Balrog of Morgoth. Morgoth is ultimately the root of all evil in Middle Earth. Gothmog, High-Captain of Angband, was the Lord of Balrogs. During the Fall of Gondolin Gothmog and the Elf Ecthelion fought, both dying when they fell into a Fountain. Another Balrog fought Glorfindel as the Elf protected refugees from Gondolin and they both fell to ruin in the abyss. Most of the remaining Balrogs were slain in the War of Wrath that ended the First Age, though at least one escaped. The demon is encountered in the Mines of Moria, and seems feared by all goblins and orcs that have taken over the tunnels in the mountain.

Durin's Bane lived in the darkness of Khaz-a-dum, known to the Elves as Moria, a deep place of the world, being older and more monstrous than an orc or goblin. In TA 1980 the Dwarves dug too deep for mithril and woke the Balrog. It slew the Dwarf King Durin VI, and the next year Durin's son Nain I. The Dwarves were driven out of Moria. In 2799 at the Battle of Azanulbizar the Dwarf Dain, later Dain II, King of Durin's Folk, when he pursued the Orc Leader Azog to the Gate of Moria and slew him, saw Durin's Bane. He told his father's cousin Thrain II, that Moria could not be taken.

The Lord of the Rings contains only a brief encounter with the demon; this particular Balrog had no true name and was refered to as Durin's Bane or the Nameless Terror. In TA 3019 the Fellowship of the Ring are forced to enter Moria. The Balrog discovers them, scares off the goblins surrounding the fellowship and follows them to the bridge of Khaz-a-dum. The fellowship of the ring make it across the bridge, but Gandalf stays behind, and prevents the beast from crossing, shattering the Balrog's sword. He uses his magic staff to break the bridge, but as Durin's Bane falls into the chasm below, it wraps its fiery whip around Gandalf's legs and drags him down with it. After a long fall, Gandalf and the Balrog crash into a huge underground lake, which extinguishes the flames of the Balrog's body, leaving it severely weakened and forcing it to retreat from the wizard. Gandalf then pursues the beast for several days, chasing it out of the tunnels and onto the highest peak of the mountains of Charadras, where its flames explode back to life. The Balrog is eventually defeated and cast down onto the mountain side, dead. 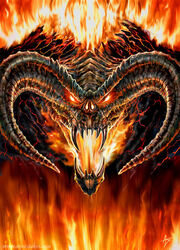 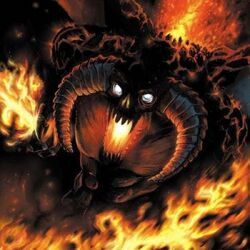 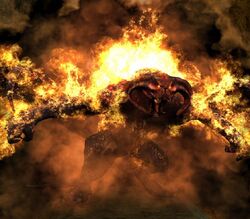 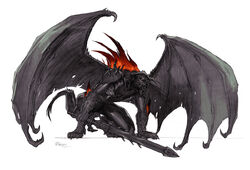 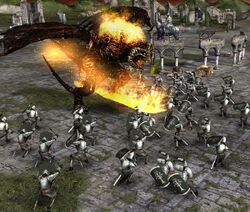 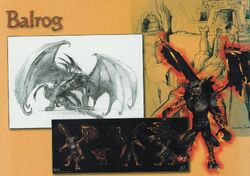 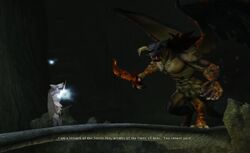 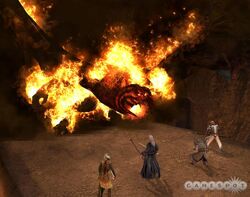 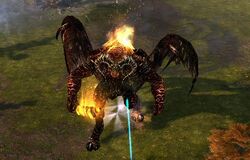 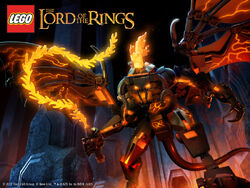 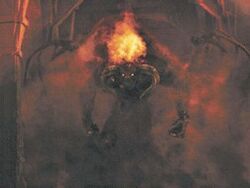 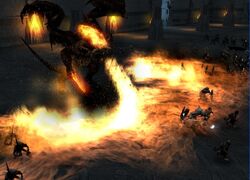 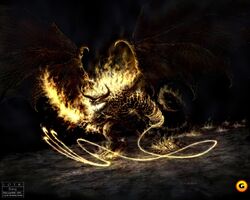 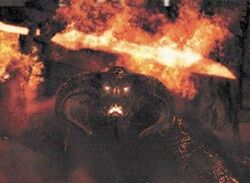 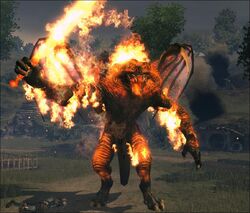 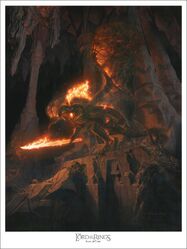 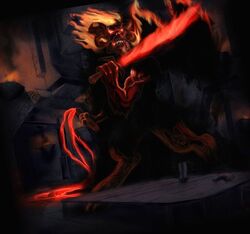 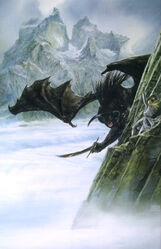 Glorfindel fights against a Balrog.
Bel2.jpg
Add a photo to this gallery