God of Fire
God of War
God of Fire, War, and Challenge
Mightiest of the Six
God of Mass Murder
Bastion of Martial Glory
Blade of Conflict
Bringer of War
Finder of Wisdom
God of Strife
He That Shows Us the Final Truth
Judge of the Powerful
Master of Might
Master of War
Paragon of Bloodshed
Revealer of Strength
Scourge of the Prideful
The Sacred Sword
Lazarus

One of the Six Human Gods

His hounds, Temar and Tegon.

Waging war against his half-brother, Menzies.
Waging war in general.

Gain money and army from the White Mantle.

Get souls from the Mists for his Forged army (all succeeded).
Kill the Pact Commander (succeeded, reversed).
Ally with the Pact Commander (claimed, failed).
Obtain the powers of the Elder Dragons.
Kill Kralkatorrik.
Have revenge at the other Human Gods (all failed).

He is voiced by Peter Jessop.

Balthazar is the God of War, Fire, and Challenge. He was the second of the Six Human Gods to arrive to Tyria from an unknown place in the Mists, claiming the world for humans. He had urged humans to wage wars against other races, while he himself waged a war against his half-brother Menzies. The Gods eventually settled in the holy city of Arah, being drawn by its magic, bringing many other powerful artifacts for keeping and studying. They also eventually learned of the Elder Dragons, realizing the dragons are more powerful than they are. In 1 BE, the Six decided to gift magic to the mortal races, with Balthazar's own sword Sohothin and its twin Magdaer being given to humans. The gift, however, left the races greedy, starting numerous new wars. After sealing the magic into Bloodstones, Abaddon, another god, turned on the others over splitting the magic. After defeating Abaddon, the Five had decided not to intervene in Tyrian affairs to prevent further destruction. After the awakening of Primordus in 1075 AE, most gods held the opinion to leave Tyria for good as the God's interference would make things only worse. However, Balthazar disagreed with them, as he craved for more war and was ready to add the Elder Dragon's powers to his own. Eventually, Balthazar had threatened the other Gods, which led to his imprisonment and stripping of his powers. Balthazar remained imprisoned until 1328 AE, with his freedom starting the events of "Living World Season 3" and eventually "Path of Fire."

Balthazar's appearance is that of an older human man. Under his great helmet he has graying hair and beard, with his face being partially covered in war paint. His regalia, with the motif of chains, hints at his former imprisonment. As one of his domains is fire, the armor itsef has several fiery parts. His weapon of choice is a fiery greatsword that can act on its own. On paintings and statues, Balthazar is usually depicted with his two hounds and the greatsword. 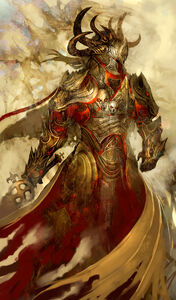 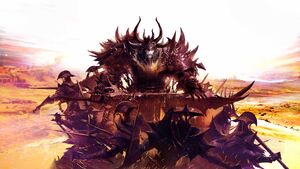