Kill any who are a danger to the homeless.

The Band-Aid Nose Man (also nicknamed the "Trashman", which is erroneous as this is actually the name of his creator) is one of the certain X-Files villains who appears in the episode "Home Again".

He is a malevolent tulpa and one of the "monsters of the week" of the revived X-Files - set several years after the original series and a continuation of the popular myths, of which the Band-Aid Nose Man is a tribute in himself.

The concept of tulpas have been explored in the earlier series with the Ubermenscher. At some point in time two homeless men (the Trashman and the Painter) combined their imaginations to create the concept of the Band-Aid Nose Man, a protector of the homeless - however this concept would soon come to frightening reality as the Band-Aid Nose Man emerged as a murderous tulpa who would stalk and brutally murder anyone it saw as a threat to the homeless.

The Band-Aid Nose Man possessed superhuman strength, immunity to almost all physical pain or damage, the ability to appear in any place he desired and the supernatural ability to cause lighting and electricity to stop in his presence, lunging an area into darkness - as a thought-form he was also effectively immortal until he accomplished his task at hand and would vanish without a trace once said task was done, having never truly existed (yet in a paradox all deaths the creature caused remained a physical reality) : the Band-Aid Nose Man's manifestation was also horrific and traumatizing, being a monstrous humanoid made of trash and rotting filth, dripping maggots and other obscenities, further feeding on the fears of those it stalked.

Like all tulpas encountered in the show he can not be stopped nor killed until he has accomplished his task or his creators die - in his case he ceased to exist after fulfilling what he believed was his ultimate goal (while the Ubermenscher died due to its creator being killed). 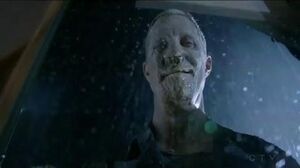 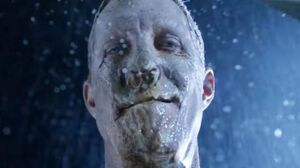 Retrieved from "https://villains.fandom.com/wiki/Band-Aid_Nose_Man?oldid=3887058"
Community content is available under CC-BY-SA unless otherwise noted.